I had no interest in watching Horns.  Apparently, this is something I share in common with the majority of Americans, who did not flock to see the film adaptation of the novel by Joe Hill (aka Stephen King's son).  A King fan at work insisted I watch it.  With that recommendation, I set out to see Horns, with also a curiosity to see how Daniel Radcliffe could sound as an American (his Harry Potter co-star Emma Watson doing OK but not completely convincing).

Ratcliffe sounded fine.  It was the rest of Horns that was horrible: a film tonally deaf with characters I didn't care for, an almost monstrous view of humanity, and one that simply never decided what it was going to be.

Ignatius "Ig" Perrish (Radcliffe) is accused of murdering his girlfriend Merrin (Juno Temple). He protests his innocence but no one, not even his family, believe his claims of innocence. Despondent over her death and his town's reaction, he turns to drink and lives a dissolute life.  After one particular night of boozing, culminating in Ig urinating on Merrin's memorial and being beyond angry with God, he wakes up to find he has two small horns growing out of his head.

These horns are an embarrassment to him, but they also now give him strange powers.  The horns give him the power to release the darkness within others, not only by revealing other's deepest darkest secrets to him but making others act out their hidden desires, usually sexual.  Ig now sees this as a chance to clear his name.

He seems to delight in getting other people to do all sorts of wicked deeds (burning down buildings, indulging in forbidden sex), but he also remembers his time with Merrin and the bond he has with his friend/lawyer, Lee (Max Minghella).  One of the people who might know more than he says is Ig's brother Terry (Joe Anderson), who drove Merrin away on the night in question, that fateful night when she broke up with Ig.

Did Terry do it?  Ig and his snakes believe he had something to do with it, and Ig has his own brother overdose on drugs.  Things take an ugly turn when Ig meets up with Lee again, who has been wearing Merrin's necklace (one that has a cross on it).  Once the necklace is removed, the truth is revealed at last: Lee killed Merrin after raping her, for he has always lusted after her and was jealous of her and Ig's relationship.  In the struggle, Lee attempts to kill Ig by having his car jump into the bay, but the only result is Ig being horribly burned.

Ig now seeks total revenge, and all hell breaks loose.  In the end, Lee is brutally killed himself, and Ig is too, but in some afterlife, he and Merrin are together again. 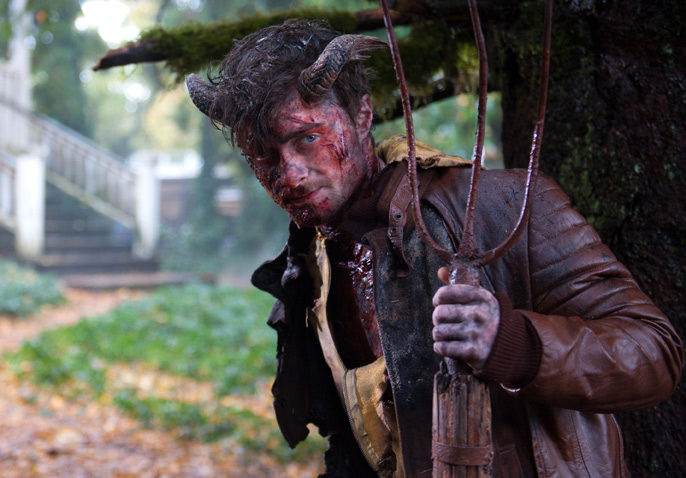 For me, Horns biggest flaw was that it never knew what it wanted to be. Director Alexandre Aja and screenwriter Keith Bunning never settled on whether Horns was a comedy or a horror film.  They never even committed to trying both because one element would end up undercutting the other.

You have horror when you see Ig horribly disfigured, his face burnt, even at one point holding court with snakes and a pitchfork.  You then try to shift to an odd comedy when he goes to Merrin's father, who has no reaction to seeing Ig with horns and a burnt-out face.

You have comedy at a bar fight, and then horror when the bar owner burns down the place (can't remember if there were people inside it).  You have real horror when Lee literally blows the head off Eric (Michael Adamthwaithe), a scene so ghastly, so grotesque that it isn't funny but downright revolting.

Though shortly after, seeing a snake go into Minghella and blow him up gives that a good run for its money.

Horns doesn't have anyone to root for.  As played by Radcliffe, Ig is a pretty horrible person, one you almost want to believe raped and murdered his girlfriend because his general demeanor is so unpleasant.  No one in town appears to be close to good (hence how just about everyone in town goes all bonkers whenever he shows up).  Ig is dumb (both smoking and using an inhaler) and unpleasant (urinating on the memorial of the woman he was passionately in love with).

The closest person to appear semi-kind is Merrin, and she is romanticized to an almost laughable manner with seemingly endless flashbacks to their long and lush romance.

I can't say that the mystery is all that mysterious, given that it is pretty obvious who killed her (even with a few false clues thrown in to try and implicate poor Terry).

Horns also tries to be too clever with all the Biblical references (such as Eve's Diner, down to the apple).  It all conspires to make Horns clumsy, grotesque, and foolish in its efforts to be witty, sharp, and good.

There really is nothing in Horns that would be good: not the performances, not the story, not the effects, nothing.  Delighting in its own grotesque nature, Horns is not clever or funny enough to be witty and its efforts at comedy cut away from its efforts to be straight up horror.

It's a waste of everyone's time: those watching and those who made it.