What Ever Happened to Baby Jane? A Review (Review #910) 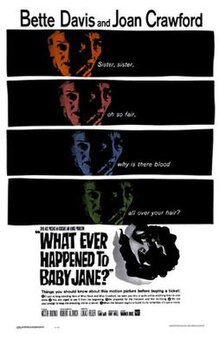 WHAT EVER HAPPENED TO BABY JANE?

Now that Feud: Bette and Joan has ended, it is time to look at the product at the heart of that sad and sordid story.  An equally sad and sordid story, What Ever Happened to Baby Jane? might be the low-rent version of Sunset Boulevard, another tale of how Hollywood discards former 'stars' and how those people let their past destroy them.  Part camp horror, part psychological thriller, What Ever Happened to Baby Jane? joined forever two strong actresses whose total loathing for each other, as we saw, made for great drama.

As for the film itself, it still is delightfully creepy, a Gothic horror tale with some macabre humor.

Jane Hudson (Bette Davis) was once a vaudeville child star billed as "Baby Jane" or "Baby Jane Hudson".  Adored for her Shirley Temple-like persona (complete with Baby Jane dolls), she was actually a mean little girl: spoiled and uncaring.  Her older sister Blanche (Joan Crawford) endured being ignored by her showbiz father until the 1930s, when it was Blanche, not Jane, who found success on film.  Jane became a hopeless drunk, and one fateful night Blanche suffered a paralyzing injury in a car accident involving both sisters.

Now, they live together in virtual seclusion and isolation, shut off from the rest of the world.  Jane, bitter, angry, alcoholic, vindictive and a lot bonkers, 'cares' for her crippled sister Blanche more out of guilt and necessity (Blanche's checks keep them solvent) than out of genuine love for the more successful Blanche.  They have no visitors save Elvira (Maidie Norman), a housekeeper who constantly warns "Miss Blanche" of "Miss Jane" and her cruelties.

Those cruelties go up now that Blanch Hudson is having a bit of a comeback with her films airing on television, but Blanche is unaware of it since Jane throws out all the fan mail.  That's not the only thing she throws out: Jane now is aware that Blanche is about to sell the house and perhaps put Jane away in a home/institution.

To counteract Blanche, Jane plans her own comeback, and in comes Edwin Flagg (Victor Buono), a second-rate pianist/composer living with his mother.  Edwin sees the ad for an accompanist and goes to see Jane.  He's shocked at this old woman still dressing like a six-year-old girl (complete with curls), but his need for money outweighs any qualms he might have.

Blanche now lives in terror of Jane, and with good reason.  Baby Jane has served her sister both her pet parakeet and a dead rat for dinner and is showing signs of slipping further into insanity (though I figure the dead rat thing would be proof enough).  Blanche is desperate for help: attempting to attract the attention of the neighbors or even crawling downstairs to get to a phone.  Nothing doing: Jane always finds out her sister's plans and deals with them, sometimes brutally.

The most brutal is when Elvira forces her way into the house after being fired by Jane and finds Blanche bound and gagged.  Jane takes a hammer and kills Elvira.  She knows she has done something awful, but now cannot find a way to fix any of it.  Edwin, for his part, won't hear anything Mama has to say, determined to get his meal ticket (and his money).  It isn't until he stumbles, drunk, to the Hudson house and discovers Blanche himself in her sorry state that he flees.  He also informs the police, and by now Jane is completely out of it.  Dragging her sister out, she decides to make a run for it.

Jane takes Blanche to the beach and their memories of happier times, by now Jane totally divorced from reality.  The police have found Elvira's body and are now searching for the famed Hudson Sisters.  As Blanche lays dying, she makes a final, shocking confession to Jane.  The police finally find them, and Jane, now totally immersed in her own fantasies of being a child star again, performs a little dance for the beachgoers, who gawk at this freakish sight.

What Ever Happened to Baby Jane? revels in its creepiness and macabre nature.  When Baby Jane recreates her signature song, I've Written a Letter to Daddy, for Flagg to accompany her with, there's something psychotic and eerie about the whole spectacle, a mixture of mirth and madness that creates both a shocked and oddly humorous reaction.

Part of you might see it and be horrified at how ghoulish it is: a woman in her fifties attempting to be a girl of six, with garish makeup, hair and clothes.  Part of you might also be highly sympathetic, almost sad, for Jane Hudson the woman who still sees herself in a way as Baby Jane (unless its to drink, when she sees she's all woman).

Baby Jane is one of Bette Davis' greatest screen performances.  In the almost grotesque nature of Baby Jane, she manages to make her a monster (Baby Jane was voted one of the 50 Greatest Screen Villains), but also make her tragic, almost sympathetic.  There are times when she sees how far off the deep end she's gone, and in those moments of lucidity, Davis just about breaks your heart.

As much as Davis might not want to have seen it, Joan Crawford is certainly her acting equal in this film.  Her Blanche was one of great sympathy.  While Davis had the creepier (and showier) role, Crawford is just as effective as the concerned Blanche, trapped in a nightmare.  She comes across as actually very gentle and sweet, which is why you want her to escape this horror, and which makes the actual truth revealed at the end all the more shocking but understandable.

I mentioned that What Ever Happened to Baby Jane? could be the low-rent version of Sunset Boulevard, and that's not just because it covers similar territory (faded stars living out their lives in isolation and delusion, holding on to what was and refusing to see what is and wanting to make 'a comeback').  At one point, Edwin looks around the house's parlor and is flooded with pictures of Baby Jane in her prime.  That evokes memories of how Norma Desmond had her own parlor in Sunset Boulevard: a tribute to herself in her glory days.

In his small but breakout role, Buono is slightly creepy himself as the hanger-on Flagg, mean towards his tottering old Mum while not ashamed to take advantage of someone's borderline senility to benefit himself.  He finds the humor of being presented with an authentic Baby Jane doll, and his use of it causes Jane one of the few frights she suffers.

Director Robert Aldrich never got as much credit as he should have for putting this freak show together.  He got great performances out of his two divas, and managed to skirt around censors by using the doorbell to cover up a certain b-word Davis uses to describe her sister.

There are a few faults within What Ever Happened to Baby Jane?.  One can clearly see in the final scene which shots were made on location and which were made in the studio.  Elvira must have been pretty stupid to have taken so long to open the door to Blanche's room (for if she had just smashed the lock with the hammer, she would have found Blanche sooner and gotten to the police).  She was also pretty dumb in leaving the hammer unattended (and it was pretty obvious what was going to happen, though perhaps it was meant to be obvious).

Still, on the whole What Ever Happened to Baby Jane? can be enjoyed as straight horror or slightly camp.  It has strong performances from both Bette Davis and Joan Crawford and a macabre story that will surprise and even shock with the twists it takes.  Horror and hysterics never mixed so well.