Professor Marston and the Wonder Women: A Review 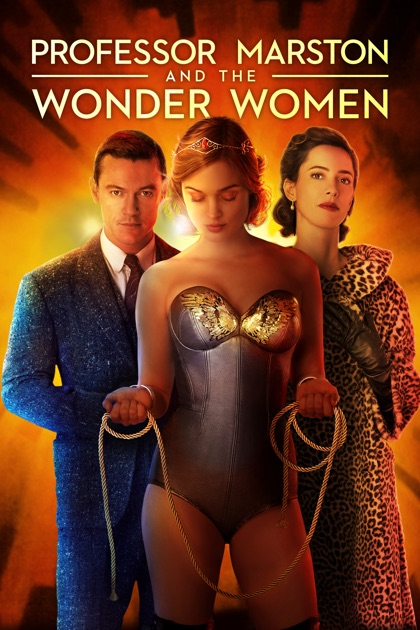 PROFESSOR MARSTON AND THE WONDER WOMEN

Truth, I'm told, is sometimes stranger than fiction.  Just like few could have imagined the creation of Winnie-the-Pooh was a horror story, few could also have imagined the creation of Wonder Woman was an origin story filled with S&M and pretensions of intellectualism.  Professor Marston and the Wonder Women is at times quite beautiful, but it is also at times almost demented and choppy with 'characters' who come across as bordering on bonkers.

Using the framing device of an interrogation in 1945 by Josette Frank (Connie Britton), director of the Child Study Association of America, Professor William Moulton Marston (Luke Evans) is being questioned about how his superhero Wonder Woman came to be, along with the suggestions of bondage and lesbianism can be interpreted.  Marston defends his creation and openly states that he sees Wonder Woman as a vehicle for propaganda, refusing to make apologies or excuses for the not-quite-subtle or overt sexual nature of the comics.

Marston started out in the film as a well-respected professor of psychology at Harvard's sister college Radcliffe while his equally if not superior wife Elizabeth (Rebecca Hall) is continuously denied a Ph.D. from Harvard because she is a woman.  Into their lives comes Olive Byrne (Bella Heathcoate), who is extremely attractive. Our randy Professor Marston is instantly attracted to the pretty and engaged coed, and Mrs. Marston knows that.

Fortunately, their superior intelligence allows them some leeway into matters of the heart and groins, so Olive can serve as their lab assistant as they work to perfect a lie detector test.  It isn't long before libidos start going off all over the place, as Will gets a hard-on for Olive, while Olive gets her jollies from Elizabeth.  Elizabeth, for her part, is unsure about any attraction to her husband's new obsession, but eventually they all start falling into bed with each other.

Eventually, Marston comes up with 'Suprema the Wonder Woman' and pitches the idea to various comics, where it is picked up after simplifying things to just 'Wonder Woman'.  Unfortunately, a good neighbor accidentally walks in during a little menage a trois, causing a mini-scandal.  Olive is exiled for the sake of propriety, but after William discovers he is dying of cancer he engineers a reconciliation.

After his death, the two women live together for the next 38 years, and their shared creation becomes an icon.

Professor Marston and the Wonder Women may stick close to the reality of this unorthodox group, but it does one type of disservice to the Marstons and Olive Byrne.  It makes them all extremely unpleasant people: smug, generally unlikable and almost arrogant in their sense of moral and intellectual superiority.  Professor William Marston comes off the worst, especially when we go to the 'present' or near-present of his smoke-filled interrogation, which appears to be taking place in an abandoned building.

Every time he spouts off about how his creation is meant to inspire young boys to submit to strong women, how Wonder Woman is a vehicle to promote his own theories, how unapologetic he is by the overt shout-out to bondage in a medium targeted primarily at children, he comes across less as a pioneering 'woke' male feminist and more as a pompous ass/ass-freak.  The film, rather than making him the hero it wants us to see him as, turns him into someone who sees himself above 'morality'.

In an odd sense, William Moulton Marston seems a prototype of all people, Ayn Rand, who had similar ideas about sex: she having a long-term affair with a young man with the 'consent' of her husband.  Only difference is that Frank O'Connor, Miss Rand's long-suffering husband, didn't share in the hijinks.

Also odd is how the film made the women, in their own way, subservient to Marston.  Granted, this is I figure how they wanted it and lived their lives, but for every time Elizabeth raised any objections whether to his dalliances or how irrational it looked to outsiders, eventually she gave in.  "When are going to stop justifying the whims of your cock with science?" Elizabeth shouts at William when he has Olive literally tied up.  That is as far as she ever got to telling her kinky husband off, but soon enough Elizabeth found the joys of rope.

Again, I figure this is how the three of them lived their lives, but it is hard to accept that Elizabeth and Olive were the inspirations for our noble Amazon warrior princess when they seem to in real life submit to the sexual desires of the man who does them both.

It may be truth, but it does weaken them and make the case that far from being strong, they submitted to the whims of Marston's cock.

At times, Professor Marston and the Wonder Women was a little too on-the-nose visually.  When they finally gave in to their carnal passions it was not exactly a full menage a trois in that the three of them weren't going at it simultaneously, but as Olive and Elizabeth took turns on William and he would watch them in turn, writer/director Angela Robinson made it look sublime. When we see Olive clad in her Amazonian garb, the shout-out to the future Diana Prince again is a little too obvious.

I cannot find fault with the performances, if we are meant to think through Luke Evans that Marston was a slightly pompous sex freak or that Heathcote's Olive was a surprisingly weak woman.  Hall as Elizabeth, however, was slightly different.  She was allowed some range as the occasional voice of reason who did have a sense that their life together was not conventional versus Marston and Olive who appeared to think there was nothing even remotely strange in their collective goings-on.

Professor Marston and the Wonder Women is at times quite luscious, which I figure applies to Evans, Hall and Heathcote as well.  Perhaps a little more time on the actual creation of Wonder Woman and a little less on the sex-romps of this curious trio might have helped the film.  Despite everyone's best efforts, you leave the film thinking this group is shockingly self-absorbed in their sense of superiority sexually, mentally and morally and frankly a little nutty.