The Olympic Games in Paris 1924: A Review 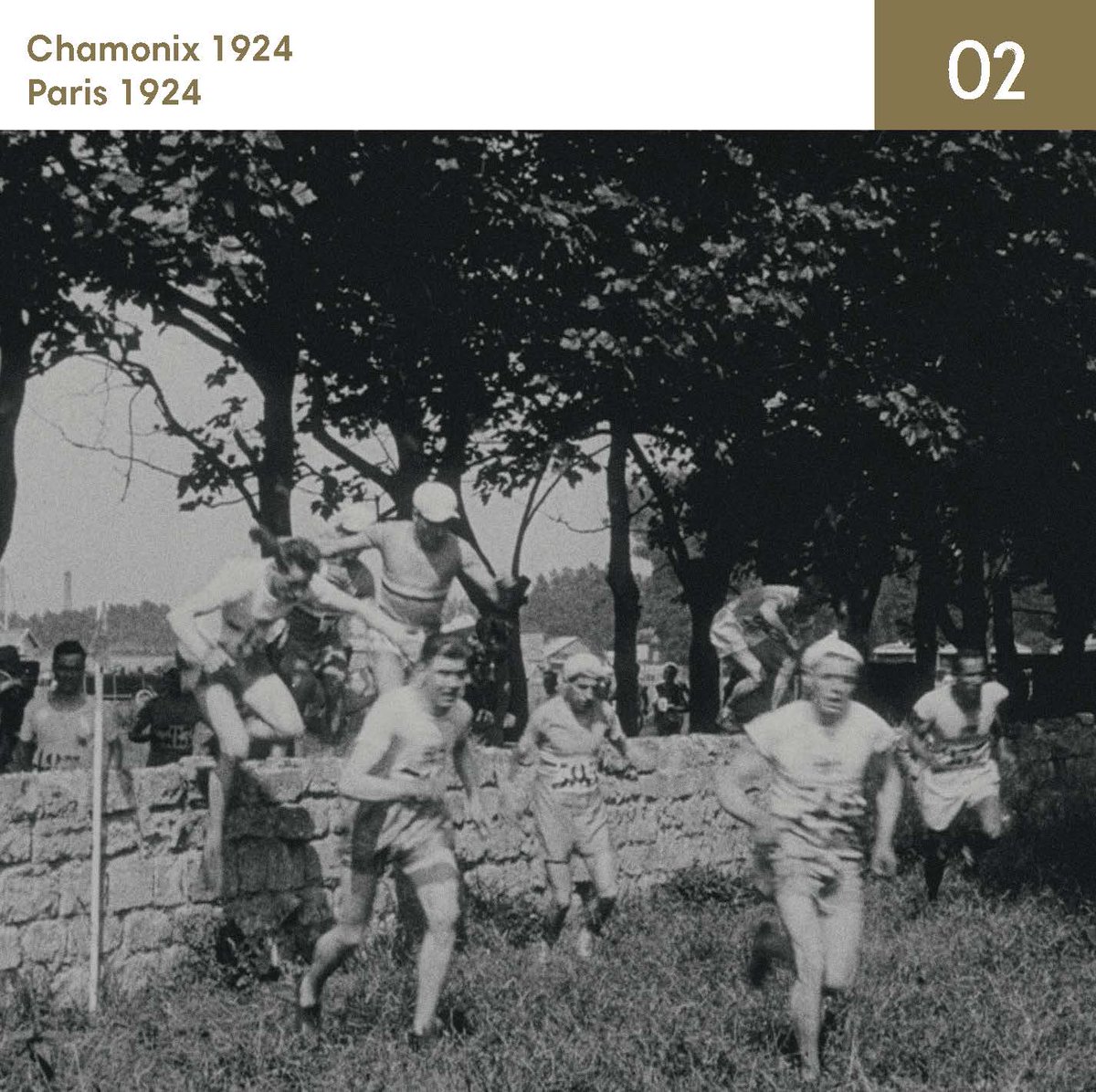 THE OLYMPIC GAMES IN PARIS 1924

There were no Olympics in 1916 due to World War I.  It appears that there is no film of the 1920 Antwerp Summer Olympics, as we skip over them entirely to go to the 1924 Paris Summer Olympic Games.  The Olympic Games in Paris 1924 themselves were still a bit of a jumble, but strides were taking place to make it the Olympic Games we all know, if not love. The film of those Games is notable for among other things being the culminating event of the film Chariots of Fire, but while other events are interesting, The Olympic Games in Paris 1924 is shockingly short on information for a film that runs nearly three hours.

The chronicle of the VIII Olympiad covers a wide variety of events, with swimming, racing and athletic events receiving dominant coverage.  We do get some other events, some that might be surprising to present-day viewers.  For example, the slack-rope event is essentially rope-climbing, so to see something that has been the bane of many middle-school students be an Olympic event might prove either puzzling or amusing.

Some aspects of the VIII Olympiad are quite interesting in terms of history.  Johnny Weissmuller, who would later achieve greater fame as Tarzan in a series of successful films, made a literal splash, where we see him briefly as a master of the swimming pool.  We also see some footage of British runners Harold Abrahams and Eric Liddell, whose stories were later immortalized in Chariots of Fire.

Other aspects show the time and place where these Olympics took place.  During the marathon, we see the runners stop briefly to get water to drink or splash themselves with, but it wouldn't be a French race without some of the marathoners having a touch of wine to wash down their thirst.  We also see that the female participants in the various events like swimming or tennis were routinely billed as 'Miss' or 'Mrs.' while their male counterparts were more often than not given their full names. 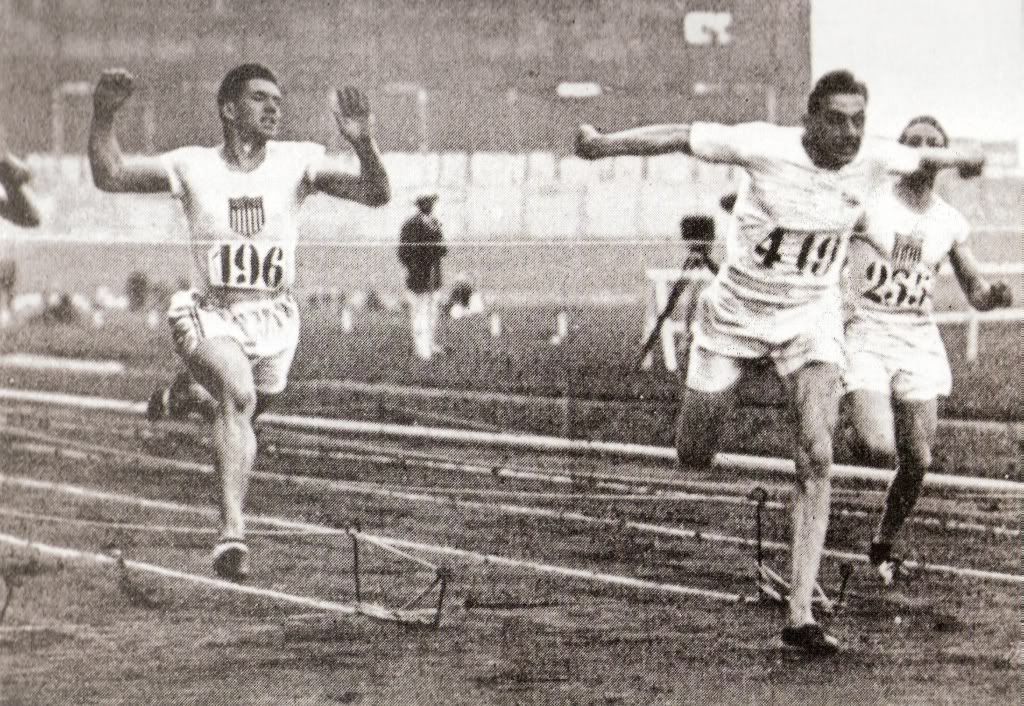 Going along with the casual sexism, the titles show a surprising, even shocking amount of racism in them.  As part of the Opening Ceremonies, we are treated with one title card that reads "The athletes, the flowers of their race, showed the finest exemples (sic) of courage".  When an African-American wins in the long-jump, the title card reads, "The Negro Hubbard the winner".

That would be DeHart Hubbard, the first African-American to win a gold medal.

Leaving aside the casual sexism and racism of the times, director Jean de Rovera appeared to not know English or know anyone who did.  Some of the spelling errors in the title cards were at times bizarre.  There's the aforementioned 'exemples' and another time there is a mention of 'reggards' for the swimming; then there is when the film chronicles a rather lengthy demonstration of the 'danish' gymnastic team.  This looks more like a series of exercise routines, and it has the added curious aspect of looking vaguely homoerotic, with all those well-built shirtless men flexing and flying about.

Other aspects of The Olympic Games in Paris 1924, however, show that people have not changed.  During the football-rugby gold medal match between the United States and France, we see an American fan in the throes of excited cheering.  The U.S. demolished France 17-3, and it also makes one wonder 'Americans played rugby'?

The events themselves were at times hit-and-miss.  A highlight is the football/soccer game between the gold-winning Uruguayan team and a shockingly inept Swiss team.  We see that the Swiss goalie did nothing but stand there, letting the ball go in.  This is a sharp contrast to the Uruguayan goalie, who was a fierce defender and constantly batted the ball away from the net, oftentimes over the net.

After they shock by winning, we see the victorious and thrilled Uruguayans at the photo call.  The thrill of victory is clearly making them giddy and a bit cheeky, as they fool around with each other while posing.

The Olympic Games in Paris 1924, more than previous Olympic films, uses slow-motion photography to excellent use.  We see this at various events such as the steeplechase, the equestrian events, tennis, rugby and soccer.  The use of the slow-motion at some of these events makes things not only clearer but at times more beautiful.  The pole-vault jump by (Lee) Barnes is a true thing of beauty and a metaphoric leap in filmmaking and sports coverage.

There has been some use of slow-motion, but I cannot remember it being as strong or as beautiful as in this film.  The use of it, for example, not only showed the beauty but the danger of the riding event.

Sadly, The Olympic Games in Paris 1924 has some major drawbacks.  First, de Rovera has a great deal of footage of the 'danish' gymnastic team but very little of Abrahams and Liddell, which would ultimately prove of greater historic importance.  It also holds a rather sad footnote.  The fencing competition is shown briefly at the Velodrome d'Hiver, where a mere 18 years later French Jews would be rounded up there before being deported to their deaths.  The conditions at the Velodrome d'Hiver before they were sent off to die were appalling in and of themselves, and to know that this place to celebrate French pride would later become a source of French shame is saddening. 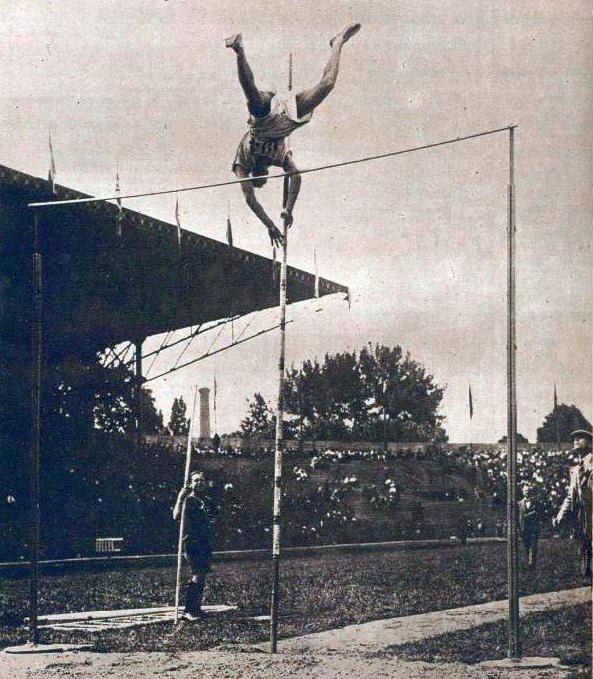 Granted, de Rovera can hardly be blamed for the Velodrome Roundup or for not being aware that Abrahams, Liddell and Weissmuller were to achieve greater fame past 1924.  However, for a film that chronicled the Games, perhaps in retrospect more time at the athletic racing and less time at the 'danish' gymnastics might have helped.

One thing that did not help was Donald Sosin's score.  He seems absolutely determined to keep within the times by using a piano-dominated score.  He's done this repeatedly with all his Olympic film scores, and while more often than not it works, here, it was not as good.  Sosin at the gymnastic coverage either was influenced or straight-up lifted Eric Satie because the music was very Satie-like.  Sosin used some percussion at the marathon to great effect, and I do wonder why he opted not to have more of that.

He also missed a great opportunity at the tandem bicycle coverage.  Why he did not lift a little Daisy Bell (On A Bicycle Built for Two) as the two riders were off is a puzzle given that it would have been a perfect opportunity to have a little fun with things.

The Olympic Games in Paris 1924 is probably best for hardcore Olympic enthusiasts as there is not much here that would really excite the more casual viewer.  The big important historic moments get unintentionally shortchanged and at almost three hours it can be a bit punishing if rope-climbing and tennis from a spectator's point-of-view is not your thing.

There are some beautiful moments in the film thanks to the great use of slow-motion, and in some events you will find yourself as caught up as the American fan at rugby was.  However, by and large the film is good for historic reasons but not for a quiet viewing at home.