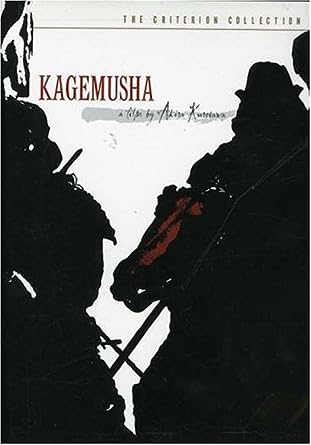 Akira Kurosawa is held as one of the Great Directors, a master craftsman of cinema.  This is a well-earned reputation, especially in his early films.  His latter films still had sparks of brilliance, though Kagemusha, at the end of his career, may be more for the Kurosawa lover than for an average film-goer. This is not the film I would use to introduce him/her to Kurosawa, mainly due to length and subject, but it still has enough of his brilliance to make it a worthwhile visit.

Japanese warlord Shingen along with his brother Nobukado (Tsutomu Yamazaki) find a petty thief about to be crucified who bears a striking resemblance to Shingen. This thief will now become Shingen's double, essentially a 'kagemusha' (shadow warrior).  The thief (Tatsuya Nakadi in a dual role) is a little bit bonkers, but hardly in a position to argue.

The plan is to use the double on special occasions as needed, but as Shingen is laying siege to a castle, a sniper gets the warlord.  Shingen extracts a promise to keep his death secret for three years, lest his enemies take advantage.  Now, the kagemusha is forced to go through this charade full-time.  At first, he refuses, especially after discovering Shingen's preserved body inside a massive jar.

However, while spying Shingen's courtiers sailing to a lake with his body, the double discovers that enemy spies have seen this too.  He then offers his services, and a cover story is created that the massive jar was really sake and that the jar was an offering to the gods for victory.  This rouse seems to work, but Shingen's enemies are still suspicious about the goings-on around Shingen.

For his part, the kagemusha is bonding with his somewhat dubious grandson, while Shingen's own son Katsuyori (Ken'ichi Hagiwara) is highly irritated by the shenanigans, as it will mean he has to wait three years to take full command.  Shingen's heir attempts to trick the kagemusha into revealing his true identity despite the careful training and coaching the courtiers have given him, but for once the kagemusha manages to outwit his opponents.

The other warlords still have doubts and decide to strike anyway.  The courtiers want a more measured approach, but Katsuyori won't be denied.  Soon, the kagemusha becomes a pawn in everyone's plans, with him powerless to do anything on his own.  He soon starts being haunted by the real Shingen, dreaming he has come to stomp him out.

Eventually, the kagemusha soon takes on too much of Shingen's manner and is thrown from Shingen's horse, who is not fooled.  The deception unmasked, the thief is sent away and the courtiers, against their better judgment but cajoled by Katsuyori, decide to engage the enemy in battle.  It's a slaughter, and the thief, attempting to gain some kind of redemption, is himself struck down, his body carried off by the waters, unable to save the clan's banner.

I don't know if anyone else has commented on this, but Kagemusha may be a subtle critique of Japan's continuing struggle to deal with its World War II past.  I thought of this during the scene where the kagemusha is instructed to sit there in silence while the generals discuss strategy, only speaking when he is signaled to end the meeting.  When he gets an unexpected surprise when Katsuyori asks 'Shingen' (whom he knows is a fake) what to do, everyone is stunned.  The kagemusha manages to say something that sounds reasonable, then manages to dismiss the meeting.

I was reminded of how then-Emperor Hirohito was always presented in post-war Japan as a mere figurehead with no powers while his generals and ministers did the dirty work ranging from the Rape of Nanking to the Bataan Death March and all points in between.  The actual involvement Hirohito had in Japan's war direction is still a subject of fierce debate, but one that in Japan is all but verboten.  Is Kagemusha, with its story of war and the involvement of the courtiers with no input from its false head, a hidden allegory on the idea that maybe the head really didn't have any involvement whatsoever?  Could the head of government and head of state be both passive and active simultaneously?

Granted, this might be my own interpretation, but it did leave me wondering. 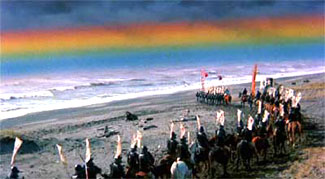 In other matters, Kagemusha still holds some truly beautiful visual moments that Kurosawa could create.  Some battle sequences appear to be precursors to Ran, and the dream sequence between Shingen and the double are both hypnotic and slightly deranged. The double's discovery of Shingen's body is shocking and so well-rendered.

Kurosawa also got strong performances out of his cast, though it is interesting that women do not feature much in Kagemusha apart from Shingen's mistresses, who are fooled thanks in part to the double not lying with them, only to them.

Nakadai does double duty as the proud Shingen and the slightly crazed and meek double, and he has some exquisite moments.  One such powerful moment is when he is instructed to wait and watch as his troops defend him as they go out to die.  He is impassive and weak, yet so many are dying for him, even those who know the whole thing is a sham.

Again, I go back to whether Kagemusha, with its tale of futile battle for something others knew was futile, was Kurosawa's opaque commentary on how, even after the Japanese leadership knew they could not win the Second World War, they kept fighting on for a lie.  And again, I may be the only one reading that interpretation, but I am happy that such a thought could be drawn from the film.

Again, at three hours Kagemusha may be too much for a casual film-viewer.  It may also put people off thanks to some of the more theatrical acting, even if it would stay within more traditional Japanese acting.  Apart from that, Kagemusha still has enough within it to make it a strong film, though I favor Ran as the late-Kurosawa masterwork.  I can see how films like Kagemusha might have influenced others like Kurosawa fanboy Martin Scorsese with Silence.

Kagemusha says much about the futility of maintaining myth, especially in war.  It also, oddly, made me think of all things, Moon Over Parador (unimportant person is forced to masquerade dead leader), so there's that.  Who knew Kurosawa's Kagemusha could potentially influence a comedy?