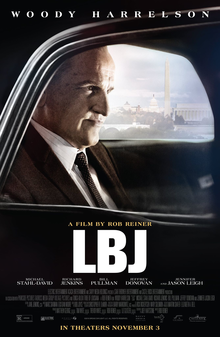 He was a Democrat.

LBJ covers the time shortly before and after the assassination of President John F. Kennedy (Jeffrey Donovan), where his frenemy, Vice President Lyndon Johnson (Woody Harrelson) tries to navigate uncertain waters.  On the one hand, he's got his real enemy, Attorney General/JFK's little brother Robert F. Kennedy (Michael Stahl-David), who despises Johnson, I suspect because he is not liberal enough for the more elegant and glamorous Kennedys.  On the other, he's got fellow Southerner Senator Richard 'Dick' Russell (Richard Jenkins) of Georgia, who sees Johnson as too liberal, what with his support of race-mixing an all.

Before 1960, Johnson was the powerful Majority Leader in the Senate, able to make laws by the force of his will, and with a contentious relationship with his fellow Texan Senator, Ralph Yarborough (Bill Pullman).

Ah, when once Texas was a solidly blue state that would never elect Republicans and where Democrats ruled without question.  How times have changed...yet I digress.

Johnson equivocates on running for President in 1960, wanting to jump in but fearing he will lose and thus, lose the public's love for him.  Sure, whatever.  He also sees how pretty JFK looks on TV, and how Bobby despises him to no end.  He mounts a halfhearted campaign at the convention, but he, the 'work horse' still loses to the more beautiful 'show horse' Kennedy.  Despite this, RFK is aghast and furious that JFK would go to LBJ behind RFK's back to be VP.

Bobby does his best to freeze Johnson out, dumping some Equal Employment Opportunity Commission on him and having Under-Secretaries attend.  Johnson trudges on, and suspects that all this is being done to clear the path for Bobby to run in 1968 as the main Democratic candidate rather than the Vice President.

Then comes Dallas, and everything changes.  LBJ now finds himself the President, even if Bobby still refuses to recognize or behave any better with the new Commander-in-Chief.  The Kennedy Court plots to undermine Johnson, while Johnson, now full of vim and vigor, seizes the mantle of JFK to push the Civil Rights bill into law, with no compromises or negotiations with people like Russell, who feel betrayed that 'one of their own' would have them give the 'Negroes' rights.  LBJ, however, rises to the occasion to achieve greatness.

While watching LBJ, I was reminded of a comment I heard about the making of another Presidential biopic.  20th Century Fox mogul Darryl F. Zanuck worshiped President Woodrow Wilson, so much so that he foisted a lengthy biopic of his boyhood hero on the public.  His biographer, when noting how Wilson was a flop, commented that there were many Presidents whose life stories would be fascinating.

"But WILSON?!", he said, almost shocked that our most bookish, schoolmarm racist Commander-in-Chief would be considered the stuff of exciting cinema.

I suppose one can make a good film about Lyndon Johnson, but LBJ isn't.  The reasons for it are many.

LBJ is squarely in the 'worshipful' mode, a film that has no interest in exploring any dark aspects of this person's volcanic personality or bullying manner.  It literally makes Vietnam a footnote, mentioning it briefly at the end, and apparently only to note that he was the last sitting President not to run for reelection.

I am going to throw in a little political speculation here, but I imagine LBJ is a somewhat romantic take on Johnson because this is what liberals would like to remember Johnson for.  They would love to hold onto the vision of Johnson as the architect of The Great Society, where the government's sole purpose for being was to provide financially to and for all.

If it means tearing down some of the Kennedy mystique to build up our somewhat-humble hero, so be it.  LBJ is the first film that I can remember where the Kennedys were shown in a bad light, at least when it came to matters outside the bedroom.  JFK was shown as vacillating, unsure about what to do or how far to push.  RFK was shown as perpetually angry, spiteful and hateful towards our subject, who from what I drew from LBJ just wanted to be loved. 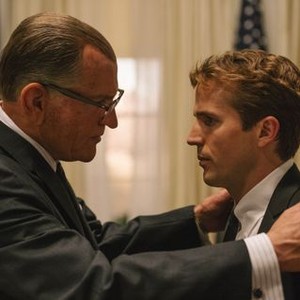 Now, as a digression, I'd like to talk about one aspect of the performances that the actors could not help.  The real Johnson was a towering 6'4", who used his height to cajole others.  The real Bobby Kennedy was a mere 5'9", making him over a half foot shorter.  In LBJ, Johnson looks like he's barely an inch taller than Bobby Kennedy if that.  If IMDB is to be believed, Harrelson is 5'9 1/2" and Stahl-David is 5'10".  I personally doubt those are their actual heights but that's neither here nor there.

The height disparity between the actors and the real-life figures makes it less a war between the imposing Johnson and the smaller RFK and more like people equally matched.  While this adds to the perception LBJ wants to leave on the viewer of Johnson as a good man much put upon, it lessens the bitter war between them.

Johnson, I figure, was meant to be highly sympathetic, but you never get the sense in LBJ that he was a force to be reckoned with.

Woody Harrelson was miscast as Lyndon Johnson, and it was not due to his height.  Even though both of them are Texan, Harrelson neither looks or sounds like Johnson.  The looking part was not entirely Harrelson's fault: he was loaded with some really freakish makeup that gives J. Edgar a run for its money in awful.  The sound part, however, was: Harrelson's higher, softer tones can't convince people that he was this blustery, bullying figure.  Pullman's Senator Yarborough came across as less a 'man of principle' and more a dithering figure, one with a nice smile but nothing else to recommend him as anything close to a rival.

Jennifer Jason Leigh as Lady Bird did well in a small part, even if she on occasion did look like she had wandered off a biopic of The Wicked Witch of the West instead of the First Lady.

Better performances were given by Jenkins as our sincerely racist Senator and especially Stahl-David as Bobby, the fiery id to JFK's ego, though Donovan neither looked or sounded like President Kennedy.

Director Rob Reiner and screenwriter Joey Hartstone made one bad choice after another, from the 'stirring' music with its soft trumpets to echo the greatness of LBJ to a long monologue where Johnson was calling for his staff to give his cook her rights.  That whole sequence screamed 'OSCAR CLIP!" and it is so naked a plea for award recognition that it borders of farce.

More than anything, LBJ is quite curious in how soft it is with the subject.  He is shown as almost meek, more needy of love than a powerful and power-craving individual.  He worries about whether his daughters love him and listens to Lady Bird's words soft and tender, which might have made the real LBJ burst out howling with laughter or enraged.  I'm sure he loved his wife and daughters, but this man had no problem being vulgar and uncaring, cheating on Lady Bird and using racial epithets.  Portraying LBJ as this almost endearing figure in this sympathetic portrait would not have been to his liking.

He probably would have enjoyed the scene where he mocks Bobby's Massachusetts accent at him, as well as being seen as the wiser, stronger and better leader than either Kennedy Brother.  Apart from that, LBJ is simply too laudatory to give a genuine insight into this most complex and contradictory figures.