I'm going to give you a scenario for a movie: a progressive college professor is thrust into the White House by universal acclaim (and deep divisions within the opposition party).  This leader is noble, is pure, is beloved, almost worshipped by all mankind, untouched by corrupt forces.  Far above all mankind in wisdom and foresight, he stands up to these nefarious evildoers, for he is somehow above politics.  This leader also knows the high cost of war and how we must avoid it at all cost, and would go on to win the Nobel Peace Prize, and though he would not be appreciated within his lifetime, today his Presidency is ranked with that of Washington or Lincoln.

Minus the death of the First Lady, Wilson plays like a dress rehearsal for the Barack Obama Story (which I understand will be called King of Kings Part II: Grandson of God).

I note the sharp irony that in real life, Woodrow Wilson would not only have hated this particular successor (because Wilson was an out-and-out racist who went out of his way to bring segregation at all levels of government), but would have been disgusted that anyone would have spoken that 'mulatto's' name in the same breath with his.  I do hope that when the official portrait of President Obama is placed in the White House, it faces that of President Wilson, as a perfect irritant to the memory of the man who thought Birth of a Nation was a documentary.  Wilson, the hagiography of the 23rd President, does not justify its massive length. It also does something deadly to any biopic: it goes from being a chronicle of a man's life to being a lavish love letter to its subject.  Wilson doesn't dive into the man's psyche so much as give us a shockingly glossy portrayal, one where it all comes off in turns dull and laughable.

We start in 1919, when Woodrow Wilson (Alexander Knox) is indeed President...of Princeton University.  The Democratic Party calls on him to run for Governor of New Jersey, and like Cincinnatus, he goes forth to save the state.  "You believe in the principles of democratic equality, the abolition of any special privileged class", his wife Ellen (Ruth Nelson) tells him.  Now, the Jersey Dems thought Wilson would 'play ball', but he shocks them by being as honest as Caesar's wife.   He is beholden to NO man!  His time as New Jersey Governor puts him in contention for the Democratic Party nomination for President, and while he does not campaign for the nomination (being too noble), his underlings are more than happy to do it for him.

Well, a divided Republican Party allows Wilson to sweep into office, where he brings peace and love and greatness to all mankind.  Thanks to him, we have the Federal Reserve, Anti-Trust legislation, Federal Trade Commission, an eight-hour workday, and sunshine on Sundays. 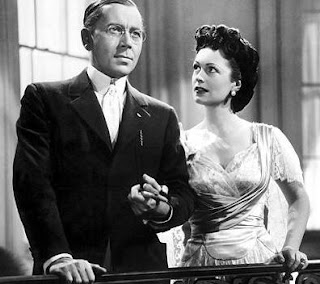 However, there is crisis both external and internal.  The world is falling apart just at the same time Ellen is dying, and the burdens are becoming greater and greater.  Still, he must go on, and so must his efforts to keep us out of war.  He knows the high cost of war (especially since the side he favored in the American Civil War lost).   However, when war comes, he must lead the nation to victory.  After victory though, those evil Republicans, headed by Senator Henry Cabot Lodge (Sir Cedric Hardwicke) will not give the world peace through the League of Nations.  Being always right, Wilson will not compromise and embarks on a cross-country tour.  In the middle of all this, though, comes more tragedy.  The President suffers a major stroke, and the new First Lady, Edith Bolling Galt Wilson (Geraldine Fitzgerald) does her best to ensure that the gravity of the President's condition be kept as closely a guarded secret as possible.

Though paralyzed he cannot resign...it would paralyze the WORLD!

Despite his best efforts to make the world safe for democracy, his party is voted out thanks to his stubbornness about the League.  Wilson leaves office, sad but not bitter about all this, knowing he will rank among the greats, like his hero, Abraham Lincoln.

I remember watching a documentary about Wilson's producer, Darryl F. Zanuck.  When discussing Wilson, the interviewee marveled at how Zanuck, as shrewd a producer as anyone in Hollywood, would have thought Woodrow Wilson would make for an interesting subject, let alone a brilliant movie.  Abraham Lincoln, yes, he said, but WILSON?  It should be remembered that President Wilson was a hero to Zanuck, and thus he would of course imagine the whole world would see Woodrow Wilson the same way Wilson sees Wilson (and I imagine, how Woodrow Wilson saw Woodrow Wilson). The great problem with Wilson today is that the film is far too laudatory, making the President such a saintly, holy figure one is surprised that he didn't just walk across the Atlantic to go to Paris rather than waste time by taking a ship to get there.  There are scenes, dialogues, and scenarios that are beyond historically inaccurate and just downright laughable.

Woodrow Wilson was a racist, plain and simple.  He still harbored animosity towards the North as a Southerner, so why would he think so highly of President Lincoln.  The idea that someone who enforced strict segregation in Washington, D.C. when prior to him, blacks and whites could work together somehow "believed in the principles of democratic equality" is insane and asinine.  He no more believed in 'democratic equality' than he believed in monarchy.  A little part of me suspects that if he could, President Wilson would have revoked the Emancipation Proclamation.

Another rather far-fetched scene is when he secretly serves coffee and donuts to troops of various nationalities.  The idea that Wilson would be so welcoming of all races is rubbish.

Wilson makes no mention of the department of propaganda he set up to promote the war, or how he locked up those who opposed the war, like Socialist Presidential candidate Eugene Debs.   Maybe those scenes were deleted.

Wilson, if one looks at it today, just seems so enamored of its subject that the film becomes this Profile for Sainthood for good old Woody, too busy building him up to be this Titan For All Ages that the few times we see Wilson the man they almost ring hollow.   Alfred Newman's score announces WILSON WAS A GREAT MAN, and the opening title cards are a howler:


Sometimes the life of a man mirrors the life of a nation.  The destiny of our country was crystallized in the life and times of Washington and Lincoln...and perhaps, too, in the life of another President...This is a story of America and the story of a man...Woodrow Wilson, 28th President of the United States...

Talk about laying it on a bit thick!  That is a direct quote, and it shows just how Wilson flops as history, for it is stubbornly determined to show Woodrow Wilson as something beyond a mere mortal and into an almost divine figure.

As a film, Wilson also fails because Henry King's direction has almost everyone behaving so stiff and formal, as if they know they are caught up in 'great moments of history'.  There are a few good moments (Knox's scene with Ruth Ford as his daughter Margaret when he remembers his late wife was good), and Thomas Mitchell's lackey was a breath of fresh air to the rather profound nature the Wilsons lived in (though I wondered why he always called him "Governor" even when Wilson got to the White House).  Knox wasn't bad as the President, just so righteous all the time as Wilson that I would have volunteered to serve the Kaiser if it meant getting rid of this moralistic figure.

It is only when Wilson's growing stubbornness on the League makes him ever-so-slightly unsympathetic that Wilson managed to get some air into its grandiose ideas about the subject.  By this time the nearly two-and-a-half hour snoozefest has all but either wiped us out or had us cheer on the Republicans.

Wilson is a wasted opportunity because it insists we all love, admire, even worship the subject of the film.  It hides the negative aspects of Wilson's character and Presidency (the muzzling of dissent, the overt bigotry) to give us a very whitewashed idea of who this man was.  However, given how Woodrow Wilson loved all things white...