My Father, My Frat Brother...

There is an unexpected benefit of going back to Season One of Franklin & Bash is that it gives me a chance to find out what has happened to characters from the past.  With Falcon's Nest, we revisit Danny Dubois, aka Double D, an old friend of Peter Bash and His Royal Highness Elmo, Duke of Landingshire.

Double D first appeared in Season One's Bro-Bono, which is the last Season One episode of Franklin & Bash I've reviewed.  Here, he makes a return appearance, older, wiser, and more mature: three things the leads are not.  Falcon's Nest is a very interesting example of what can happen when a former dimwit with no prospects grows up while current dimwits with tons of cash will not.  In many ways, the contrast between Double D and HRH and Peter Bash are so sad in so many ways.

The last time we saw Double D, he was living at this grandmother's retirement home, where he found a place in this world of retirees.  However, now with his grandmother dead Danny has to vacate the retirement home where he is genuinely liked and where he has found a sense of purpose.  Stu Weston (Armin Shimerman), the tyrannical head of the Casa Del Palms Retirement Homes' board, wants Danny out.  It doesn't matter that the residents love him and are pretty much willing to give him an exception to the age requirement.  With that, Double D turns to Peter and HRH for help.  There appears to be a way out.  The reason Double D was allowed to stay was because his grandmother lived there, and so long as she was around he was permitted to stay.  Therefore, why not get Grannie's last boyfriend, a resident who calls himself Falcon (Barry Bostwick) to adopt him as his son?  Never mind that Daniel James Dubois is 36 and Falcon is 76.

It seems a stretch, and Falcon's drunken behavior (compared to the wildly mature Danny) doesn't help.  What then?  Well, our boys, being the legal minds that they are, decide on a new strategy: get DANNY to adopt Falcon!  Being Franklin & Bash, you can guess where this went. 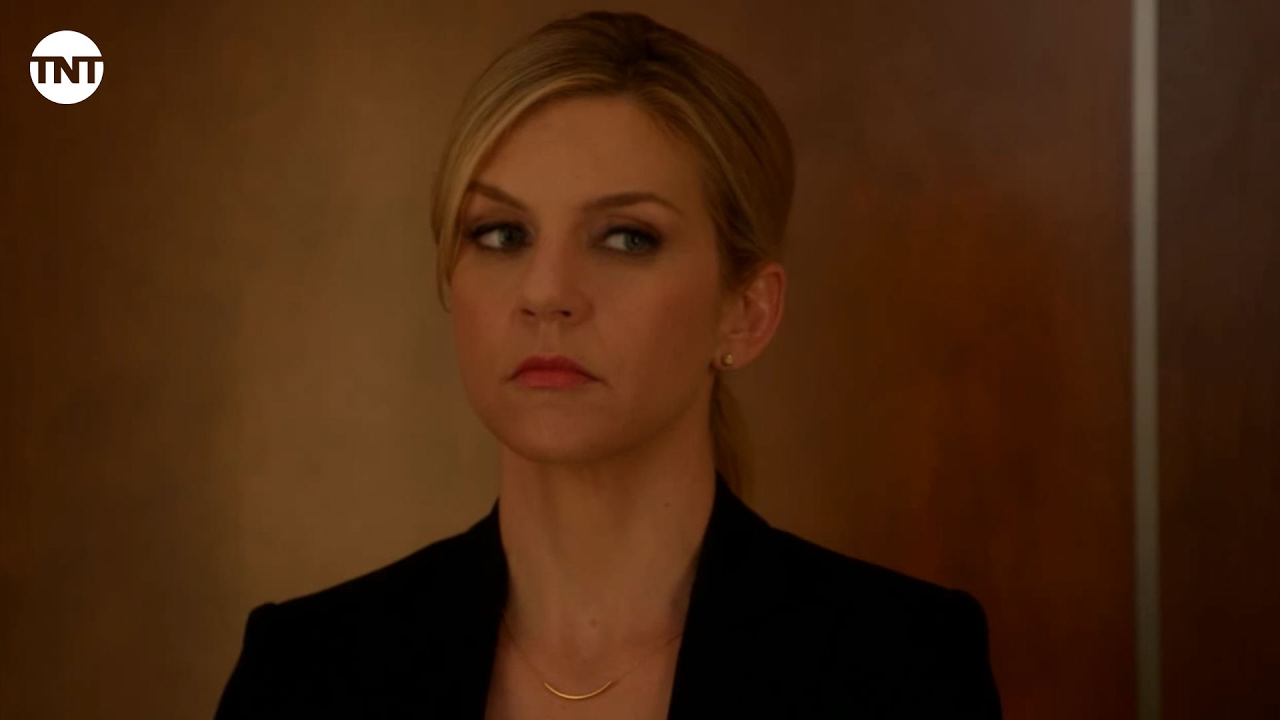 In the subplot, HRH is still struggling with his relationship with Ellen Swatello (Rhea Seehorn), going so far as to blame HER for him sleeping with his best friend's mom because she broke up with him.  Swatello though, is having bigger problems than Elmo Franklin (if you want to think of that as a Breckin Meyer short joke, have at it--I'm frankly beyond caring now).  The firm's mercurial head, Stanton Infeld (Malcolm McDowell) sees nothing strange in giving a corporate lawsuit to virtually untested Anita Haskins (Toni Trucks) rather than the ex-ADA Swatello (who bristles at the idea of being second chair to someone with almost zero courtroom experience).  Pulling rank, Damien Karp (Reed Diamond), who is attracted to Anita, opts to join Anita's case...as First Chair, of course.

This lawsuit involves GoWest Airlines, which cancelled a flight that caused scientist Erica Boyd (Erica Birdsong) to miss a major conference that would have awarded her millions in grant funds that was virtually in the bag.  Anita has a secret agenda in going against GoWest, which is clouding her judgment in the eyes of Karp.  Anita balks at the settlement Damien worked out, telling him that for all their faults, HRH and Peter go to the mat for their clients.  However, Anita also calls out HRH and Peter, telling them that Karp is actually a good guy and extremely capable lawyer and are far too dismissive of Damien as both an attorney and a person.

Well, in order to win that case, Damien actually adopts a somewhat F&B method: asking that since the cancellation was due to 'an act of God', they should be allowed to call God Himself to the stand.  They settle for Ted (Matt Doherty), a GoWest technician whose report caused the airplane malfunction to be called 'an act of God'.  Well, they win that case too and Karp finds why Anita harbored this hostility: she missed the Red Wedding on Game of Thrones due to a similar GoWest cancellation, which in turn caused her to break up with her fiancée when he told her all that happened on that episode. 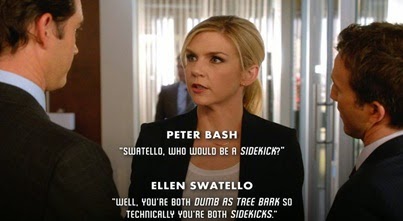 Now, I'm going to say that Falcon's Nest did have at least one amusing bit: the question as to which one of our two dimwitted himbos with law degrees was the 'sidekick'.   Apart from the idiocy of the argument itself hearing them referred to as "Yogi & Boo-Boo" (Karp), "Sherman & Mr. Peabody" (the judge in the adoption case), and "Wallace & Gromit" (Karp again) seems pretty accurate as to the intelligence level of both HRH Elmo, Duke of Landingshire and Peter Bash.   There is something again sad about two men who tell the retirement board that in a mental age test, both of them tested at 13...collectively.  Danny's score was in the 60s age group.

That, however, was not how I would have described Falcon, and a little part of me thought Barry Bostwick could do better than his drunk, disheveled loon, a guy who describes himself as a Golden Girls God.   I figure he played the part well, but somehow, I couldn't help think that with Falcon, we were looking into HRH and Peter's future (especially since neither appears willing to move away from the other in a relationship I think has grown toxic).   I'm not going to argue against the adult adoption idea because it doesn't seem too far-fetched.  Having Danny adopt Falcon though...

In any case, there were things to enjoy in Falcon's Nest, such as the interaction of Trucks and Diamond as they continue their odd dance, and seeing Jenny O'Hara as the octogenarian ex-hooker Nanette is always fun (though sadly, I thought THIS should have been the episode Pindar said goodbye...even if seeing Kumail Ninjiani in bed with O'Hara would have scarred everyone for life).  I also thought Michael Weaver's Danny was a much better and stronger performance than last time, and I think he just deserves better than what he was given.  Seehorn similarly kept the stiff Swatello we've come to actually admire as one of the few sane people in this madhouse, but also brought a little softness when she realized that when Anita was asking her advise about someone being attracted to someone else at the law firm, she wasn't referring to Ellen Swatello herself.

If it weren't for those other factors (like Infeld so brazenly dismissing Swatello, or relying too much on Danny's maturity to bail them out), Falcon's Nest could have risen higher.  Truth be told, in retrospect Falcon's Nest might actually be the best Franklin & Bash of the season if you think an average Franklin & Bash episode should be based around idiocy.  It's harmless, dumb, and this might be the first time I think I was too harsh with a show that has just sunk.

For the moment, I'm holding to my decision, but who knows...I may yet adopt a different idea.

Next Episode: Spirits in the Material World