Whether because it was too obvious or because Franklin & Bash really has no ideas, it is surprising at the very least that you could have Ernie Hudson (one of the stars of Ghostbusters, or as Sophia Petrillo referred to him, the black guy they couldn't give a funny line to) in a ghost-centered Franklin & Bash episode and have him do nothing.  Spirits in the Material World tries to bring back some of the old F&B wackiness, but by now the schtick has gotten old.

Oh look...Peter Bash is AFRAID of ghosts.   How original!

Again the concept of making Peter the patsy makes me wonder whether Breckin Meyer has it in his contract that HE cannot be the one made to look like the idiot but rather be the one who mocks his taller and better-looking partner (read into that whatever you wish).   I think thorough laziness has set in on Franklin & Bash because not only have we seen all this before, but Peter's phasmophobia has no basis whatsoever.  It's just introduced to give Mark-Paul Gosselaar something to do.

Peter Bash (Gosselaar) and HRH Elmo, Duke of Landingshire (Meyer) take the case of the Parkers (Brian McNamara and Ryan Michelle Bathe).  They bought a property from Freddie Silmas (Lola Glaudini) in the hopes of turning it into a bed-and-breakfast (a bed-and-breakfast in Los Angeles...OK).  However, they find that it's haunted, and they want their money back.  No surprise, Peter is afraid of ghosts, so afraid he does not want to take the case because it might require him to enter the haunted house.  It gets so bad that HRH has to slap him.  Peter agrees to take the case but on condition he does not have to set foot inside the house.

And again, how old IS Peter Bash?

They get help from Danny Mundy (Anthony Ordonez), who contacts a PIG (Paranormal Investigative Group) to locate spooks in the house.  PIG Lisa (Ava Gaudet), to whom Danny is sexually attracted, does find something, but her evidence is excluded thanks to F&B's former intern Bonnie Apell (Danielle Panamaker), who convinces the judge that ghosts are not real.  They boys don't help their case when they basically show off how stupid they are (more on that later).

Well, with that it looks like they might be without a ghost of a chance of winning, but thanks to a little investigative work by Danny, a helpful journal in Gypsy Romani, which of course can be read by Stanton Infeld (Malcolm McDowell), and a convenient witness who was once dead but now very much alive (if perhaps not mentally there) they win their case and even get a little love from The Chive, a website that caters to men like Peter and HRH.  Unfortunately, THEY don't win "Hottest Lawyer of the Year".

The winner is another IDFB attorney, Anita Haskins (Toni Trucks).  She makes up the subplot, and it involves her relationships with both Damien Karp (Reed Diamond) and Cheryl Koch (Jaime Ray Newman) her old moot court frenemy.

It seems that Anita and Cheryl had a falling out over the use of information that allowed Cheryl to win her moot court case against her former friend Anita, and the latter has never forgiven her for this.  This is the primary reason Anita did not want to go to her moot court reunion (and I confess, I never knew there was such a thing as a 'moot court reunion').  In any case, tempers (aided by booze) flare again, and after Anita lays the smack down they agree to a redo to see who would win.  This gives Karp the opportunity to be a judge (his lifelong dream) and he makes the most of it, appearing at this moot court wearing a complete judge's robe.

This, I might point out, is about the only really funny or clever bit in Spirits in the Material World because it allows us to be laugh with and at someone as stuffy as Damien Karp.   As it turns out, there is somewhat of a reconciliation, which is good for Anita because in their hypothetical case (Is friendship a privileged status in the same way a doctor/patient or husband/wife privilege exists?) Damien tells her he and the dean would have ruled against her.

All this comes together at the victory party in the haunted mansion, where Chives co-founder John Rezig (making a cameo as himself) finds the boys are to his liking and Anita is indeed the hottest lawyer thanks to her fellow moot court classmates uploading her verbal bitch-slap online.  HRH may have found a new Duchess in Bonnie, who isn't too upset about losing given a.) she didn't like Silmas and b.) finds the diminutive Duke cute.  Danny himself gets lucky with a PIG, while we find that indeed, there WAS something in the house...

I think by now we find that Franklin & Bash is perhaps due for retirement.  This comes to me thanks to a variety of factors.  Chief among them is in how the show is absolutely determined to make Peter and HRH complete morons yet brilliant attorneys simultaneously.

When they go to the judge to argue to let Lisa testify, they dismiss the arguments Bonnie makes about the credibility of ghosts.

"That's what they said about gravity, Your Honor, until Galileo got hit in the head with an apple," said HRH.  "Louis Pasteur would have been stoned to death for inventing milk," added the scaredy-cat Peter in as serious a tone as Gosselaar could muster without throwing Patrick Sheehan and Bill Chais' script in their faces as damaging to his career.

For once the judge seemed genuinely astonished at the pair's stupidity.  "There's so much wrong with that I don't even know where to begin," Hudson's Judge Perry tells them.

Yes, we're suppose to believe HRH and Bash are himbos with law degrees, but how could someone who knows of Louis Pasteur genuinely believe Pasteur invented milk?  Again, Gosselaar's delivery of this line showed that either Peter Bash KNEW what he was saying was idiocy (which is wrong in so many ways) or Gosselaar himself by now has given up on the show, realizing that no matter what he'll always end up having to play second banana to Breckin Meyer.

While we're on the subject of logic (something Franklin & Bash lost contact with three seasons ago), the whole case seems idiotic to the extreme.  Cloris Leachman is Irina Kruskal, the former owner of the hotel in question who sold it to Silmas and told her about the truth of what went on in the house (information Silmas withheld from the Parkers).  The story strongly suggests Irina is dead, but to perhaps no one's surprise she manages to pop up because, well, why not?

Going by the logic Spirits in the Material World gave us, Irina was spirited away on a world cruise by Silmas to keep her from testifying about the truth of the hotel's history.  Then who was it that was causing the damage to the Parker's investment (such as repainting the walls they had worked on the night previous)?  A more logical conclusion would have been that Silmas herself, who had a key, was infiltrating the hotel and causing mayhem to bring the Parkers to financial ruin (and get the hotel back for a song, which she could resell).  However, if I understand the situation, Irina was the one living in the hotel without the Parkers knowing, and if she was the one making mischief we're in a mess of a story.

Given how generally whacked out Irina was (which is a late-Leachman forte), how this apparently three thousand year old woman could work so hard and so fast is well, not something we need worry about.

Then there is the extremely convenient "Crazy Infeld can read Romani", because, well, it's cheaper than hiring someone who can, and, why not...Infeld is a perfect excuse for anything truly bizarre. 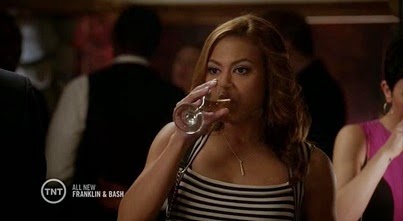 Then there is the remarkably lazy way Spirits in the Material World sets things up.  We get all the clichés: the haunted hotel, the finding of a witness swinging a meat cleaver (right down to the music and moody cinematography).  It isn't as if I don't realize what they are going for, but do they have to be so obvious?

Furthermore, what is IT with this show using the more physically appealing Gosselaar as the whipping boy for every situation?  Since when is he afraid of ghosts?  It wasn't as if his weight hasn't been mocked, or his mother's profession of a sex surrogate, or he's been punched or tasered before.  I'm by now really tired of Peter being the go-to guy for humiliation.  Maybe Gosselaar likes it this way, but for once I'd like Breckin Meyer to be made the fool in some way.

As for the Chive cross-promotion, I am not going to bash it simply because until Spirits in the Material World I had never heard of the Chive and really don't care to be a 'chiver' (thanks, Wikipedia: Fount of All Knowledge).  I think some people were put off that the episode became a virtual ad for the website, but for me, it was neither one way or the other.

About the only thing that kind of worked was the subplot, not because it was particularly great (the old 'people don't grow up and behave the same way as adults as they did when they were ten to twenty years younger).  Instead, it was because it gave Diamond a chance to lighten up, and showed Trucks could handle comedy.  However, I agree with Damien: I would have ruled against Anita because her arguments (that friendship does come under a protected class) never convinced me and Cheryl's case for the negative were more real.

I get that Spirits in the Material World is meant to be light and not taken all that seriously.  However, when your leads are suggesting Louis Pasteur invented milk or never give a real answer as to who was causing the mischief at the Overlook...I mean, Heathbrooke Hotel, you can't suspend disbelief for that long.

And really, you got one of the stars of Ghostbusters and you STILL can't give him one funny line?

Next Episode: Red or Black
Posted by Rick at 8:21 PM