The Balloonman is the first Gotham episode that I felt brought together the police procedural we have and the Batman story we are leading up to in a perfectly balanced way.  This is due to having two stories going on simultaneously: the investigation of crimes that are pretty bizarre (fitting in this comic book-based world) and the slow rise of a prime Batman villain, The Penguin.  It also helps that nearly everyone's performances in The Balloonman are top-notch, with two or three standing out in a sea of altogether strong performances.

Gotham has a mysterious avenging angel.  He finds disreputable members of society (an embezzler, a dirty cop, a very dirty cardinal) and executes them by latching them onto a weather balloon and have them float up into the air.  As we know, what goes up...

Put on the case is Detective James Gordon (Ben McKenzie) and Harvey Bullock (Donal Logue).  Bullock is generally unconcerned that these figures are going up, up, and away, but Gordon, being Gordon, believes no one can take the law into their own hands.  As they continue to investigate, a clue finds that the case is tied to Gordon via the caseworker for Selina Kyle (Camren Bicondova), who now has both provided information about the Wayne murders and managed to run off. Meanwhile, Oswald Cobblepot (Robin Lord Taylor) has slithered back to Gotham, taking the first steps to become a master criminal.  He finds the grime and corruption of the city beautiful.  With his mind still on revenge against Fish Mooney (Jada Pinkett Smith), he gets a job at the restaurant of Sal Maroni (David Zayas), the rival to Mooney's patron Falcone (John Doman).   Mooney, even if she were aware of Cobblepot's return, is too concerned with striking at Falcone, which involves having his girl go through an off-screen 'accident' and even getting rid of her faithful and loyal lover, Lazlo (Michelangelo Milano).  Gotham is coming closer to a crime war, but there are other players that have yet to make their presence known.

Meanwhile, Barbara Kean (Erin Richards), whose drug and lesbian history is slowly being revealed to us (but not Gordon) keeps having doubts about James placed by her former lover, Renee Montoya (Victoria Cartagena), who thinks Gordon is dirty.  She is convinced Gordon killed Cobblepot on Falcone's orders, so when Oswald shows up at Barbara and James' flat, it comes as a shock to both of them (and imagine if Montoya knew about this).

In all of this, young Master Bruce Wayne (David Mazouz), becoming obsessed with the investigation of his parent's death and the actions of the now-captured Balloonman, he wonders whether someone may be willing to break the law in order to save it.  Who will defend the people of Gotham, a reporter asks, now that the vigilante Balloonman has been taken.  Young Bruce ponders such a query...

The Balloonman works so well because of three things: story, visuals, and performances.  In regards to the first, we see that the cases Bullock and Gordon are getting are not tied to the general Batman mythos.  They may be as I am not well-versed enough to know every detail of it.  However, the crimes of the Balloonman are bizarre enough to take place in this comic book-based world and yet be grounded (no pun intended) in that world's reality.  The actual revelation of the Balloonman was both logical in terms of investigative work (albeit with a touch too happy coincidence) and plausible. 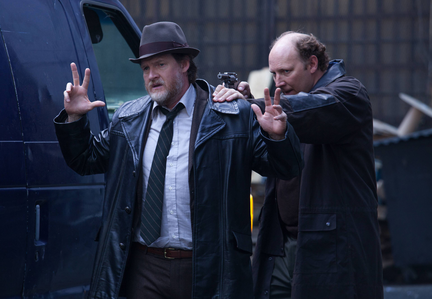 The Balloonman himself is in some ways a more twisted version of Gordon.  James Gordon is someone who will fight to protect all, both guilty and innocent.  The Balloonman has similar goals, but he has decided to work outside the law to enact justice on those the law is unable to touch.  Despite the call for him to do the same, James Gordon is not prepared to slip into the darkness of justice.  Bullock, for his part, has no problem giving the Balloonman a taste of his own medicine, but while the shady Bullock and the moral Gordon have reached détente with their worldviews and are forming a solid team, Gordon will not slip into Bullock's darkness either.  Throwing himself onto a floating Balloonman, it is now Bullock who is faced with a moral dilemma: let the scum go up with his partner or bring both of them down to safety.

Seeing the interaction between Logue (whom I'm starting to like as Bullock) and McKenzie (whom I'm also liking and identifying with) is one of the great treats of Gotham.  They even bring a touch of comedy, as when an irate Gordon asks what information Bullock got from a hotdog vendor.  None, Harvey replies.  He just wanted a hotdog.  Seeing Gordon save Bullock from having a large woman almost smash his head in with a television screen is tense.  Seeing Bullock punch said woman out is funny in a very creepy way.

Still, I'm getting ahead of myself.  The storylines of the Balloonman and Penguin's rise are balance with neither overwhelming the other.  We also continue to keep getting simply amazing visuals in Gotham, from the shocking rise and fall of Gotham's best and brightest to when Jimmy the balloon company head whose balloons were stolen.  Gotham has captured the noir atmosphere of a city crumbling all around us so well, again...Outstanding Cinematography Emmy consideration here.

It's a longer shot given how snobbish and at times idiotic the Television Academy can be, but there would be no justice if Robin Lord Taylor isn't already showing up on potential Outstanding Supporting Actor in a Drama Series lists for his pitch-perfect performance as Oswald Cobblepot.  Taylor shows Cobblepot to seemingly be weak, almost frightened (as when a low-level thug for Mooney recognizes him and is dragging him off to her club) to completely turn it around and show Cobblepot to be a dangerous and deadly enemy.  Very same scene, Cobblepot seems to gather his senses and violently kills this thug off.  Being network television there is only so much they can show, but the visuals and what we ARE shown are enough to leave their impression.  When Cobblepot is told he doesn't have the right kind of shoes to work at Maroni's restaurant, Oswald sees someone who does, and instantly we see the wheels turning.

In turns chilling and almost sympathetic, RLT is slowly creating what I think may be the most iconic interpretation of The Penguin.  As he once was in awe of Danny DeVito's Penguin in Batman Returns, so many Gotham viewers will be in awe of Robin Lord Taylor's Penguin.

Pinkett Smith continues to have fun as the deliciously evil Fish Mooney, and while she had a small role Bicondova does great work as Selina.  However, for me the second standout (RLT being the first) is David Mazouz as Bruce Wayne.  Again, his role is small (understandably), but he so commands the screen with that mix of despair and innocence.  While watching the television report on the Balloonman, we can see that Master Bruce is pondering seriously who can be in a position to save Gotham from itself.  All the ideas of who Bruce Wayne will grow up to be appear to be entering his mind, and Mazouz continues to rise and rise in his interpretation.

The Balloonman manages to tell two stories well, has strong visual elements, and really strong performances all around (Taylor and Mazouz being my favorites and I believe the strongest).  I'm so pleased that Gotham is finding its rhythm and that if it keeps producing episodes like The Balloonman, it will not only be a hit but will be a great addition to the Batman Canon.

Next Episode: Arkham
Posted by Rick at 12:00 AM