The Crucifer of Blood: A Review 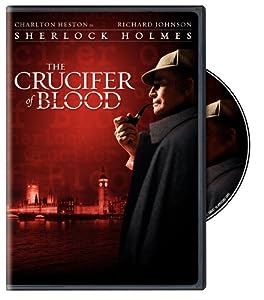 THE CRUCIFER OF BLOOD

The television film adaptation of The Crucifer of Blood is a curious addition to Sherlock Holmes-based productions.  It stars American acting legend Charlton Heston in the role of the very British Sherlock Holmes, one where he recreates his Los Angeles theatrical performance.  On the whole I think Crucifer of Blood is entertaining if one thinks of it as a theatrical adaptation, where the stage origins are clearly visible.

A loose adaptation of The Sign of Four, we start with an extended flashback to India, where Private Jonathan Small (Clive Wood) falls into possession of a maharajah's treasure during the Indian Mutiny at the Red Fort of Agra.  Two British officers, Colonel Alistair Cross (Edward Fox) and Captain Neville St. Claire (John Castle) find Small with this treasure, where the two natives aiding in guarding that particular gate are killed, one by St. Claire, one by his own hand.  The suicide believes he is now cursed, and that this curse will continue.  As insurance, Small has Cross and St. Claire sign a blood oath to share the treasure.

Thirty years have passed, and St. Claire's daughter Irene (Susannah Harker) has come to London to ask for help from Sherlock Holmes (Heston) and Dr. Watson (Richard Johnson) to help her father.  The Captain has become an opium addict, and appears haunted by both a strange curse and the death of her mother, which she believes her father caused.  Holmes and Watson go to Colonel Cross' massive estate, where we discover St. Claire is hiding, terrified of the treasure Cross has been hoarding (and which St. Claire has sold his rights to in exchange for a smaller pension).  However, in the dark and stormy night Cross is murdered almost right under Holmes and Watson's nose.

With one of the military men dead and the other terrified, it is a search to find St. Claire.  He is found in an opium den, where the Chinese owner Fu Tching is none other than Sherlock Holmes (passing himself off for the real Fu Tching, who owes him a favor).  However, Small manages to strike again, as St. Claire is poisoned like Cross was.  The search is now on for Birdy Johnson (James Coyle), Cross' manservant who has run off.  Birdy does go to 221 B Baker Street while Holmes, Watson (who has fallen in love with Irene) and Inspector Lestrade (Simon Callow) have gone off chasing after Small.  Birdy comes to find Irene, and we get one or two more twists which Holmes has managed to put together. As I finished Crucifer of Blood, I admit I was entertained by it, although I can see why many Holmesians (as Sherlockians now is almost exclusively reserved for fans/lunatics of the BBC's Sherlock television series) find great flaws within it.  The biggest issue involves Charlton Heston himself.  It isn't that Heston is a bad actor.  It's in the fact that he never bothers to attempt a British accent.  Heston sounds thoroughly American, which puts him at odds with all the other actors (who are British).  Furthermore, near the end we see Heston slip into the more theatrical mannerism that Heston at the latter stage of his career adopted.  When he begs Watson to stay rather than leave his services, it was delivered as dialogue, not as a plea to his friend.

Finally, there's the age issue.  Heston appears a bit too old for the character.  This isn't a deal-breaker per se but it does make the forced romance between Johnson's Watson and Harker's Irene look bizarre at the very least.  Johnson looks like he's romancing his daughter to granddaughter (or at least her friend).  To their credit everyone does what they can to make it believable, but it does look a little bit curious.

Another aspect that Crucifer of Blood has against it is the deliberate play structure the film has.  Director/writer Fraser Heston (adapting the Paul Giovanni play) takes a few good steps visually (such as the extended flashback and St. Claire's drug-induced hallucinations in sepia) but the film is filmed in such a way that at times it does appear that it is basically a filmed play.  The titles on the screen almost read like a playbill (a scene opens with "An Hour Later" on the screen), and the film doesn't take advantage of opening up the play.  In many ways, Crucifer of Blood has the stage dressings and structure of a television movie with some aspirations, which was exactly what it was. 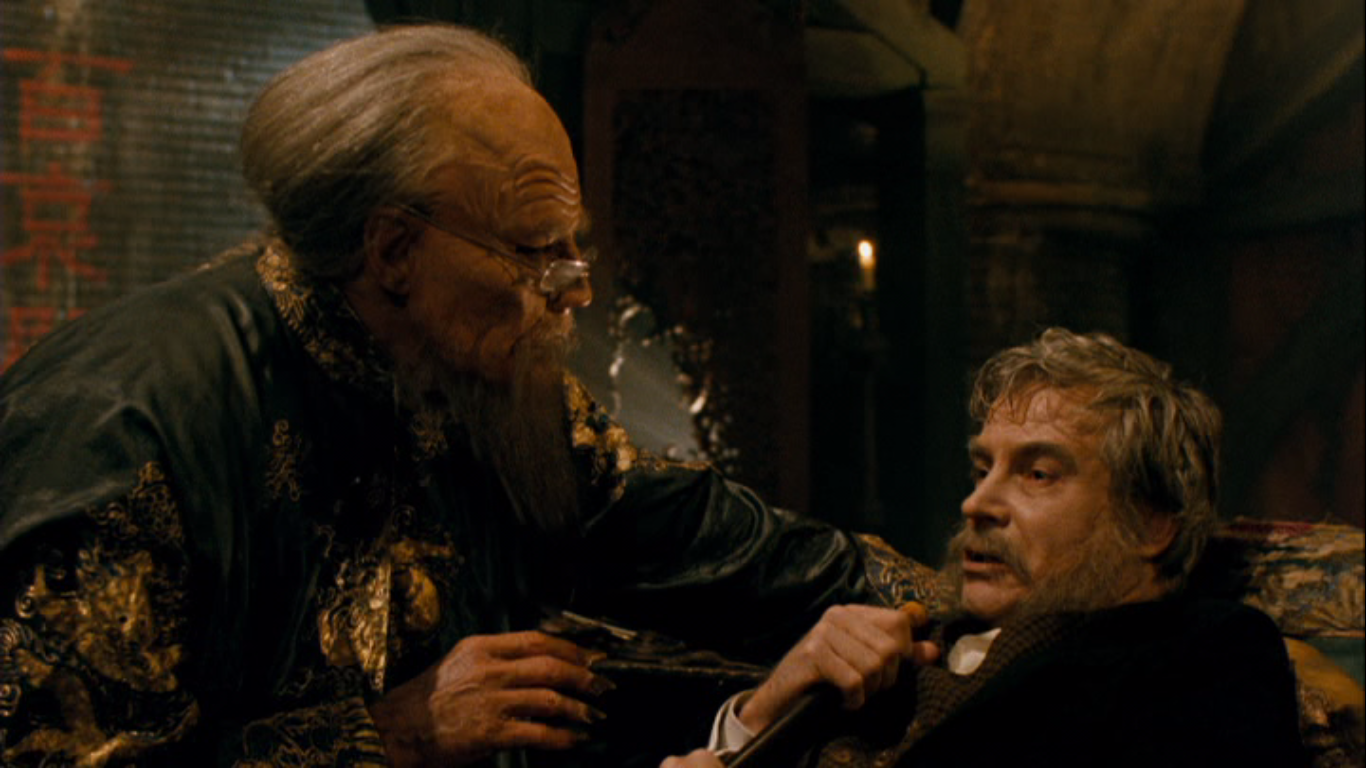 However, the film had some great qualities.  Of particular note was Harker, who made the transition her character required both believable and highly entertaining.  Castle was similarly excellent as the dying and tormented St. Claire, and his final scene was quite moving and effective.  Callow, while having a smaller part, was deliberately funny (in that inept way all policemen are) and brought that 'comic relief' the character required.

In a surprising turn, Charlton Heston's moment as Fu Tching was quite good (and better than his Sherlock Holmes).  One figures this Chinaman (to use the parlance of the times) WAS Holmes, but Heston was so good under the make-up it did make one wonder for a moment.  As Holmes himself, Heston was a bit theatrical (I figure drawing from the more broad performance the theater requires) but he was still entertaining.  One figures that Crucifer of Blood captures what Heston would have been like on stage, so that's a bit of a plus.  Fox has the 'evil Englishman' part pat, and he came off as a bit comical.

The Crucifer of Blood should not be seen as high theater (as one might see Charlton Heston's version of another play-turned-TBS film, A Man for All Seasons), but as light entertainment.  Certainly the play is that: the characters' names evoke other Sherlock Holmes stories (Neville St. Claire was The Man With the Twisted Lip, the boat the chase after Small being called the Gloria Scott, and Irene, well, one guess).  I can imagine the play being highly entertaining if one didn't think too greatly on it.  It was meant for a good time, and the film version of it should I think be seen in that vein.  I think Holmesians would get a small kick out of seeing all these little in-jokes thrown at them, and they don't disturb the flow of the story, another plus.

Charlton Heston certainly won't rank among the great Sherlock Holmes interpretations like a Jeremy Brett, Basil Rathbone, Vasily Livanov, or Benedict Cumberbatch (though for full disclosure, I prefer Jonny Lee Miller in Elementary myself).  However, Heston managed to hold his own (American accent notwithstanding) and kept things rolling.   It is a good thing that we got to see his stage version of Sherlock Holmes captured in the TV-film, and while not great it isn't the horror others might have made it out to be.  On the whole, I found Crucifer of Blood entertaining, like a night out at the theater, where I could forget my troubles and dabble in a little Victoriana.

It's unfortunate that the original John Watson in the Los Angeles production of the Heston vehicle was not in the film.  That actor's name?