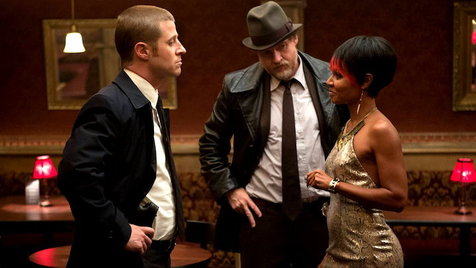 Gotham continues to balance the police procedural with the comic-book source material on the whole, rather well.  Selina Kyle oddly doesn't dwell too much on the title character, a figure we know will grow up to be Catwoman.  It's a bit of a tease, especially because we don't get to hear from her until at least halfway through her eponymous episode.  Having said all that, Selina Kyle is still a good episode where the crime-of-the-week keeps us within the Batman universe growing around us.

There's been a spate of homeless child abductions under the guise of the Mayor's Homeless Outreach Project.  Two figures, Patti (Lilly Taylor) and Doug (Frank Whaley) seemingly mild-mannered, are the abductors, stunning their child victims with a poison pen.  One of these homeless kids, Selina, who prefers to go by 'Cat' (Camren Bicondova) refuses Patti and Doug's generous offers of food, and flees when she sees what they do.  Another homeless kid, Mackey (Kyle Massey) also runs for his life with Doug chasing after him.  In the chaos, Mackey finds himself thrown through the window of a fancy Gotham restaurant.

In the abduction, a homeless veteran is killed, and that is the genesis of the investigation by Detectives James Gordon (Ben McKenzie) and Harvey Bullock (Donal Logue).  The upright Gordon is appalled that a fellow officer went to protect the restaurant rather than stay with the body, but this brings them to Mackey, who tells his rather outlandish tale.  To get some information, Bullock and Gordon go to Bullock's friend, mobster Fish Mooney (Jada Pinkett Smith).  They appear to let bygones be bygones (she had, after all, tried to kill them both).  She doesn't know anything about the kidnappings, but she has her own problems.  It seems her overlord, mobster kingpin Falcone (John Doman) talked to Fish's former minion Oswald Cobblepot (Robin Lord Taylor) because Gordon apparently bumped him off.  He told Falcone about Mooney's plans to overthrow Falcone.  Mooney denies this, and to show that he believes everything she says, he has her 'lover' Lazlo (Michelangelo Milano) beaten as they chat.

The police, who want to keep the abductions quiet, do find there is a drug in Mackey's system thanks to the analysis of CSI Edward Nygma (Cory Michael Smith).  This drug isn't used much ever since the Arkham Asylum was closed, but who then manufactures it?  Gordon and Bullock find the provider, and it looks like the kids are rescued in time.

Never underestimate the corruption in Gotham, though.  Mayor Aubrey James (Richard Kind) doesn't want these kids around, so it's upstate for these urchin.  Gordon, ever straight as ever, is angered.  It's imprisoning the children without trial.  Bullock, however, does remind him that Gordon has no real standing in the morality department, having executed a man (or so he thinks).  That same man, Oswald Cobblepot, is working his way back to Gotham for revenge, and he finds two frat guys to pick him up.  The fact that his walk reminds them of a penguin is a trigger for Ozzie, who smashes the beer bottle they gave him and ruthlessly kills one while taking the other hostage.  Oswald's disappearance alarms his mother, Gertrude Kapelput (Carol Kane), who files a missing person's report.

Cat is one of the kids going upstate, a fate she does not relish, especially since she insists she isn't an orphan and that her mother is somewhere.  However, to her horror, Patti and Doug masquerade as the bus drivers and take the unsuspecting kids from the holding center, for The Dollmaker does not tolerate failure.  At the docks Patti and Doug think they are one short, and at first find nothing.  However, Patti finds Cat and is not afraid to kill her off.  However, thanks to Bullock's rough manners with a witness they managed to find a vital clue that led them to the docks. Gordon doesn't object because if it's between letting Bullock beat a guy who held children hostage and the lives of forty children, "Saint James" (as Bullock called him) won't bat an eye.

Cat insists on talking to Gordon.  This isn't the first kid James had talked to these few days.  Wayne family manservant Alfred Pennyworth (Sean Pertwee) asks Gordon to talk to Young Master Bruce (David Mazouz) who has been injuring himself in an effort to 'test' himself.  Cat then gives Gordon shocking news: SHE knows who killed the Waynes.

Again, Selina Kyle as an episode really isn't centered on Selina Kyle herself.  She IS an important part of the story in that we do get a lot of the qualities that the future Catwoman will have.  She tells a frightened child on the bus that if attacked, he should go for the eyes (putting out her hands like cat claws).  We also see that she has the dexterity to move like a cat, and yes, she likes to be called 'Cat'.  For some, this is laying on a bit thick.  For me, I went along with it.

Selina Kyle really has a lot of balls in the air.  There's the main story of the child abductions.  There's the Fish Mooney subplot where she is swearing revenge on Falcone.  There is the Kapelput/Cobblepot subplot where Mrs. Kapelput is worried that some 'woman' has taken her little boy, while Ozzie is busy trying to get money to return to Gotham.  He is holding one of the frightened frat guys prisoner and at the end one isn't sure whether Oswald will cold-bloodily kill him as he did the other frat guy who ridiculed his unfortunate walk.  Then there's the story of James Gordon, attempting to keep the virtues in a town teetering on total moral collapse.  I give credit to Gotham producer and Selina Kyle writer Bruno Heller for keeping those balls floating remarkably well.  I did feel the Cobblepot storyline was underused (we see Oswald in the beginning, middle, and end but for all intents and purposes his story could have been either excised or the whole episode itself).  Apart from that I think the story flowed well enough to keep my interest.

One great highlight were the guest performances.  Taylor and Whaley had this bizarre throwback style to their Patti and Doug, as if telling you just by their excessively sweet manners that they really were quite vicious and evil.  They managed to keep their performances just this side of camp (though at one point Whaley, whom I had briefly mistaken for Peter Sarsgaard, appeared to be channeling Marlon Brando's Don Corleone when talking to their fence).

I also loved Carol Kane's whacked-out Mrs. Kapleput (I figure 'Americanized' to Cobblepot), Oswald's very own Mommie Dearest.  In turns endearing and slightly bonkers, Mrs. Kapleput's assertion that it was a 'woman' who had led her little boy astray (and caused him to be missing) is amusing and well, weird.  There's a certain Miss Havisham quality to Kane's portrayal, a woman who is not quite there.  However, seeing how she clutches the rather-flattering picture of her little Ozzie had me smile.  I just hope she returns for more guest spots for two reasons.  One, I'd like to see the interplay between mother and son played out more.  Two, is there really such a thing as too much Carol Kane?

As for the regular cast, despite her brief time on her own episode Bicondova made the most of her Cat/Selina.  She was tough and smart yet with a hint of vulnerability underneath.  McKenzie seems slowly warming up to making Jim Gordon this solidly square figure who is devoted to his profession.  I'm also liking Logue as the sleazy Bullock.  He's the type of person I'd say was a bad man but a good cop.  We have yet to see any overt corruption or funny business from him, so while he may be unethical, he has yet to prove dirty.  He's also able to make the most unsympathetic of figures almost endearing.  Gordon is appalled at how dismissive he is towards the dead homeless man, reminding him the victim is a veteran.  "And I salute his service, but he's still a dead wino", Bullock responds.  When Bullock reprimands Gordon for allowing his fiancée Barbara (Erin Richards) to tip off the press, he tells his junior partner that he is letting his desires entangle him needlessly.  "You, my friend, are a monkey riding a racehorse," he tells Gordon.

Pinkett Smith continues to keep a balance of camp and menace as Mooney where she delights in being evil.  She is matched by another standout in Doran, who has such a way with dialogue.  "Men who are about to die are very honest.  It pays to listen to them," he coolly tells Mooney before revealing his final conversation with Cobblepot.  The whole scene plays like a perverse replay of how Mooney dispatched Oswald when they had their 'mother/son' chat.  Claiming loyalty, Moony insists she would never betray him and that he shouldn't lose sleep over the moves of his rivals.  "I never lose sleep over my enemies.  It's my friends that keep me awake," he replies.

Couldn't have said it better myself.

If I find fault in Selina Kyle, it is the shortchanging of other characters.  Taylor's Penguin is still the highlight (though he has few scenes, they still provide great fear about how dangerous he is becoming), and the same goes for Mazouz's Bruce Wayne.  If they ever get them in the same scene, we'll have an incredible scene.  Both are becoming the performers who are running away with Gotham, and I hope that we will see more of them as the series progresses.

It also is frustrating me that Smith's Edward Nygma is still popping up in only one scene per episode so far.  Granted, his role may grow as the series goes on, but I think a lot of potential is being wasted on having him pop in quickly to just disappear as quickly.  I'd like a genuine moment of interaction with Nygma, Bullock, and Gordon, even dare I hope a scene outside work (does the Gotham City Police Department have a Christmas party?).  We need to get more of Cory Michael Smith as Edward Nygma, not so much as counterpoint to Taylor's impressive Penguin but because there is such a great potential in the future Riddler.

I still think Gotham is a great series so far, and Selina Kyle was on the whole a second strong episode to a series that is continuing to impress as both an independent series and as part of the massive Batman mythos.

Next Episode: The Balloonman
Posted by Rick at 1:11 AM