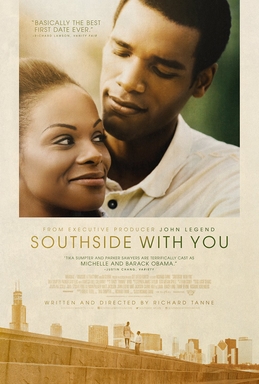 The concern with a film like Southside With You, the story of the first date between future President and First Lady Barack and Michelle Obama (formerly Robinson) is that it will go beyond hagiography into downright sanctification.  One might imagine that at a certain point in the film, the sky will open up, heavenly choirs will sing, a dove will descend on Barry, and we will hear an Orson Welles-type voice call out, "This is My Son, in whom I am well-pleased!"

It will end with Obama being taken up into Heaven, where Jesus Christ will bow down and worship the One True God.

You know, how Hollywood sees the former President.

To its credit Southside With You doesn't go full-on worshipful (though the midsection does have touches of idolatry). It isn't terrible or grand, but passable, with some charm and good performances.

Taking place over one long day, lawyer Michelle Robinson (Tika Sumpter) prepares for the arrival at her house of one Barack Obama (Parker Sawyers), a summer associate at the upmarket law firm where she is technically his supervisor.  She insists it's not a date, something that Barack pushes their time into being.  Ostensibly going to a community meeting, Michelle is surprised and a little irritated when the habitually late Barack tells her that this meeting won't be for a few hours.

He plans to take her to an African-American art exhibit...just to wander in.  While Michelle is none too pleased with this development, she goes along with it, as well as wandering through a park (I suspect Grant Park) before going to the community meeting (where Michelle is mistaken for Barack's newest girl and is dazzled by his speaking) and ending with some beer and a movie, Do the Right Thing (which she is eager to see).

As a side note, Do the Right Thing isn't my idea of a date movie, but there you go.

At the end of the day, Michelle is enchanted enough with Barack to consider this be possibly be a 'date' and perhaps for a second one. The question one should ask about Southside With You is simple: if their names were, say Terrence Smith and Kristen Jones, would we care enough to follow this, The Longest Date?  If the film is based on the actual first date, it was a very long date...lasting essentially from around midday to midnight.  Would our two young lovers-to-be interesting enough for us to care whether or not they go out again?

My answer is, not really.  Part of it comes from the fact that Michelle came across as a bit of a whiner, protesting too much about how this isn't a 'date'.  Part of it comes from the idea of a 'date' involving having the woman listen to this man give an impassioned speech that shows his greatness.  I think on how Obama, even then, had a way with turning phrases into something almost inspiring.

At the community meeting, Obama says to encourage the people that they should turn the 'no' to 'on', as in 'carry on'.  "They say 'no', we say 'carry on'", he intones, and you think that despite being a mere intern essentially, Barack Obama is dreaming of when he can say things like 'there's no Blue America or Red America, only the United States of America'.

And here is where I have a slight beef with Southside With You.  Writer/director Richard Tanne has perhaps too much love for his subject that ironically keeps our two young lovebirds a bit at a distance, as if we should marvel at them rather than fully embrace them as just two young people starting out a remarkable and beautiful romance.

We see this in how Obama is bathed in soft light when giving his speech and how Michelle's views on our lanky, chain-smoking cocky kid evolves into perhaps not love but slightly worshipful admiration.  Early, Tanne had a better scene where we could see Barack falling in love with Michelle when she is taken up by a little girl to do some impromptu dancing. We didn't need great theatrics to show that Barack went from finding Michelle pretty to finding her a potential life-mate.  We know that Barack liked Michelle, so we don't need much to show his growing enthusiasm for her (though curiously, his slight deceit to get her to attend the meeting and somewhat pushy nature show that he might have been a bit of a harasser, not respecting her 'no').  What we needed was for the strong, confident woman Michelle Robison is to emerge, and that scene of her looking at her well-spoken subordinate was, to my mind, the wrong kind of lovey-dovey eyeing.

As Southside With You is about the Obamas, we get to hear a lot about their families: Barack's absent father and essentially missing mother versus the strong family that the Robinsons were (we learn that, curiously the Robinsons never watched Good Times, preferring the more square Brady Bunch, and what this says about how the Robinsons saw the world is left up to the viewer).  It might have been a nice counterpoint: the distance that Obama's parent had from him versus the closeness that Michelle's family had.

Instead, we got nice talk from them about how Barack should forgive his 'incomplete' father (though curiously, no mention of how the future President's beloved grandmother, Toots, who helped raise him, was, in his own words, 'a typical white woman' afraid of black men).

In that respect, Southside With You is a little on the deification side.  Despite the slight adulation, when Barack and Michelle meet 'a typical white man', their boss Avery (Tom McElroy), we get a slight dig at the future President.  Avery wonders about Spike Lee's actions in Do the Right Thing, and Barack gives an explanation that appeals to Avery.  Once out of earshot, he gives a different answer to Michelle, which shows that Obama was different with people based on how he thinks they would react.

On the other hand, you had wonderful performances from our two leads, particularly Sumpter as the smart, elegant, but somewhat brittle Michelle.  Sumpter bears a closer resemblance to a young Michelle than Sawyers does to Barack, but they both are charming and likeable as the future First Couple.  Sumpter in particular carries herself with an air of confidence and perhaps with a bit of a chip on her shoulder, while Sawyers portrayal shows a slightly more charming, eager young man who has flaws (he attempts to hide his smoking) but who also finds that with a bit of charm and determination, he can make this woman his own.

It's a bit unfortunate that Southside With You could not avoid being a bit worshipful towards Barack and Michelle Obama.  It's due to that sense of adulation towards its subject that I'm marking it slightly down.  All the pity, since we got good performances and an interesting story to work with.  Again, the somewhat adoring manner the film treats its subjects leaves them just slightly a little off, as if they were like the paintings and sculptures at the Afrocentric art exhibit: something to admire and respect but also study and learn from rather than enjoy for their own unique beauty.

Ultimately, the question that I have about Southside With You (would we care about them if they were not destined for history) is answered with that slight, 'not really'.  They're a nice couple, pleasant enough, but not particularly interesting.  Maybe a movie about their evolving romance rather than their first date would have made them more human and less divine. 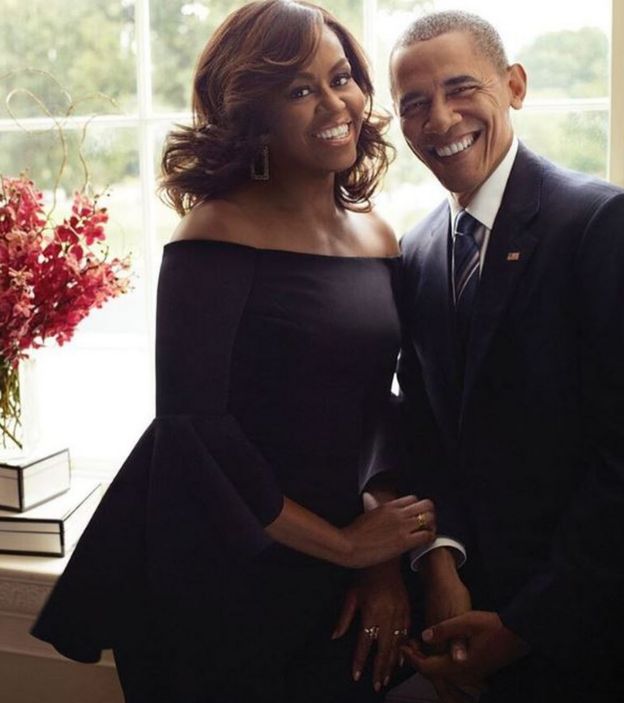