The Cape: The Complete Series Overview 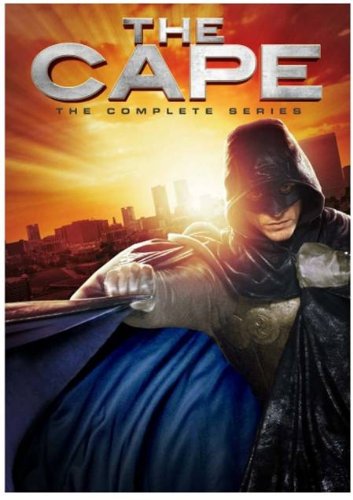 THE CAPE: THE COMPLETE SERIES

I can tell you quite easily why The Cape failed.

First, the title didn't suggest an action series.  It suggested a vacation home.  Second, selling a concept of The Cape (a man who is believed dead and becomes a secret vigilante based on a nonexistent comic book) would be difficult to an audience tired out from the Heroes debacle and seemingly more interested in labyrinth storylines a la Lost.  It seemed a bit too silly for mainstream audiences and not adventurous enough for Comic-Con devotees. Third, The Cape was creating an original superhero, so unlike something like The Flash, Supergirl, or even something a little more opaque like Legends of Tomorrow, there is no built-in audience for something like The Cape.

Finally, did I mention the title (one of the worst for a masked hero television series)?

Still, I was a fan of The Cape (one of a handful), who followed most of the episodes until I frankly couldn't find it anymore.  Perhaps The Cape was simply ahead of its time, now that comic book adaptations are all the rage (Arrow, for example, premiered a year after The Cape, though that was based on a previous brand, which opened the floodgates to such series as The Flash, Supergirl, Agents of S.H.I.EL.D., Agent Carter, Daredevil, Legends of Tomorrow, Gotham, and Luke Cage among others on a wide variety of viewing formats).

Perhaps, however, The Cape was bad, and my enthusiasm for it has clouded my 'analytical critic's mind', to coin a phrase.  Five years on, it is time to reevaluate The Cape, to see if it was shunted off too quickly, or whether it should remain a curious anomaly in the annals of action hero television series: an effort to create something original with vague connections to comic books that simply failed.

The Cape lasted all of ten episodes (the last one airing online only), and there was not enough if any interest to have it sent to another network or online (was there such a thing).

In a nutshell, The Cape was the following: Vincent "Vince" Faraday (David Lyons) is one of the few honest cops in Palm City.  He's so honest that when the Police Chief is assassinated, Vince is the one framed.  The actual assassin is, well, two-in-one: billionaire industrialist Peter Fleming, who has a secret identity of master criminal Chess (James Frain).  Faraday is not just framed for the murder, but is apparently murdered live on air, horrifying Vince's wife Dana (Jennifer Ferrin) and their son, Trip (Ryan Wynott). Adding insult to injury, Vince is declared "Chess", and all the criminal acts are blamed on poor Vince.  Fleming's company, ARK Enterprises, uses this to take over the Palm City Police Department, where Fleming begins to rule in an autocratic way.

Faraday is rescued by a group of thieves who call themselves The Carnival of Crime.  No surprise given that it is centered around circus folk, with the ringmaster/ringleader being Max Malini (Keith David).  Among his cohorts are the tough dwarf Rollo (Martin Klebba), a hypnotist named Ruvi (Anil Kumar) and a contortionist, Raia (Izabella Miko).  Malini takes Faraday on for reasons of his own, training him in various arts, with particular use of a strong cape that can do just about anything.  Faraday decides to clear his name, protect his family, and bring Fleming/Chess down by using a new identity, that of Trip's favorite comic book hero: The Cape. 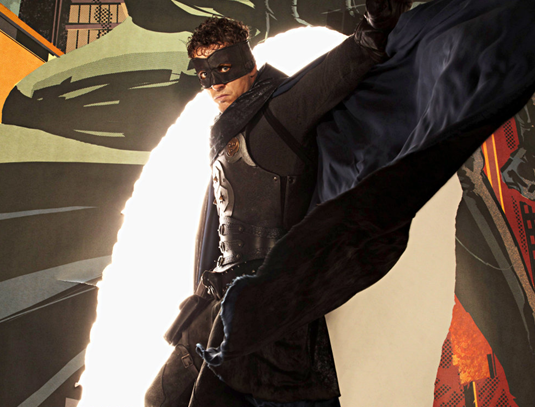 Aiding The Cape is a mysterious figure called Orwell (Summer Glau), a blogger who finds information on the criminal world and helps him fight both Chess/Fleming and various other figures.  One particular figure is Dominic Raoul, better known by his nom de guerre, Scales (Vinnie Jones), whose skin resembles that of a snake.

From this premise we go through both the growing conflict between The Cape/Chess-Fleming, and on occasion other criminals bordering on the super-criminal.  Dana and Trip attempt to rebuild their lives, with Trip getting actual visits from The Cape and Dana struggling with both the Faraday family friend, new Police Chief Marty Voyt (Dorian Missick), who is working with Fleming, and her own feelings for her new coworker, DA Travis Hall (Mather Zikel).

Again, I think part of the reason The Cape failed is because of the name.  It's a point of humor even among the citizens of Palm City: in one episode, when a store clerk hears that the person who saved him call himself "The Cape", he stares puzzled and says something along the lines of 'you'll work on it'.  Early on, the silliness of "The Cape" kept cropping up, and for me, if you can't get your characters to take part of the premise seriously, you cannot get your audience to do so.

The Cape seems such a silly title for a lead character (though in its defense, no less sillier than say, The Blue Beetle), and the idea that there's a comic book character called 'The Cape' whom Faraday can match is also stretching things a bit much.  We were faced with a superhero we didn't know and I figure many people just couldn't bother with investing time with him. 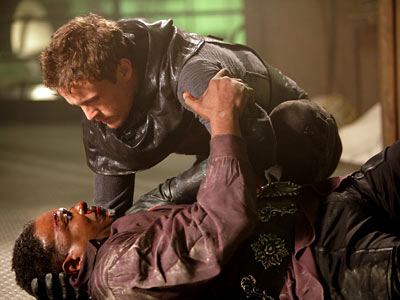 It's a real shame though, since The Cape has some extremely positive aspects.  At the top of the list is Lyons as Faraday/The Cape.  Lyons makes Vince's desire to return to and protect his family a real moving, touching aspect.  Sometimes I did find Faraday's straight-arrow nature a bit grating, coming off as excessively moralistic, especially against The Carnival of Crime.  Sure, they're criminals (only thieves), but they helped Faraday at his worst, providing him with food, shelter, and the cape itself.  Faraday getting all huffy about their criminal activities may stem from his cop mentality, but it doesn't make it more obnoxious.

As a side note, you have to love a criminal organization that calls itself "The Carnival of Crime", especially since they ARE a literal carnival (or at least hiding out in one).

Another high-point is Keith David as Max, the ringleader/master of said Carnival.  Malini is a wonderful character: shrewd, with a certain showmanship in his criminal capers, and someone who has a heart and a brain, a mixture of compassion and cleverness in dealing with people good and bad.  It's clear that Max is playing a long game when it comes to Faraday and The Cape, though what exactly it was we'll never know.

Keith is also blessed with one of the most beautiful voices this side of Creation, one who could say anything and make it sound wonderful.

I am of two minds when it comes to Frain's Chess/Fleming.  I wonder if it was a good idea to have started out with some sort of deranged villain when the whole 'evil businessman' aspect would have worked just fine.  It might also would have worked out well if we had a mystery around who "Chess" was instead of starting out with "oh look, Fleming is Chess".  The Cape at times seemed unsure as to how to pursue this storyline: sometimes Fleming could do bad all by himself (to coin a phrase), and others he looked like he was controlled by Chess.

Give Frain credit: at times he found the humor in the inherent lunacy of The Cape.  His efforts to 'be with the common man' fall flat, but in a humorous way.  Of particular note is when an effort is made to soften his image by having him wear a cowboy outfit.  The mixture of the seriousness, the evil of Fleming with this buckaroo ensemble is intentionally hilarious.

Still, the whole Chess/Fleming dichotomy at times made one wonder where they were going to take this.  Orwell's story was also a bit muddled: we learn that she is Fleming's daughter (something Faraday or the Carnival of Crime never learns) and that she might too be slipping into some mental issues.  I figure all this would have been explored if The Cape had continued, but that was not to be.

I found that Glau was not a great actress, but at least not a horror.  I can't quite say that for Ferrin and Wynott as Dana and Trip.  Wynott in particular seemed so blank and boring as Trip, not changing his expression from episode to episode.  For a while I found Ferrin pretty weak too, but it wasn't until the later episodes, particularly the series finale Endgame (which I think, if the show had continued, would have been named Deja Vu), that she seemed to pick up a bit.  Perhaps giving her a real conflict over staying true to her husband's memory versus her confused feelings for Travis helped.

I think it also helped to have Zikel play against her, for his character of Travis seemed to be a real person, one who is kind, attracted to Dana, a potentially good stepfather to Trip, and an honest man in the bastion of corruption of Palm City.

As I watched The Cape, there was certainly a good idea rattling around there.  An honest man forced to adopt a secret identity of an already existing character who fights crime might work.  Lyons and David gave consistently good performances.  The show was building, but sadly I think too many found the whole thing idiotic.

Mores the pity.  Perhaps in the future I'll do reviews of all ten episodes, but for now, all I can say is that I enjoyed The Cape.  Maybe it was silly, maybe it was absurd, but for me, it was entertaining.  Not brilliant, but entertaining.
Posted by Rick at 3:04 AM

Email ThisBlogThis!Share to TwitterShare to FacebookShare to Pinterest
Labels: Television Programs, The Cape