Curtains up!  Light the lights!  We've got nothing to hit but the heights!

Bates Motel is saying goodbye, as the merry adventures of our favorite mother-obsessed serial killer come to a close.  Dark Paradise, Season Five's premiere, give us a lot of Norman craziness, but a few really tender moments and what looks like one last solid mystery to engulf our beloved nut-job.

It's been two years since last we saw Norman Bates (Freddie Highmore) and his 'late' mother Norma (Vera Farmiga).  Since then, Norma's husband, former Sheriff Alex Romero (Nestor Carbonell) is still in the slammer for his involvement in the drugs trade, and Norman's half-brother/uncle Dylan Massett (Max Thieriot) is now happily settled in Seattle, with his wife Emma Decody (Olivia Cooke) and their daughter.

Both brothers are about to have their world upended.  For Dylan, it is the return of his father/uncle Caleb (Kenny Johnson), who is thrilled to be a grandfather.  Dylan, who at heart is very gentle, reluctantly agrees to let him stay with him and Emma, but Emma knows that this is killing Dylan.  She most reluctantly asks Caleb to leave.  If Caleb plans to see Norma, it would do him no good, for neither Caleb or Dylan are aware that Norma's dead.

Or is she?  Norman certainly seems to think that she is very much alive, though in his demented mind they both have to make out that she isn't, but is forced to remain inside the house forever 'to protect Norman'.  To the outside world, Norma Bates is dead, and even Norman says so, but it's clear that to him, Mother is very much with us.

Norman, however, is facing strange problems of his own.  First, there's his attraction to Madeleine Loomis (Isabelle McNally), the hardware shop owner who is beautiful, married but slightly flirtatious with Norman, and bears a resemblance to Norma.  Then there's the case of a man's wallet that Norman finds in his pocket, a man he doesn't know or remember ever registering.  One person he does remember registering is "David Davidson", someone who wants a room for a few hours.  The moralistic Norman won't rent out a room for assignations, but relents when he pays for the night.

Peeping through the hole, Norman becomes aroused at the sexual escapades of "David Davidson", but his own auto-erotic exercises are stopped when he gets a call from Mother.  Mother is displeased that Norman would want to start something with someone, and it is she who reveals a surprising secret: the man whose wallet they have came to the Bates Motel looking for Norman to kill.  It was "Mother" who stopped him, but why would anyone want Norman dead? 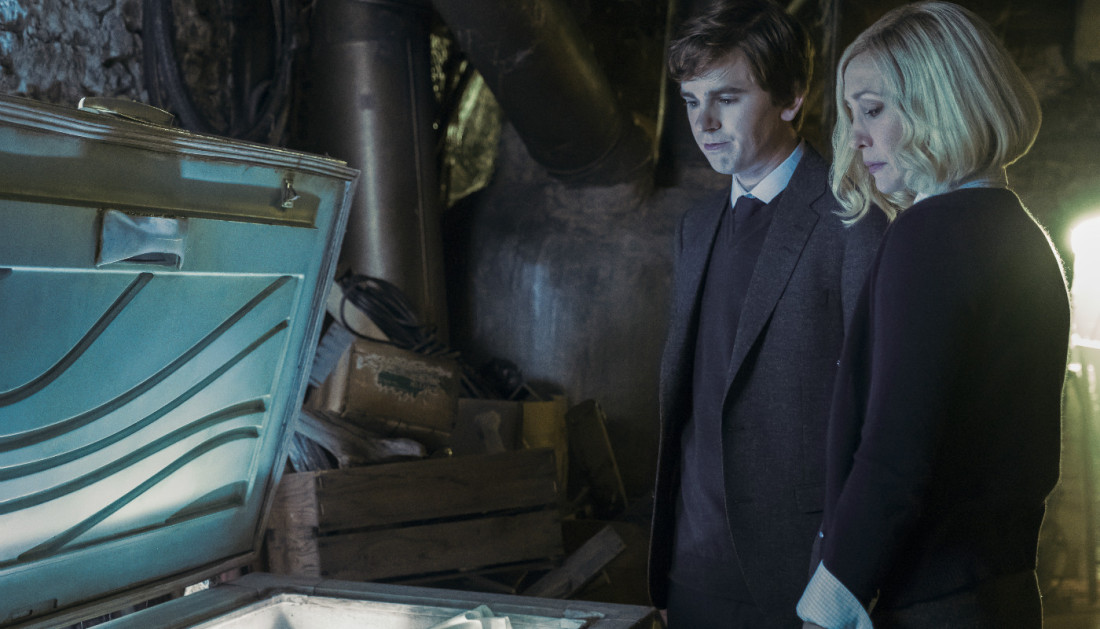 In many ways, Dark Paradise is a return to the beginning, for we end the episode in essentially the same way we ended the premiere episode from Season One (First You Dream, Then You Die...a title now tinged with irony after what happened to Norma Bates in last season's Norman, one of the most devastating episodes in the whole series, but I digress).

Whether this echo of the past was intentional or not, I would say it works brilliantly.  Dark Paradise is an excellent start to this, the final season, giving us just enough mysteries to pull us in, but actually answering the mysteries to build to new plot points.

The identity of the man in the wallet isn't answered until the end, and in such a way that it makes sense.  It also builds on what we know of Norman's totally unhinged state of mind while making clear that we are not going to get bizarre answers.  Norman, when told by Mother about the events that led to the man's death, asks 'logical' questions, such as how she could have come down from the house to the room so quickly.  She tells him "I don't know", which indicates that Norman may be so totally divorced from reality that things that would go against his ideas won't be answered but instead dismissed with non-answers.

We also see that Bates Motel is not skimping on the acting.  Highmore continues to make Norman almost sympathetic, even almost rational in how he behaves with others, but having that internal conflict between desire and despair forcing its way up.  Farmiga, who should have won an Emmy for her turn as the much-maligned Norma Bates, is now creating that idea of the domineering Mother that we all remember from Psycho, but we still see that she remains true to the character she created, someone who is not evil but just incapable of making good choices.

Thieriot is gentle as Dylan, the only sane member of the Bates extended family, and his scenes with Cooke are moments of calm in the storm of lunacy and mayhem Bates Motel unleashes.  It just seems such a pity that Cooke's Emma was given so little to do, since she was one of the standout characters.  Both Johnson and Carbonell had smaller parts, but they were strong in their limited scenes.

Dark Paradise is a great way to start the beginning of the end of this most twisted tale.  It's a pity that we'll have no more Bates Motel when the ten episodes are up, but as Farmiga said in the intro, 'it's time to check out'.

Next Episode: The Convergence of the Twain