At last, at long last, one of the biggest moments in Bates Motel (apart from a killing in a shower) has come about.  Norma Bates, the centerpiece of Bates Motel and the entire twisted Bates Family story, victim, victimizer, this singularly tragic woman, has finally shuffled off the mortal coil.  The exact nature of her death, the exact nature of her relationship to her son/namesake Norman Bates, all that is at an end.  We now know, if Bates Motel is to be believed, that she was not a monster, not a clinging, possessive woman.  She was, rather, a woman willfully blind, unaware of the damage she was doing, loving deeply but not well.

Sheriff Alex Romero (Nestor Carbonell) is terrified of his stepson, Norman Bates (Freddie Highmore), with reason.  Norman had threatened him with an ax.  Romero wants Norman sent back to Pineview or another mental institution, clearly concerned for the lives of everyone, including his wife, Norma Bates (Vera Farmiga).  Norma, for her part, stubbornly refuses to do that, insisting with regards to her and her son, "We are two parts of the same person".

In desperation, Romero goes to Dylan Massett (Max Thieriot), Norma's other son and Norman's half-brother/uncle.  Romero tells Dylan that he needs two signatures from family to get Norman recommitted, and since Norma won't do it.  Dylan asks Romero to let him speak to his mother, and that doesn't go well either.  Dylan confronts her about the earring he found in Norma's coat, the one that belonged to Emma's now-missing mother Audrey.  Norma, despite all that she's been presented with, stubbornly refuses to see that Norman is simply not well.  Moreover, she's mad about both Dylan and Romero for planning this.

Romero has his own issues, as his former lover Rebecca Hamilton (Jamie Ray Newman) attempts to entrap him, in the most inept way possible.  Romero immediately sees through this and tells the DEA to go do things to themselves.

Norma writes a brief note to Romero telling him it's over, putting the ring he gave her back in the envelope along with her note. Norman and Norma, still in their heat-deprived home, are convinced that they should be together forever, and Norman plans out a great future for them: moving to Oahu and living together, apart from all these 'crazies'.  As Norma starts to dream away, Norman starts casually and coolly starts to close off all the vents after he turns on the broken heater.  The gas starts spreading throughout the house, and he snuggles up to his mother.

Romero comes in, wanting to patch things up.  Upon entering, he senses something is wrong.  Rushing up to her room, he drags both of them out and smashes windows in a desperate attempt to save their lives.  Norman does manage to wake up, but Norma has drifted off into a beautiful sleep, forever... 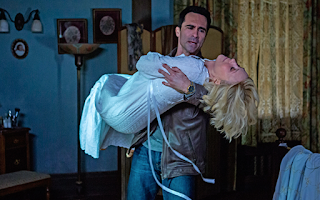 Forever is the most gut-wrenching episode in Bates Motel, certainly in Season Four if not the entire series (sadly coming to an end next season).  It's also the flat-out creepiest, filmed beautifully and frighteningly.  To the strains of Mr. Sandman by Nan Vernon, we see Norman calmly closing off all the vents to ensure a murder-suicide where mother and son will be united in perpetuity, and it would have succeeded if not for Romero.

Filmed in cool blue, with a cold, expressionless face by Freddie Highmore, the mix of colors, performances, and the song makes it the most frightening and tragic sequences in Bates Motel history.

We see the joy and hope in Norma Bates' face as she slips into a lovely dreamworld where she dies in happiness, but still dies in a cruel way.  All the elements of Norma's final moments make this sequence cruelly beautiful, but also deeply sad and intensely creepy, the tension and horror of it all coming at you unabated (no pun intended).

In terms of performances, as much as I have never quite warmed up to Dylan as a character, Forever is I think Max Theiriot's finest hour in Bates Motel, where he gives his best performance.  Who'd think the ex-drug kingpin would be the most sane, rational, normal, and kind person in White Pine Bay?

His fear and concern and genuine love for Norman and Norma, mixed with his frustration and anger at Norma's refusal to do anything, builds to a tragic crescendo.  His scene with the equally fantastic Carbonell as they discuss putting Norman away is an exercise of realistic tension between two people who know the danger but cannot pull enough strength to stop it.

Farmiga, the only person nominated for an Emmy for her performance in Bates Motel (and frankly who was robbed and who should have been nominated consistently for her fantastic work) has her final turn as the living Norma, and she does what she always does: be fantastic.  From her mix of delusional and defensive and denial to the genuine sincerity in her love for her troubled son and her last moments of joy at the thought of starting over, Farmiga infuriates you and breaks your heart.

Highmore too, again, always excellent as Norman Bates, who now is so far off the deep end nothing short of institutionalization can save him (and others).

Forever, is short, I think probably the best Bates Motel episode, of both the season and maybe the entire series.  I might have said that already, but everything about it: the acting, the cinematography, the story, works so well that it brings the tragedy of the Bates family behind it to life.

We now know that there was no actual incest between Norma Bates and Norman Bates.  We now that Norman was not in his right mind when he killed his own mother.  We also know that, contrary to my memory of Psycho, his mother and stepfather weren't murdered together.

Norma Bates' reputation has been restored, and we see that she, rather than the clinging, grotesque woman who would never let go of her son, is instead a tragic woman, blinded by love for her son.