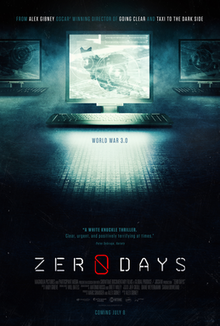 We have been warned.  Zero Days, the searing documentary, is not quite what I call an 'advocacy film' (a movie that says it's a documentary but that really pushes a particular point and urges action).  It does suggest that it does ask for action (to be more open about cyber-warfare), but it doesn't call for the viewer to sign a petition or contact their Congressman or agitate for change.  What Zero Days does, and does well, is present its case as to how cyber-warfare, far from making us safer, is potentially putting us in greater danger.

Zero Days details the discovery of the so-called Stuxnet virus (so called because its creators, whoever they are, never actually called it that).  Unlike other malware, Stuxnet was very specific to both its target and even target date, very intricately created, and very secret.  Despite the evidence that Stuxnet was a joint American-Israeli creation to take down the Iranian nuclear weapons program, no one has ever admitted to knowing anything about it.

It was the fear of Iran creating a nuclear weapon that brought Stuxnet into existence, and it looked like the program, dubbed Olympic Games or O.G., was working the way it was meant to work.  As things progressed however, if the whistleblower(s) are believed, the Israelis started getting anxious as to what they considered the slow pace of Stuxnet.  As a result, what had been humming along was altered by them, without the Americans knowledge or approval (and much to the creators anger).  The Israelis also started assassinating Iranian nuclear scientists in their fear and paranoia over the Iranian nuclear program.

As a result of shall we say, the Israeli overenthusiasm, Iran soon caught on to the game and decided two could play it.  Putting their own minds to the task, the Islamic Republic opted to do a little cyber-warfare of its own, targeting American interests.  Adding more fun to the mix, soon the Russians, the Chinese, and even the North Koreans decided to join in.  Now with a whole world of war going on in a semi-Matrix-type universe, the overprotection of our technological prowess (and the growing danger of our enemies own prowess) is endangering the world entire, especially since no one wants to talk openly about it.

The danger is real, and until confronted and recognized, it will only grow and grow.

I think one thing that I'd like to address off the bat that makes Zero Days a bit hard to take is director Alex Gibney's decision to double down on the 'eerie' score by Will Bates.  Right from the get-go the 'ominous' music I figure is suggesting the dangers cyber-warfare poses for the world entire.  However, to my mind at times it seems a case of gilding the lily.  I don't think it's a bad score.  I just wonder if Gibney couldn't have pulled back a bit from it being so ominous, so menacing, so 'LOOK OUT THEY'RE COMING TO KILL US ALL!!!".

In this case, maybe less would have been more.

Apart from that though Zero Days does its job well of presenting us with both a fascinating (if at times excessively technological) history of a special breed of malware and on the dangers versus the benefits of using computers as weapons.  One is left wondering whether, if not for Israeli aggressiveness bordering on paranoia, Stuxnet would have been a long-term success that would not have required the Iranian nuclear deal signed off on by the Obama Administration (an agreement that seems on unsteady ground with the incoming Trump Administration).

One also finds out some rather curious, almost amusing information about the new frontier in war courtesy of the 'informant' (actress Joann Tucker speaking their words to protect their identity).  For example, when the National Security Administration (NSA) along with the Central Intelligence Agency (CIA) joined forces to make Stuxnet, there was a very strange atmosphere.  The informant calls it a mix of the military macho and the geek culture: some of the people there being very firm, tough military types, and others not so much.  One of the Olympic Games creators would always wear a yellow cape and created a model Death Star out of Legos (the group as a whole hated the term 'Stuxnet' and would never call it that).

We also get some revealing information from the most unlikely sources, not on Stuxnet itself but on the excessive paranoia behind cyber-warfare itself.  Michael Hayden, former director of both the CIA and the NSA, himself expresses the idea that cyber-warfare technology is overly classified.  He expresses concern that things are slipping out of hand and that soon cyber-warfare will become unmanageable if no one acknowledges it publicly.

Hayden is no bleeding-heart liberal, and certainly no fan of Edward Snowden (who revealed much too much in Hayden's view).  However, if someone like a Hayden is concerned, then everyone else should be regarding the ramifications of what he terms 'Computer Network Attack'.

Yes, sometimes the music is a bit overboard and some of the technobabble gets in the way (though the animated sequences and when Tucker as the informant is on-screen in digital form, is beautifully rendered).  Apart from that Zero Days is a sharp, bright documentary that should make liberals and conservatives question whether a weapon of our devising, used in an ethereal world, will in the end destroy its own creation: the technical Frankenstein's Monster.