We kill that which we love most.

Norma Bates (Vera Farmiga) is dead.  Whether her son, Norman Bates (Freddie Highmore) fully realizes it or not is questionable.  In his mind, he appears to think that Norma is merely faking her death to have some peace.  Every time he's called to handle funeral arrangements, he isn't strictly detached from things as he is not quite sure if they are actually happening.

One person who is more than aware of what's going on is Norma's widower, Sheriff Alex Romero (Nestor Carbonell).  He knows that it was a murder-suicide, but not like the police think it was (with Norma being the murderess).  Norman's smugness and self-righteousness about his mother knows no bounds, and Romero, already enraged and hurt at Norma's death, is determined to prove that Norman committed murder.

Romero needs to grieve, and does so by placing the ring Norma took off back on her finger at the morgue.  Norman's total hostility to Romero, however, will not grant Norma any peace.  When he is given a rare moment to see his mother before her body is prepared for the casket, he angrily removes the ring.

At the funeral, to which he is the only mourner (he insisting Romero stay away and not informing his half-brother Dylan or his uncle Caleb), Romero and Norman have a final confrontation, where Romero punches him.  Norman, who I figure is divorced from reality concerning Norma, goes to the cemetery and digs her up.  He seems genuinely confused as to why she isn't waking up.  Nevertheless, he takes her home.

He grows more frustrated that she isn't responding to his calls to move or react, and even gluing her eyes open doesn't help with this Weekend at Norma's type behavior.  An unexpected visitor comes in the form of Chick (Ryan Hurst), who comes to offer condolences and who sees Norma's body but says nothing, other than a vague suggestion that Norman accept things as they are.

Norman about to commit suicide himself, is stopped by the sound of a piano playing I'll Be Home for Christmas.  He wanders downstairs, where he sees the room festively decorated and Norma Bates, alive and well and happy.  Now they can be together, alone at last.  Romero, for his part, is about to go to kill him when he's stopped by the DEA and arrested for perjury in their continuing investigation into Bob Paris' activities. 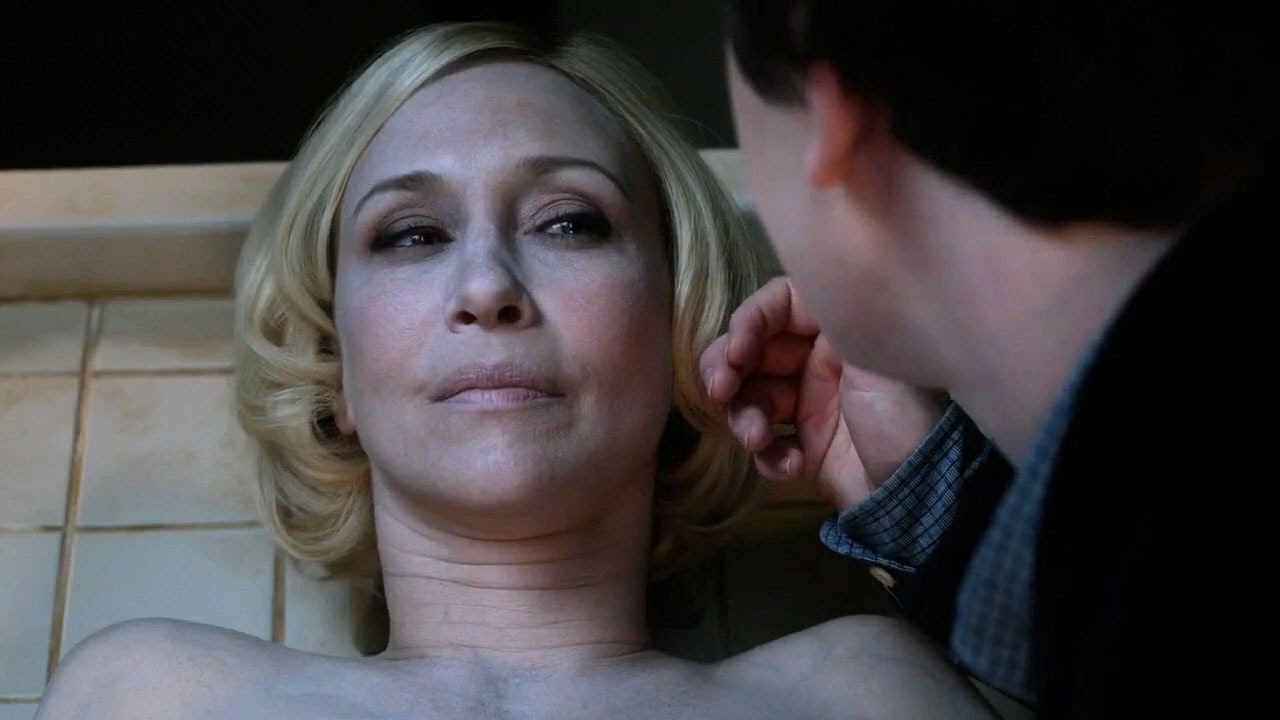 Part of me wants to giggle at the idea that Vera Farmiga had the easiest and hardest performance in Norman as a corpse.  She had to remain still and not have reactions, even as her eyes are gruesomely held open and give her a freakish, possessed visage.  It was easy in that she didn't have any lines to remember (apart from the end) and didn't have to react to anything.

It was hard in that she had to be convincing as a dead person, 'awakening' only once to a not-surprised Norman.  Farmiga, even when literally playing dead, is brilliant.

Highmore had to carry most of Norman himself, which makes the title all the more fitting.  He continues to make Norman Bates into a fascinating, disturbed figure, believable in his arrogance, smugness, and inability to come to terms with Norma's death.  He is so convincing in the way Norman doesn't really get that Norma is dead.  Part of his understands that, but part of him continues to believe it's some sort of rouse to keep others away.  That mix of panic and denial that has pushed his mind beyond repair is fascinating to watch, and it's a brilliant performance.

It's really a three-person show (and one of them plays dead), and in the third person, we have Carbonell as Romero.  His grief and anger mix well within the agonized and angry Romero, and the last-minute surprise of his arrest leaves us with just the right tease for Season Five.

Thieriot, who has one scene, is also effective as the torn Dylan, who wants to have some reconciliation with Norma and is unaware that she is dead (Norman not bothering to tell him).  The fact we know she is and he doesn't makes it all the more heartbreaking, and Thieriot brings that sincerity of someone who wants to do good and won't have the chance to do so.

There were a couple of things that brought it down.  Is it now a tradition to end every season of Bates Motel with a song?  The ending was a bit similar to Season Three, where Be My Baby ended the season if memory serves correct.  I also would not have minded if Chick were killed off (the only time where I was all but screaming PLEASE KILL CHICK!).

Part of me doesn't think Norman would really kill himself, as narcissists generally have too high an opinion of themselves to actually commit suicide.  Part of me however, imagines that he was stopped not by morality but by his own world of imagination where Norma was alive.  I also wonder if the 'suicide note' was a bit too convenient for both Norman and Romero's stories.

Finally, I wonder if the Wilcox & Son Funeral Home family will come back.  The interplay between the father, the son, and the daughter looks oddly like a good spinoff.

Norman is a tragedy, a brilliantly made one, where despite himself a small sliver of one is almost sympathetic to Norman Bates.  It will be fascinating to see how Season Five goes.

Season Four Overview
Posted by Rick at 8:00 AM