Is it just me, or is the Marvel Cinematic Universe the world's longest-running geek soap opera (or at least the most expensive one)?  Our newest entry into this world is Doctor Strange, the adaptation of yet another Marvel comic book hero, unique in that he has no superpowers but instead uses magic and sorcery to do his work.  Doctor Strange doesn't break the mold when it comes to how Marvel Studios does things: intro to new character, training, get new villain, secondary characters who at times have little to nothing to do, have hero & villain face off, and set up for next movie.

However, Doctor Strange also manages to get humor right, gives us simply astonishing visuals (which put it at the forefront of the Best Cinematography Oscar race) and generally balances the fantastical elements of the story with the realistic ones.

Doctor Hugo Strange (Benedict Cumberbatch) is a brilliant but arrogant surgeon with exceptionally dexterous hands (think a mix of Hugh Laurie's House and Tony Stark).  His long-suffering ex, Christine Palmer (Rachel McAdams) endures him, recognizing his abilities but not happy with him as a person.  One fateful night, he is in a car accident.  He survives it, but his hands are extensively damaged, and thus he loses both his medical abilities and his will to live (save for returning to his former glory).

In his search to heal thyself, he hears of a former patient that he dismissed as beyond help but who now not only can walk again but can play sports.  This patient, Jonathan Pangborn (Benjamin Bratt), tells Strange how he healed: it was through the power of Kamar-Taj, a secret mystical shrine deep in Nepal.  The atheist and arrogant Strange dismisses the idea out of hand, but in desperation opts to investigate it, if only to perhaps find if Eastern medicine/medical techniques can do what Western ones could not.

Unbeknown to him, he has been watched by those at Kamar-Taj, especially The Ancient One (Tilda Swinton), and her protégé, Mordo (Chiwetel Ejiofor).  They are masters of the mystical, ensuring the safety of our world against other realms of the supernatural and alien.  Strange is for once humbled when he is shown other universes by being separated between the physical and astral planes...and is promptly rejected from being inducted into the occult secret society. He will not be denied, and eventually The Ancient One agrees to take him on.  Strange proves a brilliant but erratic student, devouring knowledge but still limited in his comprehension of the supernatural, stubbornly holding on the reality of the physical universe while not embracing the truth of other worlds.

His training is needed more than ever, as the villainous Kaecilius (Mads Mikkelsen) is attempting to gain world domination and immortality, two things that no one should have.  He has killed the former Head Librarian at Kamar-Taj to get at forbidden knowledge (knowledge that Strange himself has toyed with) and will stop at nothing to get his way.

Strange and Kaecilius begin a lengthy battle, one that transports Strange to various places (including back at the hospital where Palmer, in a state of shock to see Strange both in elaborate garb and leaving his own body) attempts to save his life while he battles on.  Strange is told that The Mystical Warriors he is with are a bit like The Avengers...sorcerers who fight mystical dangers.  In the war between Strange and Kaecilius (and their minions) Strange finds his own enchanted object (the Cloak of Levitation) and meets the ultimate foe: Dormammu from the Dark Dimension, a powerful being that has promised Kaecilius that immortality he seeks.

The final battle is in Hong Kong (as a side note, the fact that many American films, particularly big-budget films, now cater their work to the Chinese market I'm sure had NO connection to the final battle being in Hong Kong).  Through a little trickery of his own, Strange defeats both, but at a cost.  Mondo, disillusioned, walks away.  The Ancient One finally dies, and the talisman at the monastery is one that contains another Infinity Stone that might play a role in future adventures.

This last bit of information made someone in the audience gasp, meaning there's a grown man who got excited over a throwaway bit of detail that I am barely conscious of, solidifying my idea that the Marvel Cinematic Universe is, indeed, the world's longest (and/or most expensive) soap opera.

Benedict Cumberbatch has received great acclaim (and an Emmy) for his role in Sherlock (though I'm one of the few dissenters of both Sherlock and his version of The Great Detective---VIVA JEREMY BRETT).  He has filled his quota of Oscar-bait material with The Fifth Estate and The Imitation Game (coming up with his long-sought Best Actor nomination for the latter); now he delves into more commercial fare to shift into being a STAR and not just an ACTOR with a pretentious name in pretentious projects.  As much as I am not a Cumber-whatever, I concede that I think Cumberbatch makes a perfect Strange: his melodious baritone and haughty manner a perfect fit for our arrogant hero.  He makes Strange that arrogant figure humbled and ultimately heroic, a curious character study in the craziness that is the Marvel Cinematic Universe.

There was a lot of criticism when the Anglo Swinton was cast as a supposed Asian character (the film mentions that she is really of Celtic origin I figure as a way to paper over that discrepancy...and omit the Tibetan origins since, you know, the Chinese pretend Tibet never existed).  Putting aside the fact that this might be a bit of whitewashing, I soon forgot that Swinton wasn't Tibetan, her great range and acting ability powering over those objections (though there is a case as to whether it was a good choice to cast Swinton at all).

No question on Ejiofor as the noble, perhaps too moralistic Mondo, and Benedict Wong as "Wong", the head Librarian with one name.  Like Eminem, or Adele, or Beyoncé. 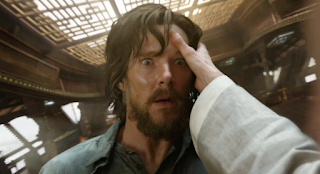 What is surprising in Doctor Strange in terms of overall tone is that it has more humor than some of the other MCU films and actually manages to make them if not laugh-out-loud funny, at least less serious than others in the franchise.  I understand Cumberbatch has a wonderful sense of humor in real life that his roles don't show (I put it to his voice sounding so serious that jokes might come across as threats).  His interplay with Wong (Strange seems positively aghast that Wong has never heard of Beyoncé, down to letting him borrow his iPod so as to listen to Single Ladies while Strange pokes around the Library) is not hilarious, but shows that Doctor Strange is making an effort to not be so deadly serious.

Same goes whenever the Cloak of Levitation comes to life and starts slapping the various henchmen that threaten Strange.  Doctor Strange isn't a comedy, but it makes a choice to try and have a little more fun, which in this case was a smart decision.

Doctor Strange also has some astonishing cinematography when Strange travels to other multiverses. My friend Fidel Gomez, Jr., who came with me and is a Doctor Strange fan, commented that at times it was 'visual overload', and I agree with him: sometimes you are so overwhelmed that one is in danger of getting nauseated at it all.  It is splendid to look at, and I can imagine Doctor Strange receiving a Best Cinematography Oscar nomination, but part of me is thankful I didn't see it in IMAX lest I go insane with it all.

The comparisons to Inception are appropriate (and I figure Doctor Strange outdoes Inception in terms of the visuals of time/reality bending). Given however, that this is a world of the supernatural, it isn't all that much to complain about.

Sadly, Doctor Strange still hasn't come up with a good way to do villains.  Mikkelsen was a wash as Kaecilius, but I think that no one really could have done much with the role.  The Marvel Cinematic Universe has yet to have a real good villain.  Apart from Tom Hiddleston's Loki in the Thor movies (the film series that I consider the weakest of the franchise), every villain in a MCU film has been pretty weak or uninteresting. Doctor Strange keeps to that, since Kaecilius (or the Galatcus-type Dormammu) is not a menace or played as though he/she were going to be anything other than a plot device.

It also relegates McAdams to an uninteresting character, one who is just there to mope for Strange or against Strange.  She is not integrated well into the film, and apart from Black Widow, has there been a positive, strong female character in the Marvel Cinematic Universe on a recurring basis?

I will also say I wasn't too thrilled with the 'timey-wimey' resolution to the conflict.  I actually groaned as to how Strange defeated Dormammu, but I put that down to Doctor Who fatigue.

Still, apart from those quibbles, Doctor Strange is a MCU film that manages to be separate from the overall universe and still find itself within the overall narrative of the world's longest/most expensive soap opera.  Splendid visuals, a great performance by Benedict Cumberbatch (complete with obligatory shirtless shot), Tilda Swinton, and Chiwetel Ejiofor, a nice bit of humor, great action and visuals, Doctor Strange shows that Marvel Studios has yet to make a truly bad film.

And as a side note, the opening credits for Marvel Studios are quite impressive too.

Next Marvel Cinematic Universe Film: Guardians of the Galaxy Vol. 2