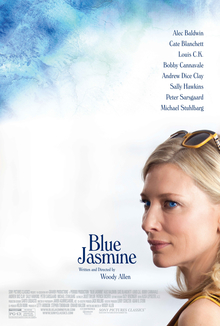 When I saw Cate Blanchett win Best Actress for Blue Jasmine, I was a bit perturbed.  I had favored Amy Adams for American Hustle, but I also had not seen Blanchett's performance.  Therefore, I couldn't outright rule that the Academy had done wrong.

Having seen Blue Jasmine, I have to say...sorry, Amy.  You're among our best American actresses working today.  You also have a terrible ability to give great performances in years when other actresses give equally great or at least more popular performances, and 2013 was no exception.

And for the record,  Amy Adams should have won Best Supporting Actress over Anne Hathaway.  I didn't like The Master, but I don't think you should get Oscars for singing ONE song either (and I say it as someone who opposes Hatha-Haters).

Blue Jasmine is essentially Woody Allen's version of A Streetcar Named Desire.  Wealthy socialite Jasmine Francis (Blanchett) now finds herself in dire straits (over the course of the film, we see it is because her husband was a Bernie Madoff-type who fleeced several people, including the former Jeannette-now-Jasmine's family).  It's to this family that Jasmine returns to for shelter, so it's off to San Francisco to crash with her sister Ginger (Sally Hawkins), who is no wealthy woman herself.

Ginger and Jasmine have almost always had a difficult relationship, made more so by Ginger's newest boyfriend, mechanic and all-around gauche Chili (Bobby Cannavale).  The elegant and sophisticate yet dirt-poor and inept Jasmine finds Chili a boor, and isn't too keen on the guy Ginger and Chili set her up with as part of a double-date, Eddie (Max Casella), as loutish as Chili.  Jasmine attempts to put her life together by working at a dentist's office, but Dr. Flicker (Michael Stuhlbarg) is a leech and she quits in disgust.

A woman of breeding and refinement, she does catch the eye of up-and-coming politician Dwight (Peter Sarsgaard).  Passing herself off as an interior decorator and recent widow (things that are technically true if wildly misleading), Jasmine uses her cultured manners to woo Dwight, and the two do fall in love.  Ginger finds a new beau as well: Al (Louis CK), a seemingly better choice than the lowbrow Chili.

However, the two sisters are bound for heartbreak.  Ginger finds out that Al is married, so she goes back to Chili.  Dwight discovers Jasmine's true history, courtesy of a run-in with Augie (Andrew Dice Clay), her ex-brother-in-law who was bilked out of his lottery winnings by Jasmine's late husband.  Dwight calls off the engagement, leaving Jasmine devastated and a little more unhinged.  The final break from reality is when Ginger and Chili reconcile, and Ginger sides with Chili over Jasmine.

Jasmine, now basically bonkers, walks out of the apartment and onto a park bench, carrying on a conversation only she can follow or understand.

Blue Jasmine has at its core Blanchett's brilliant performance.  She runs through every aspect of Jasmine's persona: the wealthy woman who wants to leave what must have been a more poverty-stricken early life behind, a woman lost in more ways than one, the elegant sophisticate wooing and being wooed by Dwight, the furious scorned wife who tips off the government about her husband's malfeasance, someone attempting to hold on to some form of dignity despite all the indignities placed on her, and a probably-now completely unhinged woman past her wit's end.

Blanchett makes Jasmine into the new Blanche DuBois (though not completely as flat-out bonkers as Blanche was).  There is something almost naïve and endearing about how Jasmine wants to be elegant and sophisticated, how she wants the world to be and cannot make it be that way.  She doesn't want real, she wants magic...and this is her undoing.  It isn't that she is evil: she does have affection for Ginger and does come to care for Dwight.  She has a mixture of anger and sincerity that makes fascinating watching. Hawkins is her equal as the Stella to her Blanche (let's face it: it is almost impossible not to see Blue Jasmine as a variation on the Tennessee Williams play.  It might as well be called a remake of Streetcar).  Her Ginger is generally sweet and without airs or pretense, and while she loves Jasmine she also sees that Jasmine is nothing but trouble.  As boorish as Chili may be (and the double-date is one of the moments where I sided with Jasmine), Ginger appreciates his loyalty to her.

Blue Jasmine is one of the best-acted films in the Woody Allen oeuvre, from the Mitch-type Dwight (only wealthier) to the working-class Augie, showing that Clay is more than the foul-mouthed comic who caused Saturday Night Live castmember Nora Dunn and scheduled musical guest Sinead O'Connor to not appear on Saturday Night Live when Clay hosted.

There were a few missteps.  A part of the story involves Jasmine's inability to use a computer at all (she wants to take online courses, but finds the use of a mouse or keypad a total mystery).  This did seem a bit too much for a woman in her forties (a man in his seventies, perhaps).  The subplot with the dentist comes and goes rather quickly, and I'm not too sure why Al had to be married and have Ginger set up for disappointment.

These are not major issues that sink the film.  Blue Jasmine is a well-acted, well-written film that has moments of humor but also moments of drama.  It is one of Woody Allen's best films and one that shows why at least that year, Amy Adams was denied.