The Librarians: And the Fatal Separation Review 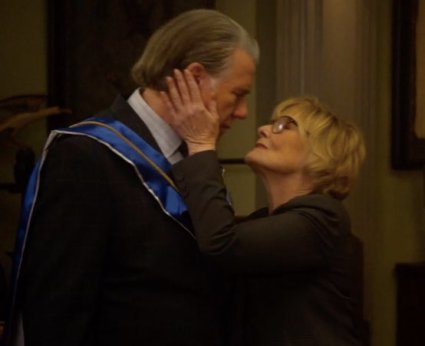 THE LIBRARIANS:
AND THE FATAL SEPARATION

A little monkey business is in store for the episode of The Librarians.  And the Fatal Separation has a lot more action and appears to be a showcase for a fan favorite: Christian Kane's Jacob Stone.  It brings to mind last week's episode, where one Librarian's story was at center of things.  And the Fatal Separation had a lot of action, a lot of comedy, and even managed to give everyone, even the guest stars, a moment.  One 'twist' to my mind didn't work well, which brought things down a bit.

We got to Shangri-La, where Stone has been in training in the martial arts (which should not be confused for THE arts per Meryl Streep's dictates), by none other than Shangri-La's leader, the Monkey King himself (Ernie Reyes, Jr.). Stone has progressed well both in the martial arts and in the philosophical wisdom he has gained, when out of nowhere ninjas storm the palace.

They are under the command of Sterling Lam (Robert Wu), a collector of rare artifacts and a rival to Librarian Flynn Carsen (Noah Wyle).  Carsen relishes the chance to go after Lam again, as well as save Shangri-La, for whoever possesses the Staff of Shangri-La at sunset will rule over the kingdom.

His plan is a variation of the Trojan Horse, where Cassandra Cillian and Ezekiel Jones (Lindy Booth and John Kim) will bring in a rare artifact Flynn beat Lam to as a way to sneak himself, Stone, and Guardian Eve Baird (Rebecca Romijn) into the kingdom.  Things go from bad to worse when they find the Monkey King is under a spell that makes him dangerous.  Things oddly don't get better when Eve is captured and Flynn and Stone find Charlene (Jane Curtin), who has been hiding out in Lam's collection to hide her from Apep.

Charlene decides that in order to stop Apep, she must give up her immortality, which angers Flynn.  However, as the First Guardian, she agrees to help in one last mission.  Baird, for her part, is brought to General Rockwell (Vanessa Williams), who gives her some shocking information: Baird is a sleeper agent for DOSA (Department of Statistical Anomalies), which Baird was unaware of. 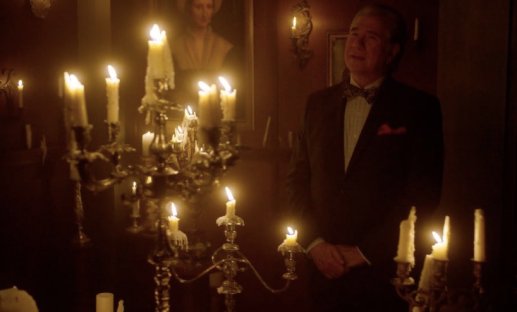 Despite this, Baird will not help DOSA take the Library, insisting the artifacts within it are not used as weapons of mass destruction but there to be protected.  It is a battle to save Shangri-La, especially with Lam's henchwoman (Michelle Lee) firing darts and controlling His Majesty, who in turn fits his protégé Stone.  Ultimately though, things are set right, with the Monkey King even giving Stone a spell, which shocks the vehemently anti-magic Stone.  Charlene goes into another world with the help of Jenkins (John Larroquette), who confesses his love.

Let's start with what I think is And the Fatal Separation's biggest flaw: the revelation of Baird's unwitting aid to DOSA.  For me, I think it robs some of the fun of how Flynn and Baird met way back in the beginning.  Up to a point, I can see why it was done: to tie DOSA to the larger Librarian mythos and give a shocking twist.  However, part of me felt like we lost something we had had for three years, as if some new information was just put there.

In short, something about it just didn't sit right with me.  Part of me wishes that they had tweaked things a bit: for example, kept Rockwell as Baird's mentor, but instead of saying Baird had been essentially placed there by DOSA three years ago to be an unwitting infiltrator, Rockwell had offered Baird a chance to turn double agent.  Then again, that's just my suggestion.

Oddly, this is about the only thing that really displeased me about And the Fatal Separation, because everything else was really a knockout.  We had great moments of comedy (such as when circumstances force Jones to both remain silent and listen as his reputation gets knocked about by Lam, who refers to Jones' 'arrogant accent').   The humor was both broad like that, and subtle (who knew the Monkey King was so fond of smoothies).

There were moments of touching drama.  Jenkins takes Mr. Carsen to the Chamber of Memories, a recently rediscovered room where candles indicate whether someone connected to the Library is still alive.  When Charlene goes to the other side, we see her candle softly flicker out.  Even here, we aren't drowned in sorrow: earlier, Flynn is surprised and displeased that his candle is the smallest of all the other Librarians, with Baird's candle being the biggest and brightest.

There were moments of action.  In fact, I'd argue And the Fatal Separation was probably the most action-oriented episode of The Librarians we've had.  Starting from the duel between Stone and his mentor right down to the various ninja attacks (enhanced by Lam's henchwoman) to rescue of Baird (using a bit of cleverness by Cassandra and Jones) to the rescue of Shangri-La and the final battle with the Monkey King, we had a lot of daring-do.

As mentioned, everyone got one moment to be showcased, something that is difficult when you have just one hour.  Let's get the guest stars first.  Curtin's Charlene was her old sarcastic self (her quip about how their recaps takes up too much time for them to take action was a hoot), Reyes, Jr.'s Monkey King was in turns menacing and humorous, Wu's Lam was all-out evil (which all but calls for another Librarian film where we get to see him and Flynn fight for the Shield of Ankor), and Lee was wickedly fun as the henchwoman (whom I don't remember hearing a name for). Williams too was sharp and menacing as Rockwell, who dismisses the Librarians as a collection made up of a failed academic, a cowboy, a janitor, and a crook.

And the Fatal Separation was as I also mentioned, a showcase for Christian Kane, who I think is really a good number of Librarian fans favorite (in the interest of full disclosure, he's one of the two characters I identify with the most, Flynn being the other).  We pretty much know the gruff-voiced Kane can handle the action, but he also managed the emotion of having to fight someone he genuinely cared for extremely well.

While Kane was the clear center of And the Fatal Separation, the episode managed to also give everyone else their time.  Larroquette's tenderness with Charlene, Kim's comic style when he's forced to just react, Booth's mix of wit and punk-menace, and Wyle's still slightly bumbling but heartbroken Flynn all worked so well that we see how well-acted The Librarians is.

As a side note, when Flynn throws the Staff to Stone to give to the Monkey King, the music was eerily similar to that in Doctor Who.  I find it fitting, given how Flynn is very much like The Doctor: a man who works best with Companions and uses knowledge to defeat his otherworldly enemies.  I'd say The Librarians is better than Doctor Who and it's a pity we can't have the level of wit, humor, and action on the latter that the former has in spades.  Yet I digress.

There were lots of twists and turns in And the Fatal Separation, lots of fun, wit, action, even emotion.  We get lots of foreshadowing (Stone gets magical tattoos, something the fiercely anti-magic Stone doesn't like, and a small candle for our man Flynn). Minus that sleeper agent twist just doesn't sit well with me, And the Fatal Separation is pushing The Librarians to a hopefully epic season finale.

Next Episode: And the Wrath of Chaos
Posted by Rick at 7:41 AM