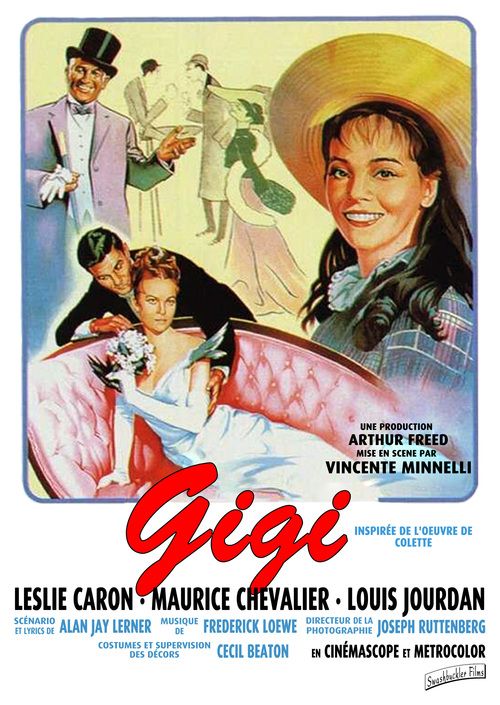 What truly astonishes me about Gigi isn't its elegant confection of color and music, a beautiful concoction of fin-de-siècle wardrobe and morals.  It's the fact that a story about a courtesan could not only be made past the censors, but that it could be considered a delightful, even charming musical comedy.  Did the censors not see that this was a tale of gleeful Gallic infidelity, of cute courtesans, of whores and the men who pay them?  Yet, perhaps because this somewhat sordid tale of unwedded bliss and the training of a nymphet pre-Lolita is couched with such wonderful music by Lerner & Lowe, a lot can be forgiven.  I'm not sure it winning Best Picture is one of those that can be forgiven, but more on that later.

Narrated by bon vivant and elder playboy Honore (Maurice Chevalier), he sings about how we should Thank Heaven For Little Girls (which, I understand, is Roman Polanski's theme song, but I digress).  The focus is on one particular little girl, our title character of Gigi (Leslie Caron).  She's a sweet but uncultured girl, fun-loving but not interested in the lessons in culture and breeding her Grandmama, Madame Alvarez (Hermione Gingold) and her fearsome Aunt Alicia (Isabel Jeans) give.  Unbeknown to her, these lessons are vitally important.

Enter Madame Alvarez's friend and Honore's nephew, Gaston (Louis Jourdan).  He is fond of "Mamita" and of Gigi, in an older brother type of way.  However, the Belle Epoque holds no beauty for him, as the constant whirl of Parisian lovemaking is one he finds A Bore.  He'll go through the motions, even having a mistress, Madame L'Exelmans (Eva Gabor), but he wishes for something true.  He finds that only in the gleeful innocence of Gigi.

Things take a turn for everyone when Gaston dumps his mistress publicly for schtupping on the side with her skating instructor.  She 'commits suicide' (or rather, attempts it), but this is all part of what is expected among the higher echelons of the City of Lights, as is a devil-may-care attitude by Gaston.  He goes through the motions, but he's bored with it all.  Despite whatever good sense he may have, he has Gigi and Mamita come to the sea with him, where he laughs thanks to Gigi's joie de vivre, and Madame Alvarez and Honore have a reunion, where these two old lovers each say how I Remember It Well.

Aunt Alicia is horrified at her sister's clumsiness at allowing Gigi to go with Gaston with no promises to make Gigi his mistress, and now both sisters see that it is best to get Gigi all settled into her life as a courtesan.  Both Gaston and Gigi are not thrilled with this idea, but Gaston finds that he is in love with Gigi, and Gigi finds it hard to be without Gaston, so we will go through the motions.

Gigi's debut as his mistress (minus the sex, which for some reason we don't see) is a smashing success, with Gigi showing all the breeding required to be a great courtesan.  However, when Honore appears at Maxim's with his newest conquest and finds Gaston is with Gigi, his delight (not to mention perhaps the suggestion that Honore might like to take a crack at Gigi himself once Gaston moves on to someone else), is too much for Gaston.  Dragging poor Gigi back to her and Mamita's flat, Gaston asks permission to make Gigi, not his mistress, but his wife. 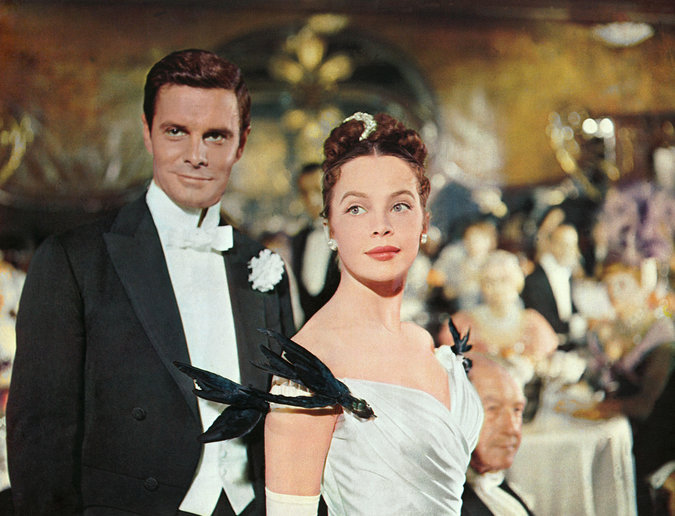 It's pretty incredible, as I said, to imagine that a tale that involves the training of a young woman to be someone's piece of ass can be thought of as a charming film, but it's a credit to two or three principle figures that makes Gigi work at being cute without being almost perverse.

The first is to the songwriting team of Alan Jay Lerner & Frederick Lowe.  Gigi has at least four remarkable songs that expand on characters and are just some of their best work.  For me, their best song in Gigi is the duet between Honore and Madame Alvarez, I Remember It Well.  The back-and-forth between Chevalier and Gingold is lyrically so perfect (Honore's faulty memory to Alvarez's, but both acknowledging their fondness), and musically there is a mix of romance and melancholy.


We met at nine/We met at eight
I was on time/No, you were late
Ah yes, I Remember It Well...

Through the rest of the song, it goes back and forth like this, with Honore's memories not matching Alvarez's.  However, I don't think it's the fact that Honore has the details wrong, but that Alvarez was the one woman he wishes to remember that gets at the listener.  There's a sense of love still there, hazy memory and all.

The second is the joyful The Night They Invented Champagne. The delight and joy in this pure romp expresses not just happiness found in bubbly, but in company (in this case, between Gigi, Gaston, and Alvarez).  A third number, not as well remembered but still one I enjoyed, was Chevalier's solo I'm Glad I'm Not Young Anymore, where we see why Chevalier was so popular: a Gallic gaiety, with his signature dance moves (down to his hat at a jaunty angle).  The last, albeit perhaps the creepiest, is the aforementioned Thank Heaven For Little Girls.  It's a lovely melody, but the thought that a man as old as Honore would be singing about the joys of little girls, perhaps today, comes across as almost pedophilic (unless you're a twelve-year-old who likes to lick the fingers of someone twice your age that you're sexually attracted to).

The other songs were good but not something I figure are up to that level, and that includes the title song.  I could remember some parts of Gigi, but don't understand why that song was singled out when either I Remember It Well or The Night They Invented Champagne were better (and more memorable).  I can remember the melody of Gigi, but not the words, while with the other two, I can remember both.

The second person responsible for making Gigi into a treat and not a bore is director Vincente Minnelli.  Give him credit: he not only knew how to keep things flowing (I hardly noticed how the time flew) but brought great performances out of his cast.  Chevalier was a delight as the rakish Honore, unapologetic about his desires and pursuits, with a wry twinkle in the eye.  Caron was beautiful and enchanting as Gigi, this mixture of innocence and elegance (the transformation from tomboyish figure to sophisticated courtesan breathtaking).  Minnelli also made the world of Gigi just real enough without it being bogged down with too much logic.

As a side note, give credit also to Cecil Beaton, whose costumes and sets made things so much more posh and beautiful.

Finally, the third figure is producer Arthur Freed.  He was the master musical producer at MGM, and Gigi is as lavish and elegant a musical as any in his catalog (which includes another Minnelli directed-Caron acted/danced production, An American in Paris).

Now perhaps we come up with problems.  Gigi suffers a bit from being too similar to yet another musical, My Fair Lady.  Both were written by Lerner & Lowe, and both revolve around a woman being transformed into something else (a Cockney in one, a courtesan in another).  It follows a similar story arc and one wouldn't be blamed for thinking songs from one could have been used in the other (which is not off the mark, since Say A Prayer For Me Tonight, sung by Gigi before going to Maxim's to debut as Gaston's mistress, was meant for My Fair Lady's Eliza Dolittle before going to the ball to debut as Higgins' creation).

As much as Gigi creates this world of dalliances and elegant, almost delightful decadence, I don't get why so much humor was meant to be derived from a failed suicide attempt.  Granted, they mention that she's tried it before (and deliberately failing every time, almost like a ritual to be done to keep the game going).  However, I found that (and Honore's slight lechery) a bit surprising.

Gigi is very pretty, with some wonderful songs and a cheery exterior.  I'm not convinced that it is a great film.  It's entertaining, it's delightful, but a bit shallow, and I figure that's all it set out to be.

One thing, at least for me, is that I'll Remember It Well.