Bates Motel: First You Dream, Then You Die Review 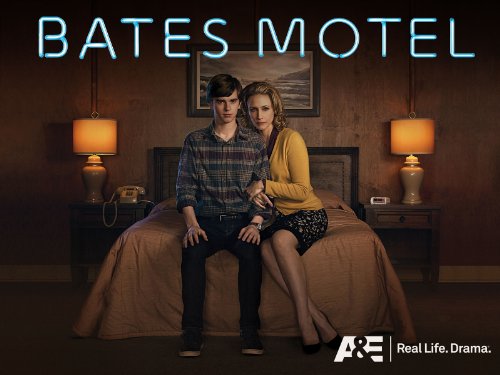 BATES MOTEL:
FIRST YOU DREAM, THEN YOU DIE

The Son Waits While The Mother Bates...

Bates Motel is covering territory that we've seen before.  Ostensibly the story of how Norman Bates went from troubled young man to mass killer, the early years of our favorite Psycho have been covered in Psycho IV: The Beginning (I love how a Part 4 can be "the beginning", but I digress).  Of course, Psycho IV is staying within the film series begun in 1960 and which had two prior sequels (neither of which were envisioned by Hitchcock or anyone else working on that film).

Bates Motel, on the other hand, is less a prequel to the Alfred Hitchcock masterpiece and more both a reboot and reimagining of the Norman Bates story.  It not only shifts the setting from the 1960s to the present day (the reboot phase) but also moves past the Norman Bates story itself to encompass a more general story of small-town depravity of which Norman and his mother soon become entangled in (the reimaginging part).  Its premiere episode, First You Dream, Then You Die, starts Bates Motel off into something related but not connected to Psycho, and with a strong story and some excellent performances, we start this series in excellent fashion.

Norman Bates (Freddie Highmore) is sensitive, a bit shy, but now has the burden of having lost his father (under what I think are mysterious circumstances).  His mother, Norma (Vera Farmiga), moves them to an idyllic seaside town six months later (which the dialogue establishes is something within her character).  Now she's bought a hotel there, hoping to in her words, '"start over", especially away from her other son, Dylan.

While Norman soon gets the local cool girls interested in him (either because they do think the guy is not bad-looking or because they just sense new blood), the original owner of the Seafairer Hotel, Keith Summers (W. Earl Brown) comes around threatening them.  One night, the girls ask Mrs. Bates for permission for Norman to come out and play (ie. go to the library).  While Norman wants to go, she says no, saying she needs lots of help to put their hotel and home in order (which is exactly why she didn't want Norman to join the track team and went out of her way to make him feel guilty when she consented and signed the permission slip).  He, in a rare act of defiance, sneaks out of the house to go, but to his surprise they AREN'T going to the library.  At the party he struggles between his shy nature and his burgeoning sexual desires.

However, it looked like he picked a bad night to leave.  Norma is stunned to find a drunk, rage-filled Keith at her kitchen.  She calls for her son and valiantly defends herself, but Keith overpowers her and violently begins to rape her when FINALLY Norman beats him.  At first, it looks like everything will return to normalcy, but when Keith makes a provocative statement Norma in a rage stabs him.  Norman returns, horrified at the sight.  Determined to avoid scandal, she has her son help her dump the body in a hotel room tub while they figure out what to do.  Even though it's the middle of the night, she has Norman start tearing out the carpets to cover up her tearing out the blood-stained carpet.  While tearing out the carpeting in one of the rooms, Norman discovers a notebook with hand-drawn pornography.

To their surprise, the law appears.  While Deputy Zach Shelby (Mike Vogel) is clearly attracted to the Widow Bates, Sheriff Alex Romero (Nestor Carbonell), is not.  Eventually, they do leave.  The next night, the Bateses go and dump the body in the lake.  First You Dream, Then You Die appears to end on some optimist note, with the Bates Motel sign going up and a proposed byway that would have skipped the hotel not going through for now, but we find that something isn't right.  By the flicker of the neon lights, a woman with various needle marks is being re-injected, all while being chained-up...

Bates Motel borrows elements from another television series about small-town weirdness and strange goings-on.  It draws heavily from Twin Peaks, and the influence the short-lived David Lynch series is clear in our first episode: from the moody cinematography (for example at the teenage wasteland party and the closing shots) to the sense of dread hanging over what is suppose to be a nice town, right down to Emma Decody (Olivia Cooke), a girl with cystic fibrosis (at least that's what I understood to be the "C.F." she said she had) who could have been the Log Lady's niece.  Right now First You Dream is establishing the scenario and the setting, and the script by Kerry Ehrin and Anthony Cipriano (from a story by Ehrin, Cipriano, and showrunner Carlton Cuse) all have set the mood and characters excellently.

The screenplay is helped by the brilliant performances by Farmiga and Highmore.  Farmiga's Mother Bates is believable in both how she appears to be truly hopeful that she will be able to start afresh as well in how she is able to bully and manipulate her son.  The conversation in the kitchen when a hesitant but hopeful Norman asks for her to sign the permission to join track plays like something from real life.  The son wanting something but the mother, in the belief that her needs (which she sees and frames as the family's needs) come first but ultimately giving in (and making her son feel guilty about it) would be recognized in many homes.  She doesn't appear to be evil, but one who has grown both highly dependent and controlling of her son (always for his own good, of course).  Farmiga's Norma Bates is a mixture of love and abuse (emotional and mental, not physical), one who sees Norman as HER son, with no identity of his own.  Her actions and reactions to everything, from her attack to her cover-up, are believable though not always right, but at least understandable (mostly).

Highmore is equally excellent as the put-upon son, one who has been trained to confuse obedience for loyalty.  He personifies the shy, awkward teen who wants to be good but who has been browbeaten into being unsure of himself.  The sexual yearnings he has at 17 struggle with a sense of right & wrong which are coming into conflict.  Moreover, as someone with an unsteady background, Norman tries to make sense of things and at times coming up short.  With his thin frame and hesitant delivery, Highmore captures the struggle between being good and being loyal.  To his credit his British accent isn't obvious, and his performance is that of a kid who finds himself slipping into things he doesn't want to do and be.

The rest of the cast is slowly coming into form.  Since the first episode of Bates Motel centers more on the Bateses they don't have much time to establish their own identities, but both Vogel and Carbonell do much with their silences and glances to establish that the former is quick to be drawn to the attractive Widow Bates while the latter is more suspicious of the newcomers.

The direction of Tucker Gates mixes the macabre with the comic.  There is something both tense and amusing when Sheriff Romero asks to use the same restroom where Keith's body is stuffed.  The tension between the knowing Bates mother and son and the unwitting Shelby and Romero is intense, but seeing how something so mundane as going to the toilet can be a source of tenseness (a word of my own creation) is almost funny.

First You Dream, Then You Die establishes the series and characters excellently, turning Bates Motel into a gothic horror story (dare I say, an American horror story) with offbeat characters and continuing storylines where Norman and Norma Bates (and their actions and being) are just an added piece to a strange world where their antics are just down-home regular folk behavior.

Next Episode: Nice Town You Picked, Norma
Posted by Rick at 9:08 AM