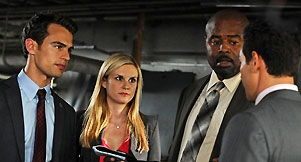 GOLDEN BOY: THE PRICE OF REVENGE

On our second episode of Golden Boy, Police Commissioner Walter Clark (Theo James) reflects on the importance of confidential informers.  He does so by surreptitiously attending an informer's funeral, then flashing back to the first informer he knew and how that case went.  The Price of Revenge is like the pilot, more character-driven than mystery-driven, though this is more a plus than a minus.  It sets up future stories while going further into how the title character continues to grow as both a detective and a person.

Detective Clark apprehends Natasha Radkovich (Stephanie Brait), a petty thief who tells Clark and his senior partner Owen (Chi McBride) that if she tells them where a body is they could cut her a deal.  Clark and Owen find the body of a woman who is identified as being missing...as is her daughter Abigail.  The woman's sister Tara (Samantha Buck) tells the investigators that her sister had been clean for some time but that her niece's baby daddy was bad news.

Meanwhile, Detective Arroyo (Kevin Alejandro) suspects that Natasha is not telling all he knows.  Partially because Clark now irritates him, partially because a child is missing, he literally beats it out of her, despite her pleas to talk to The Eyebrows (that would be Clark).  Natasha won't say anything about Arroyo's abuse but Clark can see it in her face (literally).  Still, there is no proof.  Abigail (Nicollet Pierinni) is indeed rescued, and the culprit, a highly troubled cab driver named Frank (Robbie Sublett) who had a sideline as a pimp, is taken in.

The Price of Revenge ends with our discovery that Arroyo got Natasha to get Clark to give her some money which may or may not have been evidence to help her get out of town (which he secretly recorded).  Sadly, the future Commissioner Clark places a rose on her grave, making it clear that she died shortly after the events of the story.

We do have something of a subplot: Walter's sister Agnes (Stella Maeve) is now starting to show positive signs of improving her life with her new waittressing job.  In fact, Owen is impressed that Clark pays fellow officers to frequent the cafe and order donuts and coffee from the new girl.

The Price of Revenge is centered again on the growing conflict between Clark and Arroyo.  It's clear that Nicholas Wooton's scripts are heading towards how the dynamics between the young upstart and the reigning detective will play out over the season.  Given that we know that he will grow up to be Commissioner Clark, I don't half-fancy Detective Arroyo's chances.  However, a major positive in Price of Revenge is that Arroyo is given a more complex persona.  He does a bad thing (beating a witness) but we see that he is motivated more by fears for the little girl than his growing antipathy towards Clark.  We also see the dynamic between Arroyo and his partner, McKenzie (Bonnie Summerville), which may be more intimate than perhaps acceptable.

We also get a hint of things to come with Assistant District Attorney O'Connor (Odette Annabelle).  It's obvious Clark is instantly attracted to her (even though she instantly isn't).  Knowing what we know with the quick flash-forwards (and the fact that Theo James is breathtakingly beautiful enough to have deflowered Lady Mary Grantham, whose passions caused him to drop dead in her bed), I don't half-fancy O'Connor's chances of resisting Pamuk...I mean, Clark's charms either.

The guest stars were a highlight for me.  Brait's petty crook elicited sympathy as the girl who came to the Big City and found it wanting, fearful of police but wanting to trust.  Pierinni had a small role as the little girl Abigail, but seeing her sadness on realizing her troubled mother was indeed dead was genuinely sad.

The Price of Revenge is still, however, geared more for the interactions between the officers than the actual mystery.  The growing rage within Arroyo, the growing antagonism Clark has towards Arroyo, the determination of Clark's senior partner Owen to keep him from going off the handle: all those are the things that are the focus of Golden Boy.  In this case, it becomes a dramatic version of The Office in the politics and rivalries between officers, but the drama between the characters is what keeps viewer's interest, with the mystery being just a way to get them to work.

So far, I've enjoyed the two episodes of Golden Boy, not for the crimes being investigated or even in the back-story of Clark's rise to power.  Rather, it is in how the interplay between co-workers is captured so well, something that is relate-able to audiences who have dealt with difficult co-workers in various points in their lives.

In short, The Price of Revenge is well-written and acted, but again I wonder if the opening ("In seven years, Detective Walter Clark will become the youngest Police Commissioner in the history of New York City.  This is his story") will be the only thing left to remind us that these are all basically Commissioner Clark's remembrances.   Whether there will be a greater focus on the crimes I do not know (I suspect not), but Golden Boy is slowly starting to give greater focus to how people may start undercutting others for their own reasons, and in how one should react: do as their rivals do, or do the reverse to keep their humanity.

Next Episode: Young Guns
Posted by Rick at 1:22 AM