Doctor Who Story 008: The Reign of Terror 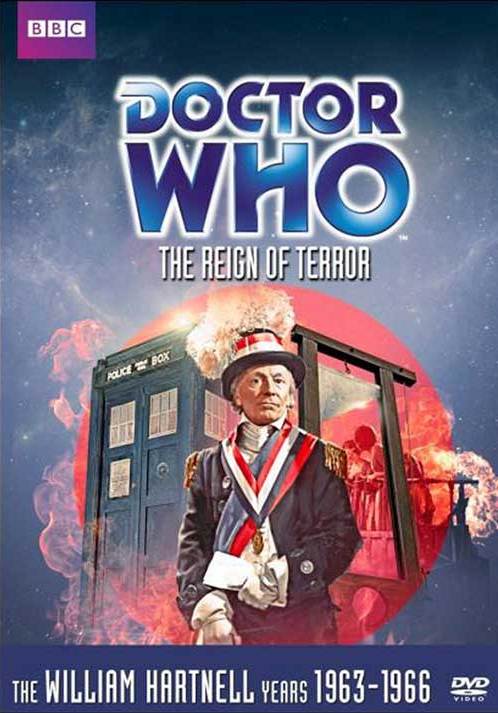 STORY 008: THE REIGN OF TERROR

The six-part First Doctor story collectively known as The Reign of Terror is yet another of the 'lost' stories, with two episodes missing.  Through the magic of animation reconstruction, we now have as close to a complete restoration as possible should the episodes never be found.  It is also a historical story, and with the collective title of The Reign of Terror we can guess it takes place during the chaotic post-French Revolution period.  We learn that the French Revolution and the succeeding period is the Doctor's favorite period in Earth's history, though one wonders why a pacifist would enjoy a period a particularly bloody period.  While The Reign of Terror suffers from an excess in length and appears to be taking its cue from other stories (more on that later), it is on the whole less an adventure story and more a history lesson through the six episodes: A Land of Fear, Guests of Madame Guillotine, A Change of Identity, The Tyrant of France, A Bargain of Necessity, and Prisoners of the Consiergerie.

The Doctor (William Hartnell) is in as especially cross mood.  His Companions Barbara Wright (Jacqueline Hill) and Ian Chesterton (William Russell) want to go back to their own time.  With a mixture of anger and hidden sadness he drops them off at what he thinks is 1963 England.  As is the ways of Doctor Who, he is mistaken: he lands them in France, specifically mid-July 1794 at the end of the rule of Maximilien Robespierre.

He needn't have bothered.  While Ian is separated from the women, their route to the execution is interrupted by a secret group that rescues those sent to the guillotine.  Their rescuers, Jules (Donald Morsley) and Jean (Roy Herrick), suspect that there is a double agent within their ranks.  Also aiding them is the handsome and charming Leon (Edward Brayshaw), who has smitten and been smitten by Barbara.  Susan, however, has taken ill, and after a dangerous visit to a physician, they are recaptured and sent back to the Conciergerie Prison.

The Doctor, meanwhile, has infiltrated the Conciergerie, pretending he is a high provincial official of the Revolution.  The Jailer (Jack Cunningham) is constantly puzzled by this official, while the prison official and Revolutionary leader Lemaitre (James Cairncross) suspects there is something peculiar about this garishly-dressed officer.  It also doesn't help that he thinks Ian knows something about an espionage ring that is working with the British.  Ian, having overheard a dying prisoner, escapes and now has two goals: to find Susan and Barbara, and deliver a message to the mysterious James Stirling.

Eventually the Doctor and his Companions are reunited, Barbara and Ian arrange a secret meeting where some Corsican general is offered one of three consul positions in a new French government, James Stirling's identity is exposed and Robespierre fell, bringing an end the Reign of Terror. The Reign of Terror is at heart, a good idea for a story, but it has some flaws.  One big flaw is its length: at six episodes is it two episodes too long.  We go through a lot without actually having the cast be participants in either affecting or altering history be it major or minuscule.  Instead, they were just carried into events, always reacting to things but not impacting them.

Second, Dennis Spooner's story appears to be drawing inspiration (consciously or not) from The Scarlet Pimpernel.  We have a British agent working during the French Revolution who is involved in rescuing people from the guillotine while maintaining a secret identity.  Furthermore, we don't have any specific reason as to why Jean and Jules rescue Barbara and Susan in particular (other than they just happen to be in a passing tumbrel).  Part of me would have liked to have seen a little more humor without flashing back to the Looney Tunes' The Scarlet Pumpernickel.

The entire subplot of Ian's involvement with British spies seems to be there just to A.) lengthen the story and B.) give Ian something to do.  Most of the non-Doctor action involves Susan and Barbara: attempting to escape prison, attempting to stay alive and find both Ian and the Doctor.

Moreover, Ford's Susan proves herself to be shockingly annoying.  One appreciates that she has become violently ill during her time in prison (although to be frank, this whole 'Susan is getting in the way' business is slowly starting to get a bit tiresome), but even as she grows weaker and weaker (only to have a great recovery before the story ends), her whining and complaining about things slowly starts getting on our nerves.   It almost seems that most of the story is there, without the main cast having to do things to either get into or out of their situations.

One thing that was amusing (perhaps unintentionally, perhaps not) was the Doctor's wardrobe.  With his mass of feathers in his cap, it seemed that we can never fully take his get-up seriously.  Granted, it was done to get into the prison, but at times it does prove almost hilarious to see him constantly strut around like an unhinged peacock.  We also have an extended sequence in Episode Two: Guests of Madame Guillotine where the Doctor is put to manual labor which seems to just stretch the story.

Finally, for a story that is set in the Doctor's favorite era in human history (again, though we don't know why this particular time period is his favorite...I would have thought the Renaissance, or the Enlightenment, or even the Era of Good Feelings), he doesn't seem to either know much or show any particular fascination of being within that time frame.  He never stops to marvel that he is rubbing shoulders with Robespierre (who at least is seen as a loon).

However, The Reign of Terror has some wonderful things buried within this lost story.  Cunningham is in turns comic and menacing as the Jailer.  With equal ability he can be flustered, even flummoxed by the Doctor's mind games and suggest that he will take advantage of Barbara.   The identity of James Stirling does come as a true and unexpected shock.  We also have some of best examples of how Hartnell's Doctor is brilliant in how he is able to outwit his enemies rather than by using force.  How he manages to deceive the Jailer and Lemaitre, then use his backfired plan against the Jailer shows he is simply on a higher intellectual level.

One positive aspect is the conflict between Ian and Barbara after Leon the traitor is killed.  While Ian sees things as black-and-white (Leon was evil, he had to be killed), Barbara sees things in shades of grey (perhaps fifty given how she appears to like Leon).  She comments that Leon saw himself as a patriot, not as a villain.  In his perspective, Leon was working for the good guys and Jules and Jean were the bad guys.  It's unfortunate that the suggesting of attraction between Leon and Barbara stumps her argument, it does show that Doctor Who was willing to explore ideas about good and evil.  Unfortunately, this fascinating discussion was dropped pretty quickly but the fact it was introduced at all was a positive step.

Finally, the end of Episode Six has a simply wonderful closing scene with beautiful dialogue.  Having perhaps accepted that the four must keep wandering through time and space together a little bit longer, the Doctor muses, "Our lives are important, at least to us.  But as we see, so we learn."  Ian asks, "And what are we going to see and learn next, Doctor?"  The Time Lord replies, "Well, unlike the old adage, my boy, our destiny is in the stars, so let's go out and search for it."  We now see the chief strength of Doctor Who: limitless possibilities in terms of story.

As far as the animation for the lost episodes (Episodes Four and Five: The Tyrant of France and A Bargain of Necessity) this is the second time we've had a reconstruction through animation.  The Invasion, the lost Second Doctor story, was brought to life through the work of Cosgrove Hall.  The Reign of Terror's animation is brought by Theta Sigma, and the styles of animation are clearly evident.  It might not be unfair to compare the two works, and I'm willing to acknowledge that perhaps seeing The Invasion first I am prejudiced towards that style of animation.

For myself, the animated episodes looked garish and surprisingly nonhuman.  I recognize that animation sometimes looks unreal, but with the two missing episodes I felt there was too much focus on the art and less on the human aspect.  In short, the animation drew a bit too much attention to itself in my view and less on the story.  While I got lost in the story of The Invasion and gave the animation not much thought (seeing it flow naturally in the story), The Reign of Terror didn't seem too concerned to make things look more natural.

On the whole, The Reign of Terror is a long but straightforward historic piece.  It isn't terrible but it has one or two flaws (particularly the length) to make it among the greats.  Still, on the whole mildly entertaining but nothing to lose our heads over.

Next Story: Planet of Giants
Posted by Rick at 6:22 PM