Jazz On A Summer's Day: A Review 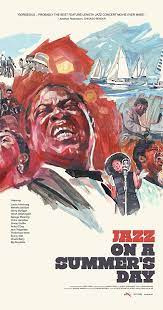 JAZZ ON A SUMMER'S DAY
What Music They Made...

My musical tastes run the gamut from The Smiths to George Strait to Renée Fleming to Michael W. Smith to Bob Dylan to Cusco to Ella Fitzgerald to John Lee Hooker to R.E.M. to the Kronos Quartet to The Supremes to Pitbull to Vangelis to Sade to Kenny Rogers to R. Carlos Nakai to Skillet to New Order...well, you get the idea.  As someone who loves music, I went into Jazz on a Summer's Day curious but not too familiar with jazz music itself.  The film is not strictly speaking a concert film because we get images of the America's Cup trials also taking place in Newport, Rhode Island at the same time.  It is closer to a documentary since we not only have no narration but also actual documentation of the performances rather than stating a point of view.  However you label it, Jazz on a Summer's Day is an extraordinary film, featuring some legendary performances that would make anyone fall in love with this distinctly American art form and see that above all else, good music is something to be enjoyed for its own sake.

Chronicling one day at the 1958 Newport Jazz Festival, Jazz on a Summer's Day directed by photographer Bert Stein in his only film showcases singers both well-known and more obscure to today's audiences at the top of their form.  More important at least to me, we see that for both participants and audiences, music was something to enjoy.  It's clear that those on the stage and those listening are A.) there for a good time, and B.) having a good time.

The performances are a mix of all sorts, interlaced with footage of young jazz enthusiasts playing at a home (or in a car, even dancing on a roof).   We also cut to reactions of the audiences, and Jazz on a Summer's Day might be a little jarring since we see them in suits, ties, dresses, amazingly well-dressed for a day-long concert in the outdoors.  However, given this is how they actually showed up (as opposed to the t-shirt/ripped jeans that are seen as the traditional concert uniform today), Jazz on a Summer's Day makes the audience look cool in their stylish casual wear.

Let us now focus on the performances.  We start with jazz legend Thelonious Monk, moving on to the George Kelly Quintet, Dinah Washington, and Gerry Mulligan Quartet who are more traditional jazz.  Jazz on a Summer's Day however, doesn't just stay within the jazz world.  We also get a little hard blues with Miss Maybelle, some highly experimental jazz with the Chico Hamilton Quintet and even a little early rock-and-roll with Chuck Berry.

If I may digress a bit, Jazz on a Summer's Day shows that at this point in time, people followed Louis Armstrong's adage that there were only two kinds of music: good music and bad music.  In any other venue (say, a Woodstock or Warped Tour or Lollapalooza) it would be almost inconceivable to have a jazz performer or a classical guitarist take a stage in the same venue as a Green Day or Sparta.  Christopher Parkening will never jam with David Guetta, who might never perform with Enya, let alone appear on the same bill.  However, back in 1958, there wasn't that large a division between genres.  Blues, early rock-and-roll, and even avant-garde jazz all worked with more traditional sounds, which makes the collection of artists in Jazz on a Summer's Day such an astounding document.

For myself, the highlight of Jazz on a Summer's Day is the extraordinary Anita O'Day, who is the second performer in the film.  Her rendition of Sweet Georgia Brown is simply amazing.  O'Day has a great sense of class, so stylishly dressed and the talent to back up her joy and a hint of swagger when performing.  It's clear that she loves the music, and her delivery and phrasing makes another song she performs, Tea For Two, into a fast and smooth version rather than the usual rendition of the song as something small and cute.  Everyone is having a good time: O'Day, her band, her audience, and the joy comes through.

Speaking of Satchmo, Armstrong himself performs to a delighted audience, and his set is simply fantastic all the way.

However, I would be remiss to not point out that the film also has some remarkably contemplative moments.  Between the O'Day and George Kelly Quintet set we get a little Bach on the cello, which makes both the images and the sound more beautiful.  We also have contemplation with the final act, introduced in the most beautiful way possible.

"It is Sunday, and it is time for the world's greatest Gospel singer: Miss Mahalia Jackson."

Sister Mahalia brings a little church to Newport, bringing the joy of salvation and having people dance (if perhaps not in the Spirit) with Didn't It Rain.  Just before she closes her set, she almost sheepishly tells them, "You make me feel like a star," showing a deep humility at her enthusiastic response.  Jackson rarely ventured into secular music, making her appearance at a jazz festival all the more special.

She however, stayed true to her gospel roots, closing out her set and Jazz on a Summer's Day with The Lord's Prayer, sung in a beautiful, haunting, and respectful way that makes it a true prayer in song.  The audience is rapt in attention, even some mouthing the words.  I can't think of a better way to close this most extraordinary and beautiful film.

Jazz on a Summer's Day is simply the greatest concert film ever made (apologies to Woodstock, The Last Waltz, and Monterrey Pop).  It has a cool, relaxed atmosphere where performer and audience were professional and more importantly, just having a good time.  The music is beautiful, relaxed, and one where the joy of music pours out.  For myself, let them continue playing All That Jazz...