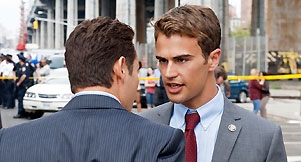 And in our fourth episode of Golden Boy, the mysteries continue and deepen.  Will our 'golden boy', Detective William Clark (Theo James) rise through honest work in the footsteps of his senior partner Owen (Chi McBride) or through duplicitous machinations, outdoing his nemesis Detective Arroyo (Kevin Alejandro)?  Role Models, which is easing its way to being a traditional CBS procedural with little nods to the future, put some work into the mystery-of-the-week, but it also gave Arroyo something we haven't seen either with him or much with Clark: a moral crisis that reveals him to be more complicated than our traditional 'villain'.  In fact, given how Clark is being painted in light grays (perhaps not as clean-cut as we would like our heroes to be but still closer to the angels), Role Models actually gives a greater focus, even sympathy, to Arroyo to where he is making Golden Boy about him than Clark.

In the future, we see Clark playing chess with disgraced former Commissioner Dowdell (William Sadler), currently residing in prison.  Now we go back to the case when first their paths crossed.  A police officer, Detective Novak, has been shot under the bridge (why do I have Red Hot Chili Peppers playing in my head) while working as security for a rap mogul.  Said rap mogul, one Kyle Burton (Jermel Howard) is first thought to be the target.  However, we find this is not the case.

Arroyo is particularly concerned for several reasons.  One: the Commissioner is looking into this personally, and as someone with ambitions of his own Arroyo doesn't want to be caught flat-footed.  Two: the dead detective was the old partner to Arroyo's mentor, Lieutenant Madrid (Nick Chinlund).  Three: the dead guy is a cop, and that to him means they pour everything into the investigation.

Owen, while not happy about a fellow cop getting gunned down, isn't as concerned about what either the Commissioner thinks or in Novak's posthumous reputation.  Owen and Madrid have their own rather bitter history between them (which begs the question, 'Does Detective Owen get on with ANYONE or does he always end up feuding with every officer he meets?').  Owen soon wonders how Novak could afford so many luxuries on his salary.

Obvious answer: Novak was dirty.  While Owen and Clark see that clearly, and that Madrid is also dirty, Madrid's buddy Arroyo either can't or won't believe that.  He now is in a terrible dilemma: Arroyo, with all his flaws, is a good cop, but he finds it difficult to believe and accept that one of his own, particularly the one he learned all the tricks of the trade, could both be corrupt and have killed a fellow officer.  Arroyo confronts Madrid, and with this an angry Arroyo hands the evidence over to Owen and Clark.

The Commissioner asks Clark to massage the final report so as to not taint Novak too much: allow his widow to collect his pension.  At a benefit for the slain brother of Arroyo's "partner" McKenzie (Bonnie Sumerville), who was also a cop, Owen is taken by surprise twice: first that Arroyo and Clark appear to reach an entente cordiale (neither will tell on the other), and that Novak is held to be a hero.  Clark, who has had a touch too much to drink, is taken home by McKenzie.  While there, she and his sister Agnes (Stella Maeve) have a little girl-talk, but Clark tells McKenzie that Arroyo doesn't deserve her.  We go back to the future, where the current and former Commissioners end their chess match.

It is curious that Brett Mahoney's script for Role Models centers more on Arroyo than on Clark.  Throughout this episode the story about how Arroyo handles this emotional crisis.  Think on it: to Clark, Madrid is a warning of some kind.  He is either a warning of what he might become or of what not to do.  For Arroyo, however, Madrid is a mentor and friend, someone he looked up to and emulated to a point.  Coming to discover that his mentor and friend has violated the codes Arroyo has about looking out for fellow officers and not being shady must have been brutal.  Arroyo is not a likeable person in that he is the antagonist to our 'hero', and he himself has done unethical things (sleeping around on his still-hot and nice wife, slapping someone in custody, letting his ego get in the way of dealing with others) but Arroyo is also a shrewd officer who pursues cases to the end and has results to back up his ideas about his effectiveness.

As Golden Boy continues, I find Arroyo to be the more compelling character because he is the more complex.  He is arrogant, self-centered, but he's also effective and at heart a good cop (if not a good man).  Clark, on the other hand, is shifting between being closer to Arroyo's brand of egocentric bully and Owen's honest and methodical officer.  Owen would never have parlayed an advantage to benefit either himself or someone else.  Clark does.

In terms of the mystery, I think it was pretty clear from the get-go where it was going.  Even highly-paid officers like Novak (who had to take a sideline with a rap superstar) couldn't afford all the luxuries he had.  Again, it was not the mystery that is the important issue in Golden Boy: it is the interworkings of the cast, in particular the Arroyo/Clark/Owen triangle.

It is a credit to all three of the actors (Alejandro, James, and McBride) are all able to play their parts so well: the Ego, the Moral Center, and the one in between.

Again, we can figure that Clark has survived any and all plans against him and that whatever he's done he has managed to either get past it or hidden it.  I think it was the Commissioner (guest star Sadler, who was appropriately sleazy) who said to Clark, "You're either going places or going to jail."  That is what is carrying the show.  Each case brings him (and us) closer to finding out what kind of person Commissioner William Clark is going to turn out to be.  All the future sequences don't give us any solid information as to whether Clark is corrupt or harsh or brutal or if he's honest, straightforward and considerate.  Golden Boy right now is shaping him into who he will end up being, and so long as they can keep the audience guessing, I figure it will do all right.

Next Episode: Vicious Cycle
Posted by Rick at 8:35 AM