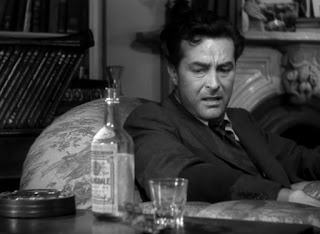 We now recognize alcoholism as an illness, one requiring treatment.  This was not always the case.  Boozing was (and I'd argue, in certain circles, still is) seen as a personal weakness, a failure of character rather than a chemical dependency.  The Lost Weekend, coming when it did, doesn't shy away from showing us the dark and ugly side of alcoholism, putting the idea of the happy, jovial drunk to rest.  Instead, we get an ugly portrait of a man completely devastated by his inability to stop drinking.

Don Birman (Ray Milland) has been ten days sober.  His brother Wick (Phillip Terry) and his longtime girlfriend Helen St. James (Jane Wyman) have been seeing him through this period, the latest in a long string of wet and dry periods for our talented but deeply insecure and struggling writer.  Despite himself, Don simply has little to no control over his addiction to alcohol.  A fortuitous turn of events gets Wick and Helen out of the apartment Don shares with Wick, and Don then finds the money Wick has put aside to pay the cleaning lady.  From that lowly ten dollars and the minders out of the way, Don can now indulge his passion for the sauce to his liver's content...

Over the next four days, Don descends into a downward spiral of buying and consuming alcohol, occasionally stopping by his favorite haunt, Nat's, where he tells the barkeep named Nat (Howard DaSilva) about how he first met Helen.  It was at the opera, and in a drinking scene all he could focus on was the bottle he'd hidden in his coat.  Desperate to get it back, he goes to the coat check but was given the wrong ticket.  Therefore, he has to wait until the owner of the right ticket comes to retrieve their coat...and that was Helen.

Helen continues to wait and search for Don, while Wick has tired of helping his brother out.  The drinking continues, but there is no merriment.  Instead, he becomes more and more desperate: he steals money from a stranger's purse to pay his bill but is caught, he tries to pawn his typewriter to get cash without realizing all the pawn shops are closed for Yom Kippur (including the non-Jewish ones, a Gentleman's Agreement where the Irish won't open on the Day of Atonement if the Jews don't open on St. Patrick's Day), until he finally ends up in the alcoholic ward of a hospital.  There, the attendant Bim (Frank Faylen) is cynical that Don isn't like all the others in the ward.  "Delirium is a disease of the night", Bim tells Don.  Don doesn't believe him but soon is awakened to the awful screams of those undergoing detox.

In the chaos, however, Don manages a daring escape.  Even after Helen finds him holed up in his apartment (where he does start seeing things) he won't stop.  He sneaks away to pawn her coat, the same one that brought them together, but instead of money for booze, it's for his gun.  Helen finds out and attempts to talk him out of it by telling him the story he's told about the Two Dons: Don the Writer and Don the Drunk, urging him to let the former defeat the latter.

In the end, Don decides to return to the novel he had started, The Bottle, and he will recount his harrowing descent into darkness, to help all those in the naked city suffering silently just like him. 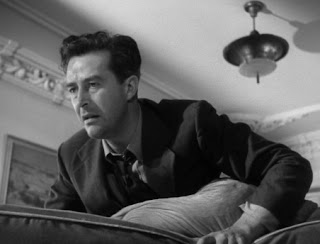 Drinking has been played for laughs for a long time (case in point, The Hangover), but The Lost Weekend shows the dark side.  It is because The Lost Weekend isn't about drinking, it's about addiction.  Don is not the happy drunk; he is an alcoholic, someone who has a powerful addiction to alcohol that has not found a way out of his dilemma.

The Lost Weekend in that respect was extraordinarily progressive in that it treated alcoholism as a disease, not a character flaw.  Throughout the film we don't see Don as anything other than someone whose drinking is in part a mix of chemical dependence and a reaction against his perceived failure.  In one tough scene he seems to start out all right when he meets Helen, but the fear of meeting her parents, of not living up to their expectations (which increase when he accidentally overhears them at the hotel) trigger another fall of the wagon.

Billy Wilder, who adapted Charles R. Johnson's novel with Charles Brackett, not only directed the actors to excellent performances, but added what I thought were slightly wicked moments of humor.  In the opera scene, the singers and dancers turned into a parade of coats for Don, with the bottle being prominent in silhouette (as if putting out all that champagne in the opera scene wasn't already rather bad).  This might be due to Wilder's cynicism and dark humor, but we also get moments where the agony of Don's crisis is played for tragedy.  Earlier, Don had hidden a bottle inside the ceiling lamp, but by the time he gets back to his apartment he's forgotten where he left the extra bottle or that he even HAS an extra bottle.  He turns the light on in his vain search for more alcohol, and we the audience can see the reflection and remember where it is, but Wilder toys with both Don and the audience.  There may be people who would want to yell it, "It's right above you," but then we would be enabling.

At the heart of what makes The Lost Weekend work is Ray Milland's performance.  We never see Don as a bad man.  On the contrary, sometimes he can be quite charming, even witty.  However, we feel his sense of agony and self-loathing as he attempts desperately to get more cash to feed his addiction.  Milland carries The Lost Weekend, and in the mix of addict and artist he carries his performance off well.

It is however, with Terry and Wyman that I wondered whether they didn't see they were enablers (or perhaps the word wasn't in vogue at the time).  Their characters at times were preachy and slightly dim respectively.  I wondered why Helen, knowing all she knows, appears to never stop to think that Don might return to his apartment.  It's been three years of seeing him go on and off the wagon, yet she still stays with him.  I just couldn't wrap my head around why she stuck through all his antics.  I also didn't understand why Wick seemed so eager to cover up for him only to now, at this point, when he's disappeared, just abandon him and wash his hands of his older brother.  I also never understood why Wick simply didn't go to Nat and/or other bars and tell them, "My brother's a drunk.  Don't serve him."  The neighborhood knew Don drank too much, so this was a puzzle to me.

One thing that was fascinating about The Lost Weekend was Miklos Rosza's score, which featured the theremin.  Normally, one associates the instrument with science-fiction films, but Rosza used it to give it the appropriately spooky sound whenever Don was confronted with alcohol.  It lends the movie a darker tone to an already dark story.

If I were to find fault with The Lost Weekend, it is in both the quick, upbeat ending and what today might appear a somewhat heavy-handed view of alcoholism, painting it in perhaps too bleak colors.  Knowing what we know now about chemical dependency, The Lost Weekend may have lost some of the impact it did when it first premiered, but it is still a fine portrait of one man plunging into utter chaos who does manage (perhaps too quickly) to emerge back into the light of sobriety.

The Lost Weekend doesn't attempt to put a gloss over Don's descent until the end, when we get a quick if-not-happy ending a more upbeat one that gives us some sense of hope.  I imagine that audiences needed some sense that in the end things would turn out all right.  A dark ending might have been too much for people, having already seen Don fall so spectacularly.  This quick and more positive ending doesn't run the film, but it does seem to end it on an off-note.

We raise a (non-alcoholic) glass to the intelligence and forward-thinking of The Lost Weekend.

1945 Best Picture Winner: The Best Years of Our Lives