Jiro Dreams of Sushi: A Review 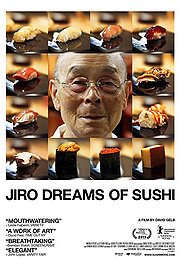 I've had sushi only once, and I thought it was quite good.  However, it would all pale next to the sushi Jiro Ona, the subject of Jiro Dreams of Sushi, makes.  The way people in the documentary speak of both Jiro and his sushi one might think it is a divine experience.   For the actual subject of the film, it is really all in the lifetime's work.  Jiro Dreams of Sushi is not about raw fish.  It is about the search for perfection through total devotion to one's craft, an elegant pursuit of doing one's best work, even at something as perhaps as 'insignificant' as making sushi.

At 85 years of age, Jiro Ona continues to work at his restaurant, located in the basement of a non-descript Tokyo building.  Within its walls though, is a veritable treasure trove of extraordinary craftsmanship.  We spend time with Jiro and his older son Yoshikazu, who will inherit his father's restaurant...as well as his father's legacy as the Citizen Kane of sushi makers.  Jiro's younger son has opened his own place, one that is a mirror image of Jiro's place.  As the film continues, we see that for Jiro, the work is everything.  "You have to fall in love with your work," he tells us, and for the hour-and-a-half that we see him and his staff (which train with him for ten years) work, we get the portrait of a man who puts his energies to making the perfect sushi.  Jiro is not insane or cruel, but he is constantly seeking perfection from those around him (which he asks of himself).   His mode of teaching and serving is one of utmost respect to everyone, and he doesn't dwell much if at all on the past, barely hinting that he can understand that his two sons would have wondered who that strange man sleeping in their house was on his rare days off.

Jiro Dreams of Sushi is a simply engrossing film.  As David Gelb's feature rolls on, we get an image of someone who has devoted his life to creating something beautiful, who takes great pride in his work, and who is guided by a set of ideas that should serve as a model for industry.  Jiro seeks perfection, not money.  He provides training and constructive criticism not to belittle but to improve the work.  He seeks perfection, not glory.

He continues to learn while keeping to the same routine.  Jiro is in some ways a throwback to an earlier time where devotion to one's craft was admirable, and who doesn't deviate from doing the same thing (for example, he takes the same train to work, even sitting on the same side).  However, Jiro is not stuck in the past.  Instead, he continues to experiment in order to improve.  Innovation blended with tradition is what has made Jiro Ona one of the most respected culinary figures in the world.  He could easily have made millions going on a mass marketing blitz.  Instead, he has remained at that same underground post, not moving in location but only in innovation.

Jiro also does two things that are a rarity in today's world.  One, he has a sense that the continued seeking of profits is self-defeating.  Business, he insists, should balance profits with preserving natural resources.  He sees what neither business or environmental groups do: that it cannot be one or the other, but both.  Overfishing will be the ruin of the sushi industry in terms of quality and quantity.  He is fully aware of the importance of both having a healthy fish stock (which should please the ecological group) but that fish must be harvested (which is what business would argue).

Second, he also trusts his staff.  Near the end of Jiro Dreams of Sushi, he comments that 95% of the work is basically done by the time he gets to it.  After ten years of training, where the staff that stays with him (including his son) repeats something again and again until it is just right, Jiro can be assured that when he takes over it will be done to his specifications.  He sees his job to train those into doing their best work, not to check every little detail and constantly hover over them.  Would that directors and managers in various industries today take the attitude that their staff should be free of constant monitoring.

There is little to no exploration of who exactly Jiro Ona is.  Minus a trip to his childhood town where he visits old friends and pays respects to his parent's grave (although he laughingly dismisses the importance of his alcoholic father and the parents who put him out to find his own way before graduating high school) we never dwell or linger on what makes Jiro tick.  I don't think the fillm is meant to be a biography of Ona.  Instead, it is the portrait of someone who seeks to do his best at all times.  If Jiro were a scientist or a composer or a spiritual figure, one imagines he would be no different: always striving to both find ways to make the product better (not cheaper or faster, which are not the same things) but also not deviating from the path of perfection.

"Always look ahead and above yourself," Jiro tells us.  He is reminiscent of what Gustave Flaubert wrote to George Sand: "the man is nothing; the work, everything."  Jiro Ona personifies this idea that one should strive to to the very best work that one can, even in the smallest things.  Like the man himself, Jiro Dreams of Sushi tells its story simply but as it is observed in the film, ultimate simplicity leads to purity.