One of the great unanswered questions about World War II is exactly what role if any Emperor Hirohito of Japan had in the execution of the war.  History records that he was a powerless figurehead nearly totally removed from the actions taken in his name, from the invasions of Korea and Manchuria to the attack on Pearl Harbor, the Bataan Death March, and the rape of Nanking among other highlights during His Majesty's reign.   That has been the Official Story, which has on the whole been maintained for the nearly seventy years since Japan's total defeat (but which has been called into question since the Emperor's death in 1989).

Emperor, the film, appears to be about the investigation into Hirohito's role in the prosecution of the war in the immediate days of the Allied Occupation of Japan.  This would be a fascinating film, seeing how perhaps the machinations of the Allies and the Imperial Court used each other to get what they wanted (even if it meant perhaps allowing a potential war criminal to get away).  Instead, Emperor takes up too much time with a love story which appears to be from another film altogether, and what could have been a great film is instead merely an interesting film for history buffs but which got lost in its determination to put more attention to romance than history.

Japan has been brutally smashed by the Allied forces, in particular the Americans who bore the brunt of the Pacific War (including the opening salvo of the Pearl Harbor bombing by the Imperial Forces of Japan).  Now the Yankees have come to occupy the Land of the Rising Sun, a devastated ruin inches away from total collapse.  Heading up this Occupation is General Douglas MacArthur (Tommy Lee Jones).  One of the first orders of business is to round up any and all Japanese leaders now held to be war criminals, such as Prime Minister Tojo.

﻿﻿﻿﻿﻿﻿So far, so good.  Now the question is what to do about Emperor Hirohito, safely ensconced inside the Imperial Palace.  Washington and the American public wants him dragged out and hung for war crimes.  MacArthur fears that doing so will lead to an already emotionally and physically wrecked nation and population rising up to protect their Divine Sovereign.  Also, there is the question of legality to consider: what role if any DID Hirohito indeed have when it came to the prosecution of the war?
﻿﻿

﻿﻿To answer that, he appoints General Bonner Fellers (Matthew Fox) to investigate just exactly what His Majesty's role was...and to do it in 10 days.  Fellers fears this is not enough time to do so, but this is all the time he has to carry out this investigation.  He has been given a driver/interpreter, Takahashi (Masayoshi Haneda) but Fellers has something more important for him to do.

Fellers had once romanced a young Japanese girl, Aya (Eriko Hatsune), when they were studying at university in 1932.  However, she abruptly left the States without so much as a note.  In 1940, just before the outbreak of war, Fellers went to Japan to find Aya.  However, the government's paranoia about Americans forced the lovers to part, and now Fellers has decided to find whatever happened to the girl he loved and lost in the fog of war.

In all this, somehow the investigation continues, with various members of the Imperial Household attempting to block any suggestion that His Majesty could A.) been in any way involved with the war (their general position was, 'what war?', and B.) that His Divinity could ever be so much as interviewed, let alone answer questions.

In the end Fellers gets all that he seeks: first, we find Aya's fate, and second, His Majesty astounds his advisers by paying a call on the Supreme Commander.  There, a meek but frightened Emperor Hirohito (Takataro Kataoka) goes to MacArthur and does the unthinkable: say he will bear all the responsibility for the war if it will spare his nation.  MacArthur, both genuinely moved and politically shrewd, tells His Majesty that such gestures will not be necessary.  Instead, MacArthur informs The Divine One that he needs HIS help rather than the other way round.

Emperor's greatest flaw is what it thinks is its greatest strength: the love story.  It's not a bad idea to have a story where romance is thwarted by war.  However, David Klass and Vera Blasi's adaptation of Shiro Okamoto's book His Majesty's Salvation never could integrate Feller's odyssey of the heart with his raison d'etre in Japan.  In fact, Emperor never appeared to decide WHICH of the two stories was the actual subplot.  One might imagine Feller's reminiscences about Aya would be secondary to the investigation about Hirohito's role in Japanese war policy: how deeply he was involved, whether he was in the loop or was just a powerless ceremonial sovereign.

Unfortunately, so MUCH time in a short 98-minute film was spent on Feller's romancing and losing Aya and in his quest to discover her fate that it almost turns out the investigation into Hirohito is almost an afterthought.  He does do some questioning, and when he gets unofficial testimony about how at one point Hirohito broke precedent to speak a 'poem of peace' at a Cabinet meeting or how he suggested that his Cabinet, shortly after Hiroshima, agree with him to surrender, we have moments that actually draw us into the story.

Near the end, we have a flashback to when he had recorded his message to the Nation (The Emperor's Speech?) which had to be hidden (along with His Majesty) when fanatical troops attempted to force their way into the Imperial Palace to stop the broadcast.  Given the remarkably small budget Emperor had, it was an exercise in effective filmmaking as wave upon wave of troops attempt a coup.  These scenes, along with those of a devastated Tokyo (we can in some shots still see the capital smoldering in the background), are where Peter Weber makes the most of what he has and makes Emperor a strong film.

However, it's in everything else where Emperor doesn't quite fall apart but which gets bogged down by its own misguided ideas.  As I've stated, far too much time is wasted on the love story which doesn't prove all that interesting.

I can't say that I'm a Matthew Fox fan (given that unlike most people, I didn't care to watch Lost after the first season), and I think an impersonation my friend Isaac does of Fox is better than what Fox does on screen.   However, in this case I'll say that Fox did the best he could with the material he had.  When he is questioning people, he is sharp and focused.  When he is romancing Aya, he looks almost bored.  The voice-over narration (one of the banes of my existence) does not help matters.

Hatsune similarly is given a thankless role, and one that never appears to come off.  She is suppose to be remarkably liberated for a Japanese woman (her phrase), but once back in Nippon she becomes the stereotypical demure, subservient Japanese lady.  The women in Memoirs of a Geisha were stronger and more liberated than Aya.

Tommy Lee Jones is having a grand time as the bombastic but shrewd MacArthur, a mix of someone who wants to build a better nation but who also has his eye on the Presidency.  It's unfortunate that Emperor (which I suspect the filmmakers were suggesting could also refer to MacArthur himself) failed to focus on him, or even bother to have him play much of a role in the story.  As great as Jones is, I wonder whether it was a mistake to not bother to either look or sound like MacArthur.  It looked like Tommy Lee Jones as MacArthur rather than MacArthur, but I give Jones tremendous credit that when he is on screen, Emperor picks up and we are instantly drawn to this vainglorious, cantankerous, and highly skilled military genius.

One big flaw in Emperor is what appears to be a subplot about a rival general who suspects Fellers' motives are less than pure.  This General Richter (Colin Moy) has gone so far as to compile a secret dossier on Fellers with such damning evidence as...he kept bombs away from an area where his ex-girlfriend was rumored to be in.  Why Richter so opposed Fellers (apart from a vague "we beat the Japs and he is a Jap-lover" motive) is left both unexplored and dropped before the film ends.

In the end, Emperor could be the love story or it could be the investigation.  It cannot be both.   On the whole I enjoyed Emperor (being a history buff, a World War II amateur historian, and a lover of Japanese art and culture) I found much to admire.  The historical truth in Emperor is up for debate.  Certainly Herbert P. Bix would contest much of it.  His book Hirohito and the Making of Modern Japan reads like articles of indictment against the Showa Emperor, arguing His Majesty knew and participated and encouraged the war much more than what has been reported.  He certainly didn't buy the idea that he was just this meek little marine biologist who like Mickey Mouse more than killing unarmed civilians.

I can't answer one way or another, and Emperor doesn't give a definitive answer (though it leans on the 'figurehead' side).  If a greater emphasis on the investigation and machinations of keeping the Emperor in power had been addressed (and if Jones' MacArthur had been given a more prominent role), Emperor would have been a great film.  At the moment, what we have is a good film that military and history enthusiasts will enjoy, but which makes a case that here, it would have been better to make war, not love. 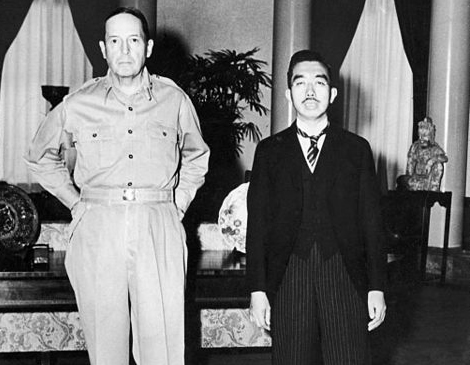