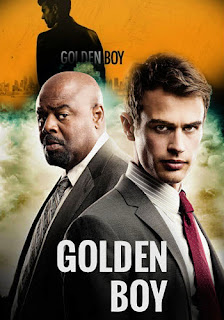 Rookie Shines But Does Not Shimmer...

The police procedural is so synonymous with CBS it might just as well stand for Cop Broadcasting Service.  There's the CSI and NCIS franchises, Blue Bloods, Person of Interest, The Mentalist, Hawaii 5-0, and two new kids: the Sherlock Holmes update Elementary (which I happen to like) and Golden Boy.  How I got started watching Golden Boy I don't remember (I suspect an error in DVD recording), but the series takes a new twist on the cop procedural by going back and forth in time.

Right from the get-go we know that Walter Clark (Theo James) will be at 34 the youngest New York City Police Commissioner in history.  We begin with an interview shortly after Clark achieves this ultimate prize (accomplishing something that future President Theodore Roosevelt took three more years to do).  Then we rush back to his earliest days as a beat cop.  There, he not only stops a hostage situation but saves his badly-wounded partner.  This being 2012, of course this was captured by cell phones, and thus Officer Clark becomes a famous hero.  Our ambitious cop now parlays his notoriety to go from mere cop to Homicide.  Despite his relative youth and inexperience, he gets his way.

Clark now goes into Homicide with lots of buzz, but not everyone warms up to our wunderkind.  Unfortunately for him, two of them happen to be both his 'hero' and his new partner.  In the latter is Don Owen (Chi McBride), a grizzled veteran two years away from retirement.  In the former is Christian Arroyo (Kevin Alejandro), a cock-of-the-walk who thinks Clark needs to learn his place.  Arroyo's partner, Deb McKenzie (Bonnie Somerville) had a brother, also a cop who has passed on before we start our story, who knew Clark and his sister Agnes (Stella Maeve), a girl trying to put her life back together.

Our hot-headed Clark wants to be the one to crack the case presented: a young man murdered, but while Owen counsels patience (my young Padawan) Clark won't either heed his call or investigate the coldest cold case Owen gives him.  He wants the glory, he wants to recognition of his peers, but he still has much to learn.  Chief among his lessons is that he should acknowledge if to no one but himself the trauma he still suffers from the shooting that made him famous (his remarkably old-looking hands shake tremendously when leading a raid and he freezes when presented with an assailant about to shoot him).

Clark is also not above bending the law to get to the prime suspect, Oliver Esten (Roe Hartrampf) a wealthy heir.  He confronts him at a club and has no compulsion against taking his keys and going into his house to acquire evidence.  Clark's press connections threaten to expose the investigation to the public (a BIG no-no), but while Arroyo's less-than-orthodox methods (including being the leak to the press) do get Esten to be unmasked, Owen resorts to being an anonymous tip himself to save himself and Clark.  The Pilot ends with a now-Commissioner Clark reflecting on what he's learned on his first case: what kind of dog he fed in the beginning--the good one or the bad one (the positive side of his personality or the negative).

Golden Boy has the unique vantage point of being in the future, so we should already know that Clark has survived whatever machinations Arroyo or anyone else has created between the age of 27 (when he begins with Homicide) and 34 (the age he is when he becomes Commissioner).  One of Golden Boy's producers, Greg Berlanti, tried this future-flashback framing device on Jack & Bobby, which chronicled the rise of a future President of the United States while telling the backstory of the President and his brother.  An odd moment of history repeating itself.

In any case Golden Boy has slightly more positives than negatives to give it a mild recommendation as a mid-season replacement but which might eventually, if successful, lose or diminish some of its aspects.  For example, the characters are somewhat cliched: the grizzled veteran close to retirement (if McBride ever says that he's getting too old for something, just cancel the series), the cocky hot-tempered youth, the suspicious adversary, the troubled sister.  The actual crime is almost irrelevant to the story, almost as if we HAD to have a murder to give the cops something to do.  Perhaps crimes are solved that fast, I wouldn't know.  However, unlike other crime dramas we don't really bother going into the crime itself because the characters in the precinct are more important.

This is Golden Boy's salvation: the fact that the acting and characters are better than the material they're given.  I am extremely happy that we see a Hispanic in a major role (albeit the heavy, but a positive step nonetheless).  Alejandro knows something important: a villain never sees himself as a villain, and he plays Arroyo as someone who isn't evil but just willing and able to do things to show the new kids who's the boss.  McBride has the world-weariness to Owen down perfectly, someone who sees both peril and potential in Clark but who has his work cut out to whip him into shape.  The way he constantly cuts down Clark's pretensions of grandeur are excellent.


As the titular lead, the British James manages a good American accent.  A Nuw Yowk accent...not so much.  Despite his best efforts (and they are good) I was never convinced he was a native of the Bronx or Brooklyn or Queens...I think Clark is from Queens.  His performance, particularly the physical aspects (the lumbering gait, the slightly hunched-over figure as if trying to not stand out but not willing to slip into the shadows, the clenched fists) indicate that Clark is hungry but clumsy.  He WANTS to be at the center (or in his case, centre) of things but needs the patience and maturity he lacks to get to where he wants to go.  It's clear from the get-go that he's an ambitious young man who burns with desire to rise and rise.  James also has warm moments with his struggling sister (though one wonders why, given he lives alone and is currently unattached, he never has her live with him to begin with).

With Nicholas Wooton's script we get an authentic sound to how colleagues speak to each other, complete with the rivalries and pettiness they have towards each other.  He is obviously building towards something with his characters

What is nice about Golden Boy is that Clark is not shown as a solid good guy.  He is a deeply flawed individual: ruthless, shady in his dealings with Esten, certainly with an ego and a sense of his own greatness.  He isn't the eager young rookie willing to learn to grow at his job.  Instead, Clark is a young man in a hurry, not particularly willing to wait or listen to advise to get ahead.  It will be interesting to see whether Clark follows Owen's example of steady work, Arroyo's example at success at all costs, or perhaps a mixture of the two.  In short, the one answered question in Golden Boy is whether Clark ends up a good guy or bad guy.

I wonder how long the framing device of going to the 'future' will last.  Given that if we are to focus on the crimes the flash-forwards will prove a bit distracting, and tying them to every story seems like padding.  Still, the characters were well-written and well-acted, quickly established (Arroyo's bad, Owen's good, Clark's somewhere in between).  The stories will be driven in the conflict between Owen and Arroyo over who ultimately controls how future Commissioner Clark turns out.  It might even be good to see Commissioner Clark take a case or situation set primarily in the future.

On the whole Golden Boy shows promise, but the violins might be tuning up already for a swan song.

Next Episode: The Price of Revenge
Posted by Rick at 1:49 AM