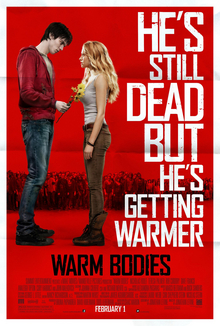 One thing I have never understood about zombies is whether there is a definite rule about their speed.   Some zombies I've seen move painfully slow.  Others I've seen are faster than Usain Bolt.  Not having seen The Walking Dead (and frankly, having no interest to), I can't be certain but I think they are in the 'fast' side of the zombie debate.  Zombies have now sprung up (pun intended) as the new 'cool monster', now that vampires are all but exhausted.

Warm Bodies, the adaptation of the Isaac Marion young adult novel, goes with the idea of a romance between a human and what my high school science teacher used to call "the living impaired".  Going in I had certain misgivings about a romance that skirted close to necrophilia (with just a hint of cannibalism).  Now, however, I see Warm Bodies for what it is: a horror/comedy take on Romeo & Juliet with zombies.  However, it is done with such a knowing wink to the audience of its oddball premise that the scenario is both played for laughs and played deathly straight (pun intended).

R. (Nicholas Hoult) is one of the many zombies who spend their days wandering the airport and occasionally eating the living's brains.   However, in his voice-over we find he's an unusual zombie: he actually thinks about things.  He wonders who he was before people turned into zombies (since he can't remember, we never learn for certain), what kind of person he was, and what his name actually is (all he can remember is that it starts with an "R").  He feels guilty about eating brains and in his own way wants that human connection the undead rarely get.

Meanwhile, the humans live in an enclosed city, attempting to keep the zombies at bay.  Heading up this lost colony is Grigio (John Malkovich), whose policy is shoot first ask no questions.  He has a daughter, Julie (Teresa Palmer), who along with her boyfriend Perry (Dave Franco) goes out into the occupied zone to acquire supplies.  While there, a group of zombies, including R and his 'best friend' (or as close to a best friend zombies can have), M (Rob Corddry) attack them.  Even though R ends up eating Perry's brains, he is also instantly fascinated, dare I say smitten, by our flaxen-haired beauty.  Despite all his zombie instincts, R rescues Julie and takes her to his 'home', an airplane filled with all sorts of collections (including vinyl records).

Julie is at first fearful of R, but soon she starts warming up to his hesitancy to verbalize his thoughts (yes, this zombie can haltingly form words).  Soon, she starts seeing R in a different light, and R conversely finds that his heart soon starts beating.  Could it be that he is coming back to life?

By eating Perry's brains, he is able to acquire his memories, and soon R finds himself falling in love with Julie.  Whether Julie returns the sentiments is a little more complicated, but she does see R as a different kind of zombie, not this thing to be feared but someone whom one can reach.  Obviously Grigio wouldn't see it that way.  R does eventually tell Julie in his own way that he did eat Perry, so it's no surprise that the next day she leaves before he does, but she leaves slightly conflicted.

Meanwhile, R and Julie holding hands before a group of zombies (including M) trigger something within them, and they soon start acquiring beating hearts.  This takes everyone by surprise, but displeases the 'boneys", a group of zombies who would eat anything (even other zombies).  M and R find each other, and while R is still disappointed that Julie has left him, M tells him that the bonies are on the march against them.  There's only one thing for it: R must warn and save Julie, even if it means entering the citadel.

He does, they try to pass him off as human with a little help from Julie's best friend Nora (Analeigh Tipton), and while they have to flee an angry Grigio, they end up being part of a union of human and zombie to defeat the boneys.  In the end, R manages to come back to full human life, and the zombies soon start reentering society as they progress back to full human status.

I just wonder why the sheriff on The Walking Dead doesn't just try to ask one of them on a date.  He's a widower so it's perfectly respectable.  Just a thought.

Warm Bodies is fully aware of the far-fetched nature of the story, but it also doesn't try to make things broad.  Instead, writer/director Jonathan Levine manages to keep the balance between the comic and the romantic.  Yes, I said romantic because Warm Bodies on the surface can be about a zombie (a thinking zombie mind you) who falls in love with a human, but it can also be read as the story of a lost man who finds he finally comes alive when he meets a girl who is both not just pretty but whom he sees as a kind girl.

In terms of the Romeo & Juliet update, it's clear that Warm Bodies was inspired by the Shakespeare masterpiece.  The most blatant example is when R(omeo) and Julie(t) have a balcony scene when R breaks into her garden, where his appearance can mean death...again.  We even have someone calling to Julie(t) from inside the house.  Granted, it's Nora not Nurse who does it, but this scene makes it clear that Warm Bodies takes its cue from another tale of star-crossed lovers.  We can even extend things slightly if we substitute Tybalt for Perry to see that R/Romeo killed someone close to Julie/Juliet.

This doesn't take away from the charm of Warm Bodies.  Normally, I dislike voice-overs, but in this case I can see why they were so important: zombies are notoriously monosyllabic.  We can hear that R is really a conflicted zombie, attempting to find the humanity within him while knowing that he isn't among the living.  Like all young men in love, R is terribly tongue-tied with a pretty girl he likes but is afraid won't like him because of who he is.

There's a mixture of comedy and romance throughout Warm Bodies, especially when the zombies start coming to life.  When R entcounters M and basically says that Julie left him, M manages to grunt out, "Bitches, man," which even had me laughing.  Men can respond so badly when getting dumped.

Hoult and Palmer work well together as the curious couple.  Hoult doesn't go for laughs as the zombie in love but instead manages to create a sympathetic character even if he does eat brains.  Palmer has a little less to do as the girl who finds someone to care about among the undead, but she manages also to hold her own against an actor on the level of Malkovich.  He in turn to his credit never plays Grigio as a villain.  Instead, he is a father who wants to protect his daughter and the other living at all cost.  Franco has long left his brother James' shadow with 21 Jump Street, and while he was mostly shown in flashbacks (and in a first, a zombie dream sequence) he still had good moments in his mix of cockiness and sincerity in Grigio's worldview.

For me, the highlight was Tipton's Nora, who was the great comic relief of Warm Bodies (and given that it is a bit of a comedy, that's saying a lot).  She was the quick-witted best friend who finds that R, once given a little make-over, was actually pretty hot to her.  Side note: Hoult's reaction when informed that in order to pass for human, he'd have to wear make-up was great: even as an undead, men don't want mascara and eyeliner.

Warm Bodies moved quickly (no pun intended) and had a genuine heart to it (ditto).  It probably isn't best to bring children to it (zombies can still kill) but the premise is not heavily-focused on the fact that he's a zombie.  It's acknowledged, but really this is more a story of a shy guy who finds himself attracted to a girl and who in turn finds that being himself can reap the rewards of love...even if he is technically dead.

Then again, aren't we all in a sense, dead until love finds us?