Life With Lucy: One Good Grandparent Deserves Another Review 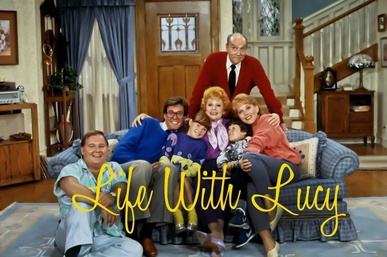 Life With Lucy:
One Good Grandparent Deserves Another

The entire series of Life With Lucy is the Star Wars Holiday Special for Lucille Ball fans: an embarrassment that tarnishes a legitimate icon and pioneer of television.  This was Ball's fourth television series, and while I Love Lucy became the Citizen Kane of situation comedies, both The Lucy Show and Here's Lucy were respectable and funny, catering to family audiences who delighted in the "Lucy" character befuddling her stuffy counterpart (always played by Gale Gordon).  Neither The Lucy Show or Here's Lucy took away from her status or added anything iconic, but they are still amusing (if at times, dated).

Life With Lucy, on the other hand, simply coasted on the "Lucy" legend, and based on its premiere episode One Good Grandparent Deserves Another, it is clear that no one bothered to tell both the audience and the production crew (both in front and behind the camera) that it just wasn't going to work.

Lucy Barker (Ball), a health-obsessed grandmother and recent widow, has moved into the home of her daughter Margo (Ann Dusenberry) and son-in-law Ted (Larry Anderson), and their two children Becky and Kevin (Jenny Lewis and Phillip J. Amelio, Jr.).  Lucy co-owns a hardware store with her in-law Curtis (Gale Gordon).  Curtis is none-too-thrilled to have Lucy, whom he has a barely concealed contempt for Lucy, is horrified when he learns that she's made 'improvements' to the store.

At the store, Lucy shows off her improvements (putting all the items in alphabetical order), then shows off two other items to a shocked Curtis.  The first is an industrial-size fire extinguisher, the second is a pasta maker.  Needless to say, both were used in the episode.  At the end of One Good Grandparent Deserves Another, Curtis informs everyone that he too is moving in with Ted and Margo, with various reactions (Margo I think thrilled, Ted horrified, Lucy a mix).

It is unfair to blame either Ball or Gordon for the failure of One Good Grandparent Deserves Another specifically and Life With Lucy in general.  Both of them are still surprisingly agile and have great timing at ages 75 (Ball) and 80 (Gordon).   Gordon in particular shows he still has a great delivery to all his lines, even if they are terribly inferior.

The failure of Life With Lucy is spread all around.  The first one is the script.   It is almost astonishing that Bob Carroll, Jr. and Madelyn Davis, the creative writers who were behind some of I Love Lucy's greatest moments, could have come up with such abysmal material.  Then again, perhaps it isn't a surprise.  Sometimes television writers can end up just copying themselves, repeating the same story without realizing it (just ask Doctor Who's Steven Moffat).  What was new, fresh, and original in the 1950s simply wouldn't go in 1986.  While the Number One show at the time (The Golden Girls) similarly featured older women (though to be fair, none as old as the 75-year-old Ball) they were also contemporary, unafraid to talk about such things as their sex lives, prescription and gambling addiction, and difficulties with being parent or grandparents.

Life With Lucy, on the other hand, would not accept the fact that both television and the world had changed since Eisenhower was first inaugurated.  Even the audience understood things: when the industrial-sized fire extinguisher was revealed, there was already laughter, as if the audience knew what was coming.  Good comedy can come from expectation, but nothing so patently obvious.

Even worse, no one wanted to acknowledge the two leads' ages when coming up with these gags.  There were surprisingly few laughs when Ball crashes into Gordon's nose while rolling on a ladder.  One horrifying scene involves that pasta maker.  Lucy, in her inevitable way, gets Curtis' tie caught in it and as she keeps demonstrating it keeps grinding his tie.  Perhaps in the past we might have been laughing.  Today, you think, 'my God, she's going to kill him', and it becomes an almost horrifying spectacle.

Another simply inexplicable aspect of Life With Lucy was the acting.  Ball still shows she can handle the physical comedy and Gordon actually manages to outshine the Queen of Comedy.   It's everyone else who is simply horrible.

Perhaps Peter Baldwin just directed everyone to basically just stand there and say the words on the script (or in Ball's case, the cue cards).  However, One Good Grandparent Deserves Another has such a broad style of performing that it almost ends up a series of muggings for the camera.  One can forgive Lewis and the late Amelio (the youngest cast member dying suddenly at age 27 from a bacterial infection) for bad line reading.  Children can use their age as an excuse.

Dusenberry and Anderson, however, have no such recourse.  They were simply awful in this episode: wildly overacting and behaving as though they were practically dragged out of a community theater production and thrown onto the set.  Neither of them appeared to believe in any of the script and behaved like rank amateurs.

Finally, what made OGGDA such a bizarre, even sad thing to watch is that the audience simply should have known better.  Ball and Gordon received extended ovations merely by showing up.  They didn't do anything to merit such lavish applause; they just appeared.  Even worse, gags like the pasta maker and the extinguisher received great applause when they just weren't funny.

The audience appeared to give Ball and Gordon great love (which their careers certainly had earned) but if one listens to the laugh track and the dialogue, one will find that the laughs are few and far between.

The material wasn't there.  The performances (save for Ball and Gordon) weren't there.  The scenario was not allowed to build up (why exactly was Curtis so hostile to Lucy?).  Adding things to make Life With Lucy more perplexing is what is suppose to make Lucy Barker so endearing.  WHY would someone in her seventies arrange the hardware store in alphabetical order?  It doesn't make her look scatterbrained, it makes her look senile, almost insane.

Life With Lucy has not been released on DVD.  Truth be told, I wouldn't mind owning it.  As a Lucille Ball fan I enjoy her work.  Perhaps One Good Grandparent Deserves Another was just a bad fluke (although I suspect that succeeding episodes were more suited for the 1960s than the 1980s).  Life With Lucy might have worked perhaps as a special.  It might have worked if the creative team behind the series (Ball, her husband Gary Morton, producer Aaron Spelling) had reworked it to adapt to the times or give the Lucy Barker character a partner in crime a la Vivian Vance.

However, Life With Lucy didn't work.  It was listed as the 21st Dumbest Television Moment in Television History in David Hofstede's book What Were They Thinking? along such television barbarisms as the Star Trek Season Three opener Spock's Brain (ironically produced by Ball's Desilu Studios), Pink Lady & Jeff (the entire series), the Snow White/Rob Lowe opening number from the 62th Annual Academy Awards, the "It Was All a Dream" season of Dallas, and the Star Wars Holiday Special.  I wouldn't say it's as bad as any of those debacles, but truly, Life With Lucy is a sour note on which to end a brilliant career.

This Life is not worth examining...