Britney Ever After: The Television Movie 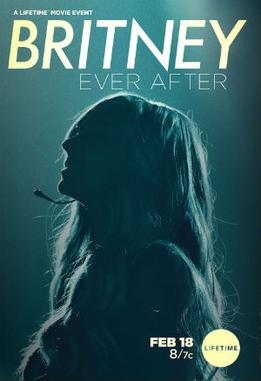 I'm going to go out on a limb here and say that Britney Spears is not going to build a Kennedy Center Honors-worthy career.   She's a pop star, whose music is disposable, some of it entertaining, but not something that will last.  Currently enjoying a comeback of sorts as she is in residency at the Planet Hollywood Hotel & Casino in Las Vegas, Spears has more important things to think about than such trifles as Britney Ever After, a television biopic that appears to barely know its own subject.

Using a 2008 documentary about her as a framing device, Britney Ever After chronicles the rise, fall, and return of our pop princess.  A fresh-faced youngster who mixed innocence with allure, Britney Spears (Natasha Bassett) gets a great break when she's chosen to be the opening act to N*Sync, the hottest boy band around (hottest in more than one sense).  It isn't long before she reconnects with the breakout star of N*Sync, Justin Timberlake (Nathan Keyes).  They begin a clandestine romance, but their careers get in the way.

This leads to a very bad breakup between Brit-Brit and JT, and Britney Ever After has our pop diva essentially never getting over the end of their romance.  While JT went on to major solo success (culminating in a recent Oscar nomination for Best Original Song), Spears has essentially gone through a long parade of eccentric and unhealthy behavior (and is almost always thinking about what 'he' is thinking about her). There's a quickie marriage to a childhood friend, Jason Alexander (Kelly McCabe), a descent into partying and self-indulgence (which curiously did not involve illegal narcotics), another marriage to shameless backup dancer/party boy Kevin Federline (Clayton Chitty) and the control of a hanger-on, Sam Lufti (Benjamin Arce).

Lufti's control is total, not quite Svengali but close to it, while Spears' parents James and Lynne Spears (Matthew Harrison and Nicole Oliver) can only watch helplessly as their little girl essentially goes bonkers.  The nadir of Brit-Brit done cray-cray is her shaving her head before attacking the incessant paparazzi with an umbrella (and that was following a disastrous MTV Video Music Awards performance).

Eventually, she is admitted to a mental health institution where, still concerned over what JT thinks, she pulls herself together to revive her career, with her long-suffering manager Larry Rudolph (Peter Benson) by her side (with a slight break when she fired him).

A lot of blame should land, not at the actors (who I figured tried to do what they could with what they were given), but with the production team.  They weren't able to get the rights to Spears' catalog, so we miss out on a lot of things.  The cheap quality of the production emphasizes who bad and inept Britney Ever After is, even for Lifetime. Take her infamous VMA performance where she was the opening act debuting her single Gimme More.  The most Britney Ever After could do was the opening dialogue, and because they didn't have the rights to Gimme More, they couldn't even add the "It's Britney bitch" line.

The recreated performance in Britney Ever After is obviously cheap and doesn't look anywhere near the disastrous reality (Entertainment Weekly featured Spears' performance on the cover with the headline Oh, The Horror!).  Moreover, it can't even get the basics right.  In the VMAs, Spears is clearly without anything on her head.  In Britney Ever After, she wears a cap.

Granted, these are little details, but when something can be verified so easily, the least that the production team could do is try to be as authentic as possible.  Here, they failed almost as bad as Spears' sleepwalking, mumbling fiasco.

It's already quite bad when we face a whole slew of errors, but the film is loaded with terrible performances.  I'll grant that Bassett bears something of a similarity to Spears (particularly the wide eyes) but when she is at her most bonkers at a photo shoot, she doesn't look like she's either totally spaced out or being a diva.  The performance is unsteady, as if no one knew what kind of person Spears was: a clueless child, a self-centered pop star, a complete psycho.  Her efforts to play crazy were not horrible, but one moment played to such a horrifyingly bad effect that everything after came across as ludicrous.

After her breakup with JT, she finds him with another girl at a club.  In order to settle things once and for all, they essentially have a dance-off.  Seeing her slink and slither while he goes for a little pop-and-lock (down to taking his hoodie off to show off his wife-beater shirt.  The whole thing is pretty bonkers and comical, the fact that Britney Ever After wants it to be a serious moment making things more hilarious.

Bassett gave a bad performance, but it was probably better than just about everyone else's save Benson.  Chitty looks nothing like Timberlake (apart from JT's awful frosted and curled locks).  He looks far too old to be a convincing teen pop star, and his dialogue and swagger make him look more annoying than interesting.

We can skip over how none of the other backup singers for Timberlake (formerly known as N*Sync) look like any of the real-life figures (since they had little to do, just like N*Sync in real life).  You kind of figured out which one was Lance Bass merely because he didn't look like the vague versions of J.C., Chris, or Joey Fat-One (and I don't remember the one meant to be Bass actually saying anything).

James Spears was all one-note (crabby and drunk) and Lynne was all worry, worry, worry.  We get characters who pop in and one without knowing who any of them actually are (the hanger-on who went with Spears to a fashion shoot where Spears was completely out of it was some random person), and while we have characters credited as "Paris Hilton" or "Jamie Foxx", I sure don't remember who or what they were.

As for Federline, he pops in and out so quickly I think no more than ten minutes if that was spent on this toxic relationship.

Even whatever glee you could get when you see Spears at her worst is not there.  Her total meltdown is not shown, but like a lot of Britney Ever After, hinted at.  Plot points or situations (such as a potential sex tape entre JT & Brit-Brit) is dropped almost as quickly as it's mentioned.

There is no point to Britney Ever After, except perhaps to note that her whole life has been an effort to get Justin Timberlake's attention.  Even that infamous kiss between Spears and Madonna at another VMA was done to get a reaction out of him (I think he was not amused).   It gives you no insight into who Spears is or why her rise, fall, and comeback is something even her fans should care about.  It's a typically bad Lifetime production, and while perhaps one can enjoy it in a 'so bad it's good' style, it really isn't anything worth anyone's time or interest.

With regards to Britney Spears, we should heed the advise and "Leave Britney Alone".