When you have an episode of Feud: Bette and Joan titled Mommie Dearest, one might think they are going to take another jab at Joan Crawford's notorious (but unproven) charges of vicious child abuse.  No.  They are playing you.  Instead, Mommie Dearest is primarily about Bette Davis' role as mother to her biological daughter B.D. Hyman (then Merrill), her own fraught relationship, as well as the effects Davis and Crawford's mothers had on them as adults.  We even have how one became a 'mother' of sorts to one of the What Ever Happened to Baby Jane? costars, and we have the best episode of Feud yet: a tragedy of broken people brilliantly acted.

What Ever Happened to Baby Jane? continues filming, but Joan Crawford (Jessica Lange) is concerned over the influence B.D. (Kiernan Shipka) is having over Crawford's twin daughters, who despite being teenagers are dressed like little children.  B.D.'s mother, Bette Davis (Susan Sarandon) is beginning to be concerned that B.D. may indeed be a bit directionless, so she reluctantly gives in to her director Robert Aldrich (Alfred Molina) to cast B.D. in a role in the film.

It proves to be a poor decision, for the highly professional Davis sees that B.D. is not an actress.  This is the first of some bad decisions from Davis.  She attempts to keep a working relationship with Crawford and invites her rival to drinks (which she knows the alcoholic Crawford won't turn down).  They end up talking about their mothers and their philosophies on motherhood.  Crawford's admission that she lost her virginity at 12 to her stepfather, and that Crawford did it willingly, shocks even the generally unflappable Davis, who didn't lose her virginity until her wedding night. Further, the hatred and emotional/physical abuse Crawford suffered at the hands of her mother is a sharp contrast to the loving and close bond Davis had with her own mother, who has recently died.

This conversation and opening up between them might have been a rapprochement between them, but that doesn't last long.  Davis is enraged when she reads that Crawford has fed to Hedda Hopper (Judy Davis) that Davis has decided to put herself up for a Best Supporting Actress Oscar for Baby Jane (one guess who is going for Lead).  They fight in front of the crew over the chances for Oscar, which shocks Aldrich, who points out the film isn't even finished.

Crawford is becoming more difficult with her drinking and obsession with looking her best, down to padding her bra when doing the ending beach scene.  Warner Brothers head Jack Warner (Stanley Tucci) finds the whole scene appalling.  "It's like Camille in reverse!" he snaps, complaining that Crawford keeps looking better despite the fact her character is supposedly dying.  While Crawford has gained the crew's favor with her kind manner towards them, Davis, for her part, has bonded with her costar, Victor Buono (Dominic Burgess).  The openly gay Buono fits into Davis' unencouraged fascination with homosexuals ("All the queens love me", she tells a delighted Buono, and even does an imitation of her female impersonators to please him).

Davis is better with Buono than with B.D., whom she doesn't have the heart to tell is awful.  Davis goes to bat for Buono, down to bailing him out when he's arrested in a raid on a gay theater where he's been 'auditioning' a young man.  Crawford is frankly too busy struggling with being alone (the twins having gone off to camp) to notice anything beside herself, and at last, after a lot of physical struggle where both costars physically hurt the other whenever they can, What Ever Happened to Baby Jane? is completed. 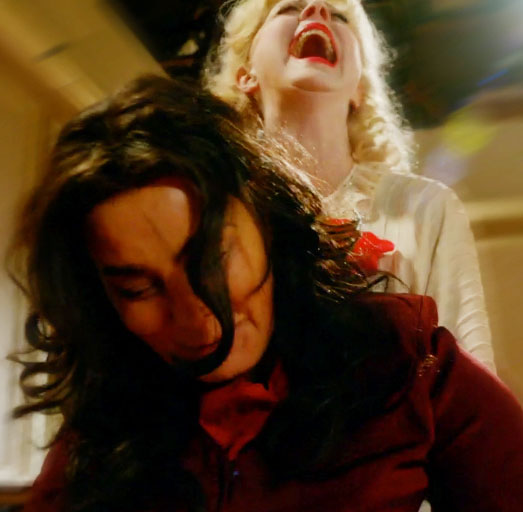 Mommie Dearest brilliantly plays with all variations of 'mother'.  We have, despite the title, very little of Crawford's relationship with her oldest daughter, Christina, the author of the notorious best-seller that has permanently ruined Crawford's reputation.  She's mentioned only in one scene, where Crawford insists she won't send her daughter flowers or a card congratulating her on Christina's opening night.  However, we see the complex nature of Crawford's emotional world when shortly after, she does indeed sign her card, closing with 'Mommie Dearest'.  It's both a clever joke and an indication that Joan Crawford was more complex emotionally on this aspect of her life.

With Lange's performance and Tim Minear's script, we see how damaged Crawford was when it came to the issue of mothers: both as a daughter and a mother.  This episode was Lange's best performance so far; from the scene at the bar where she talks about how fraught her relationship with her own mother was, how much she hated her and would gravitate towards anyone who showed her a modicum of love, to the intense fear of being alone, Lange both shocks and breaks your heart as Crawford.

Sarandon too gives a brilliant performance, especially since she is more central to Mommie Dearest than Lange's character.  Davis' own fears and pain about her children come to the forefront.  Of particular note is when Davis calls the hospital where her own adopted daughter Margo is.  The mentally challenged girl cannot keep attention to Davis on the phone, and Davis' mixture of regret and pain at not being able to help her are played so well.

Both Lange and Davis work well together whenever they are raving at each other, which makes perhaps one flaw in Mommie Dearest more evident.  There is a montage of their filming What Ever Happened to Baby Jane? that leaves something to be desires.  We see how Davis took advantage of a scene to kick Crawford in the head (whether this was an 'accident' or deliberate is a bit unclear, but we get strong hints she did it on purpose).  It makes Crawford's revenge (adding weights to her when Davis has to drag her off after ruining various takes by laughing as a result of being 'ticklish') both understandable and sadly not as well-drawn as could have been.

According to stories, Crawford's dead weight caused her to fall on top of Davis, who suffered from a bad back.  Davis had to go to a hospital for two days as a result of her injury, and one would think a whole or major part of a Feud episode could have been focused on the acts of violence the two rivals took on each other.  Sadly, it was reduced to a montage.

Yet I digress, for we have in Mommie Dearest one of the best-written and acted episodes of this short series.  We see the evolution of Davis' view of Buono, who at first horrified and appalled her (when told he was a Shakespearean actor despite having no major work outside San Diego, she snaps "I'm sure his Falstaff is the talk of Tijuana!"), turn to admiration (when Aldrich tells her she likes him, she retorts, "I like talent!") and even a bit of genuine affection (her "WHAT A DUMP!" line and her bailing him out of a shocking situation).

Burgess does well as Buono, and we even get a little history lesson when we see Buono hanging out at a gay theater, forgetting that once these types of establishments not only allowed for illicit hookups between men but that they ran the constant risk of being raided, with their patrons arrested and thus publicly outed and humiliated to a less tolerant world.

Credit also goes to Shipka, who 'acts' badly and also shows she too wishes for her mother's approval.

From playing Mama Said There's Be Days Like This in a montage to showing how both Crawford and Davis were products of their childhood, from the performances to the verbal catfight between them (down to Davis insisting she was robbed in 1950 thanks to her All About Eve costar, 'that bitch' Anne Baxter, and Crawford's retorts that Davis both demeaned Judy Holliday and it was Gloria Swanson who was robbed that year), Mommie Dearest had it all.  There was a great script in turns insightful and witty, brilliant acting all around, and some bits of strong comedy and drama. Next Episode: More, Or Less