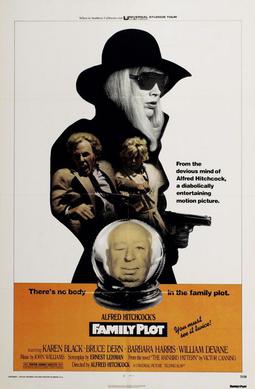 For the longest time, I had theorized that after The Birds, the output Alfred Hitchcock made was not good.  This is due to my dislike of Marnie and both the limited reputations of Topaz, Torn Curtain, Frenzy, and Family Plot as well as how they are not as well-remembered as Psycho, Vertigo, or The Birds.  Now, having seen Family Plot, I find that I was wrong.  While Family Plot isn't as well-remembered or known as some of Hitch's classics, and isn't on par with his work in the 50s and 60s, it is a good film: a nice comic caper with a mix of action and comedy.

Madame Blanche (Barbara Harris) is a sham medium who hoodwinks various wealthy women into thinking she can contact their relatives from The Great Beyond.  In one faux-séance, she hits the motherload.  Elderly Julia Rainbird (Cathleen Nesbitt) reveals that her late sister had an illegitimate child that Julia gave away and now she wants to find her long-lost nephew to make him her heir.  She's willing to pay Madame Blanche $10,000.

Blanche Tyler and her boyfriend, actor/cabbie George (Bruce Dern) now begin their investigation to find the Rainbird heir with the few scraps of information they have.  Masquerading as an attorney, George starts digging, finding that this child, Edward Shoebridge, apparently died in a fire with his adoptive parents.

I say apparently because as George keeps going, we find that Edward faked his death.  This is where we get into our second story.  Edward now goes by Arthur Adamson (William Devane) and Arthur/Edward is a master criminal: abducting wealthy people and demanding large diamonds as payments.  Aided by Fran (Karen Black), the racket has been highly successful.

Blanche and George have inadvertently stumbled onto Arthur's criminal world, and his friend who helped burn up his parents, Joe Maloney (Ed Lauter) is terrified they are investigating their past, not Arthur's future.  He attempts to kill them and ends up dying himself.  Blanche and George are thoroughly puzzled as to why anyone would want to kill them, especially since they are desperate to give Edward GOOD news.

Fran and Arthur have abducted an archbishop, and Blanche who has finally tracked down Edward, stumbles into them when they're about to go and get the ransom.  Now, with Blanche's life in danger, it's up to an unsuspecting George to save them.  Things end well: our criminals are caught, Blanche appears to have a real psychic moment leading to finding the diamonds (hidden in plain sight in a chandelier) and while George goes to call the police, Blanche sits at the stairs...and gives us the audience a wink.

Family Plot has a light atmosphere to it, which isn't in the normal Hitchcock canon, nor generally in that of screenwriter Ernest Lehman.  There's no overt or graphic violence (a departure from both the general 1970s filmmaking and from something like Frenzy) and the crimes of theft and kidnapping don't have graphic violence in them.  The most intense moment that I can remember is when Blanche and George find themselves racing down a winding road with the brakes taken out.

This moment, despite the obvious rear-screen projection, was actually quite tense, a credit to Hitchcock's still-impressive ability to put people in danger.  However, even this moment was given a bit of a comedic spin by Harris' hysterics: her flaying about, holding onto George, even almost strangling him as she pulls on his tie as she flies about the car.

This was intention, and a lot of Family Plot was in a more breezy, light-hearted manner than something as dark and intense as say, Vertigo.  I was surprised at how delightful Family Plot was and enjoyed the humor and the lessening of violence and stakes.

So much credit goes to Barbara Harris for her turn as the slightly wacky, slightly campy but almost naïve Blanche.  She never depended on the kindness of strangers, but on her own wits to get her ahead.  Credit her for giving a strong performance whenever she goes into a 'trance' at her séances: the way her voice rises to a willowy, sing-sing manner as she communes with "Harry", and the darkening of her voice when "Harry" speaks.  Her body movements, particularly when in a 'trance' are almost manically balletic, and add considerably to the comic overtones of Family Plot.

Dern also does well, though he isn't comedic but more straightforward.  He does have some comic manner to him, looking a bit befuddled when he tries to match wits with Blanche, but Dern handles the action moments (particularly the runaway car) with more seriousness, a strong counterbalance to Harris' broad manner.

Karen Black, I don't think, has gotten enough credit for her contributions to Family Plot.  If people remember the film, it's mostly due to Harris' comic manner (and I'd argue, rightly so).  However, Black gave a strong dramatic performance as the more conflicted Fran, who delights in the kidnappings and ransoms but is more hesitant at being part of murder.  She could just as easily have been the center of the film, for she was a very good character to see the story through.  Black did a fantastic job.

Devane was so obviously the charming villain, and while it wasn't a big performance it was a nice one: oily and calm, he could be quietly menacing when needed.

Hitchcock, even in his infirmity and advanced age (he directed Family Plot at age 77 and this would be his final film) still could command great moments.  There was the ransom pickup early in the film (where the two stories first meet when George almost runs Fran down).  Fran never says a single word throughout the long scene, but still pulls off a great and clever ransom payment.

As a side note, it is surprising to Cheers fans to see Coach himself (Nicholas Colasanto) in a small role as a kidnapping victim and Mona from Who's the Boss (Katherine Helmond) as Mrs. Maloney.

The last, but certainly not least, positive element in Family Plot is the score, the only Hitchcock film to have the music of John Williams.  Williams, a true genius, creates this somewhat eerie score, with otherworldly vocals whenever Madame Blanche works her magic but also tense when needed.  Williams is certainly more than Bernard Herrmann's equal and Family Plot is another in Williams' brilliant canon.

About the only real fault I can find in Family Plot is when Blanche and George have an open-air argument.  It looked fake, it was far too convenient for them to reveal major plot points out in the open, and I'd argue that Fran and Arthur/Edward were too far away in their car to hear them so clearly.  I figure it was done for the audience's benefit (to show that our villains had identified our heroes) but the whole scene just didn't work.

Minus that, Family Plot is perhaps not among Alfred Hitchcock's great films like The Man Who Knew Too Much or North By Northwest, but it's a fun, breezy, lighthearted caper that I wouldn't object to being remade.

Remaking Family Plot is certainly a damn sight better than the idea of remaking or rebooting The Matrix.