In some ways, Z is a dark comedy, a sense of comic insanity within a virtual horror story of political machinations and a fearful government pulling out all the stops to stop one man and his ideas.  In its fury, its dark sense of humor, Z doesn't hold back (the film opens with a straightforward message: Any similarity to real persons and events is not coincidental.  It is intentional).  It's a cry of anger, mixed with a sense of the absurd and tragic on how truth doesn't always win.

In an unnamed nation (though presumably Greece), the military leaders want to get rid of 'intellectual mildew' as much as they want to get rid of actual mildew.  The intellectual mildew is headed by a Doctor who is a legislative Deputy (Yves Montand) who insists he is not on the Left or Right (but it's a case of he doth protest too much, for he is firmly Left).  The Deputy wants nuclear disarmament and to get out of all foreign entanglements, but his efforts to hold a rally keep getting thwarted by the military (they pull the hall, push other halls to not book his group).  Eventually, they relent to give the guise of a democracy and give them a much smaller hall.

If there's one thing the military doesn't want, it's a prominent pacifist making trouble for them, even if he is a Member of Parliament.

The Deputy gives his speech after getting attacked by professional thugs.  It's a quiet, thoughtful speech but one that is not accepted for various reasons.  There's the professional mob, hired by the military to cause trouble.  All the officials are at a Bolshoi Ballet touring company performance, and what press is there is harassed to photograph the elegance at the Bolshoi rather than the coarseness of the meeting.

The Deputy walks out into a tense situation with his aides, and spots one of the high government officials.  Going to him, 'out of nowhere' a truck comes that whacks the Deputy on the head.  From here, chaos erupts: the police does nothing, the aides find hindrances to get the Deputy to hospital, and there doesn't seem to be an interest in getting either the Deputy to safety or seeing whoever did this punished.

As far as the government is concerned, it was the act of a drunk driver...and they're sticking to it. 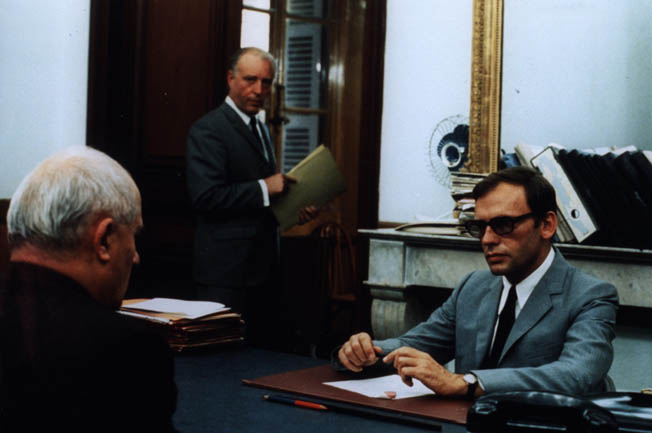 Enter the Judge of Inquiry (Jean-Louis Trintignant), who is examining the case.  He's nonpartisan, interested only in the Truth.  He would go along with the official story, if the doctors had confirmed it.  Finding that they reject the 'drunk driver' excuse because the Deputy died as a result to a blunt force on his dead that came from above it, the Judge of Inquiry pushes on, digging further into it.  The military does its best to make their version pass itself off as The Truth, but the Judge continues finding errors, inconsistencies, and pesky witnesses who either tell the truth or are clumsy in their lies.

A witness comes forward tying a particular person to the Deputy's murder (which the Judge insists on calling 'an incident').  He's a simple coffin varnisher, who has no interest in politics, only football.  This witness finds his life almost ended in 'an accident', and while the military lets him know life could be better if he sees things their way he opts for the truth.  Over time, the Judge pushes forward until he has enough evidence that the Deputy was murdered (a turning point in Z is when the Judge without realizing it uses the term 'murder' over 'incident').  Both helping and hindering the Judge is a reporter (Jacques Perrin), who at times is interested in exposing the truth, and others to benefit himself.

The Judge hauls the high-ranking military officials one by one, until he reaches the very top.  To each one's moral outrage the Judge is the same: asking for their name and occupation to start the interview, and ending with charging them with murder.  The Reporter goes on air to report the epilogue: various witnesses died through suicides and accidents (one killed himself by throwing himself into a pool after tying himself up in a chair), the Deputy's various associates meeting either death or exile, and the Judge loses his job.  The various opposition parties join forces and are poised to win a major victory...when the military steps in and takes power.

Among the things the new junta ban are miniskirts, long hair, Russian-style toasts, both modern and pop music (including The Beatles), new math, and the letter Z (which stands for "He Lives" in ancient Greek).

If my French is correct, among other things listed but not read in voice-over that the government banned was the learning of both Russian and Bulgarian and writing that Socrates was a homosexual. Z does not skimp on a wry, sardonic humor. Near the end of Z, there's a wicked mockery of the military when each military officer involved walks to the Judge's office.  As Mikis Theodorakis' score goes an almost comical take on the pomposity and faux-outrage of the generals, director Costa-Gavras focuses on both the medals and the press reaction to them.

The medals appear to grow and grow with each military official, as if they were trying to outdo the previous one with their own sense of power.  The press seems to grow more and more timid when they go in, but when the generals are escorted out through a back door (to try and avoid the press), each general attempts to open a side door, growing more frustrated when they find it locked.  At the end, when the main general finds himself caught in the back by the eager press, our main Journalist taunts him by asking if he feels victimized like Alfred Dreyfus (the Jewish officer whose wrongful conviction of espionage caused a major French scandal which I think still tears the nation).  An outraged General shouts, "DREYFUS WAS GUILTY!", revealing how French Z is despite the Greek setting.

Costa-Gavras gives us little details that say much without having to spell things out.  For example, we know that one of the actual assassins (members of a secret organization propped up by the military calling itself the Christian Royalist Organization against Communism or CROC), looks with lust on a young boy looking out at the protest from his balcony.  All we need is the assassin's shifting eyes and his fellow conspirators wry remark "It's the same story, isn't it?" to let us know what's up.  Later on, that assassin finds the boy playing a pinball machine, and slowly but surely his hand manages to touch the boy's hand.

The scenes with the varnisher are also amusing, his efforts to get the truth out constantly interrupted by his mother or his sister, and their interfamily squabbles making things hard for almost everyone.

There are moments of harsh comedy and witty lines (one of the Leftists tells the Deputy to blame the Americans because you always blame the Americans, even if they had nothing to do with it), but don't let that fool you.  Z is also an angry film, outraged at the lengths one group will go to in order to stop someone they see as a threat, including murder and conspiracy.

Theodorakis' score is in turns fast-paced but angry, almost urgent, signaling the intensity and danger of the situation.  Costa-Gavras keeps things flowing pretty well, filling the movie with a strong sense of outrage at how the military holds the opposition as something 'unhealthy' (more than once are there references to a scientific bent, such as when the assassins compare themselves to antibodies).

The large role goes to Trintignant as the Judge, keeping a stern, almost cold manner in his investigation.  He is neither pro-Deputy or pro-military, seeing his duty only to the Truth.  Montand was elegant and stoic as the Deputy, noble without being insufferable.  Sadly, Irene Papas (the only actual Greek in Z) had little to do as the Deputy's widow.  We got hints that their marriage was on the rocks (more than likely due to the Deputy having a mistress), but that was never explored.

To her credit, Papas' last scene showcased her abilities: as one of the Deputy's aides tells her the generals had been arrested and the opposition parties had joined, he is thrilled to think a peaceful revolution is upon them.  Papas stares out at the sea, perhaps wisely understanding that for all his enthusiasm, there will be no revolution.  She, the widow, is wiser to the world than the idealist.

Z is a spiritual cousin to The Battle of Algiers.  While less documentary-like than Battle of Algiers, Z chronicles an act of political oppression and its aftermath.  It uses film for agitprop, and mixes action and comedy with a purpose and outrage.  The language barrier at times can cause confusion (particularly since two of the professional thugs/conspirators are named Yago and Vago), but on the whole, Z shows how to mix absurd with anger.