In the history of bitter rivalries, few match the lifelong grudge match between Joan Crawford and Bette Davis.  These two great stars (and strong actresses) hated each other with such venom it chills the soul to know that kind of hatred carried on well after one of them died.  In the new anthology series Feud, the first season is built around the antagonism between Davis and Crawford.  Perhaps people were expecting some awful, almost grotesque catfight between these two divas, something tawdry and vicious.  I expect there will be something to titillate audiences as our limited series continues.  However, in the pilot for Feud: Bette and Joan, what we see is a far more intelligent story about sexism, ageism, the dismissive nature of a cruel industry, and yes, a little bit of a parallel between the real and reel, between the Crawford-Davis war and that portrayed in their only film together (and basis for Feud): What Ever Happened to Baby Jane?

Joan Crawford (Jessica Lange) is facing a very difficult time personally and professionally.  A recent widow, she finds herself in financial straits, and no good offers for a 'comeback' role that would put her back on top, or at least get much-needed money into her account.  With the aid of her helpful girl Friday, Mamacita (Jackie Hoffman), Crawford does find something that might just work.

To get things rolling, she needs two people.  The first is workman director Robert Aldrich (Alfred Molina), whom she worked with on a previous film, Autumn Leaves.  Aldrich himself is facing a tough career slide: his newest project a floundering Biblical epic and with few prospects of his own.  He's intrigued with Crawford's suggestion, finding the project can be mostly self-financed.  He signs on board.

It now needs one more element, one that would cause shockwaves in Hollywood.  Crawford goes to none other than her greatest rival on and off the screen: Bette Davis (Susan Sarandon).  Davis won't admit it, perhaps even to herself, but her career is also going nowhere.  Appearing on Broadway in The Night of the Iguana, this acting superstar finds herself playing second fiddle to an ingénue with nary the talent of Davis.

At first Davis is dismissive of working with "Lucille" (using Crawford's real name), but she bends when a.) Aldrich calls her and b.) she admits that her career could use a lift.  Reluctantly, she reads What Ever Happen to Baby Jane?

Aldrich finds nothing but difficulties when it comes to making What Ever Happened to Baby Jane?  The studios one by one turn him down, particularly because no one wants to make a film with a couple of old ladies or keep to Aldrich's vision.  Aldrich eventually pushes Warner Brothers mogul Jack Warner (Stanley Tucci) into making the film, despite Warner's own hatred for Davis (and lack of fondness for Crawford).

We end with the first day's shooting.  Crawford is the Lady Elegant: giving gifts to all the crew (with Mamacita whispering who is who) but attempting to hide a terrible insecurity about her actual abilities as an actress, especially compared to her more respected costar.  Davis, for her part, just wants to get through this and is finding Crawford's manner grating.  She however, is determined to stand out in this production, and creates an outlandish make-up and wardrobe for her Baby Jane Hudson character.  It will be a counterbalance to the sophistication of Crawford, and now both ladies find themselves in the unlikely position of having to both upstage the other while working together to make What Ever Happened to Baby Jane? a commercial and critical hit.

The war is on.

All this is told in flashbacks with reminiscences of people like Olivia de Havilland (Catherine Zeta-Jones) and Joan Blondell (Kathy Bates).

Bette and Joan is, in its way, not a new tale.  It's actually one we've seen before when it comes to Hollywood: the fight older actresses have to mount to keep their careers going, the thick-headedness and reluctance to try something different from film industry veterans, and the rampant sexism of those in power.  Warner, taking in a massage when meeting Aldrich, starts out by asking the director if either Crawford or Davis are "f***able".  That's how good old Jack measures box office appeal of women: by whether or not you'd screw them, not on their actual abilities.

Throughout Bette and Joan we see how these two veterans of the studio system constantly come up against obstacles.  Crawford not only has to endure the more open sexuality of someone like a Marilyn Monroe, but have her fading stardom thrown in her face by Hollywood columnist Hedda Hopper (Judy Davis in a delightfully vicious role).  She wants a mean quote from Crawford, whom she refers to as 'yesterday's It Girl' on 'today's It Girl' (meaning Monroe) or she'll write about how Crawford left the awards dinner drunk and belligerent.  Davis, for her part, must also see that she very much in the style of Margo Channing in All About Eve, only unlike Channing, Davis chose to keep her career.

Feud also shows that the career difficulties Crawford and Davis faced are things that actresses today still face.  As they are looking over books that might make for a good movie, Crawford comments that there are essentially three types of female parts: Ingénues, Mothers, and Gorgons (read, hags).  This is something that actresses like Jennifer Lawrence, Brie Larson, and Emma Stone (all recent Best Actress winners, and all under 30 when they won) should think on.

Jack Warner in a sense is very much alive: powerful studio bosses who see the worth of a woman onscreen based solely on them being objects of desire, easily disposable once they are no longer 'desirable'.  The struggles, personal and professional, of these two women who are much more similar than either would admit is nothing new. Let's go over the performances.  Lange is a mainstay of writer/director/creator Ryan Murphy, appearing in all but one of his American Horror Story anthology series.  I wasn't quite convinced that Lange was Crawford, finding her voice oddly soft, almost whispery.  She certainly looked the part, and for a while I thought it wasn't going to work.  However, by the end Lange convinced me that she will be more Crawford a person than Faye Dunaway was in Mommie Dearest (which was, well, not quite human).

The brittleness, the insecurity, the desire for respect, the fears of being seen as lesser were all brought together through Lange's performance.

Sarandon matches her as Davis, getting her snappish, crabby, blunt persona.  She, thanks to the script, is also allowed moments of vulnerability, where she in private she knows that like Crawford, she faces a tough battle against growing older (and thus, less relevant).

Molina is the real standout of Feud: the most long-suffering man in Hollywood.  He has to battle against studios who don't want Crawford/Davis, or his ideas, or even him.  Add to that the fact that these two tigresses are slowly coming at him and it would be enough to drive any man bonkers.  Molina shows that mix of exasperation and frustration while trying to balance two demanding stars and a studio breathing down his neck.

As a side note, I heard it somewhere that when it came to What Ever Happened to Baby Jane?, the director shouldn't have been Bob Aldrich, but Clyde Beatty...the world-famous lion tamer.

As mentioned, Davis as the malicious Hopper was delightfully wicked, eagerly manipulating and pushing these two women for her own ends, and at her dinner the fact both were shrewd enough to play nice as a defense against Hopper was a showcase for all of them.

The aspects of Bette and Joan that I didn't particularly care for was the framing story of the interviews.  I can see why that was done: we need people not in the know to have some background, but something about it felt a bit forced, as if we didn't need that framing story at all.  Add to that the fact that Zeta-Jones never convinced me she was anything close to de Havilland (neither in look or sound).

As a side note here, a Season Three of Feud should focus on Olivia de Havilland's lifelong rivalry with her sister, Joan Fontaine.  Season Two will center around the Prince of Wales and his late former wife, but the de Havilland/Fontaine war is ripe for dramatization.

It's also a shame that two of our better and underused actors, Reed Diamond and Mark Valley, were given such small parts as the lovers of Crawford and Davis respectively.

Still, Bette and Joan is a strong start to what looks to be another good anthology series from Murphy.  Here we have Joan Crawford: the great star who wants to be taken seriously as an actress, and Bette Davis, the serious actress who yearns to be a great star.

Fasten your seat belts and bring us the ax. 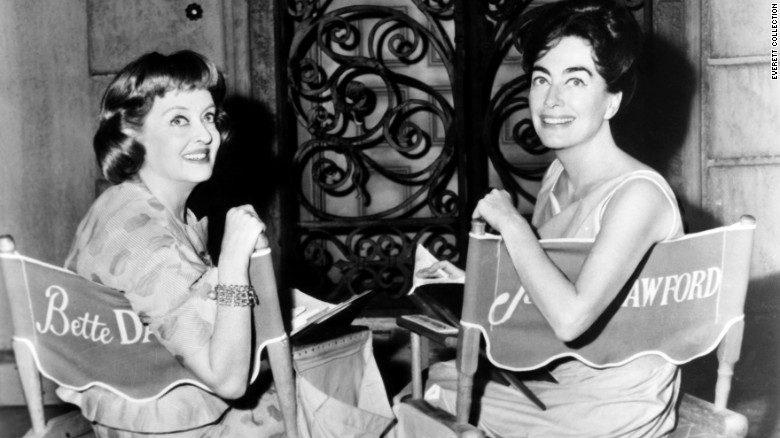 Next Episode: The Other Woman
Posted by Rick at 3:18 AM