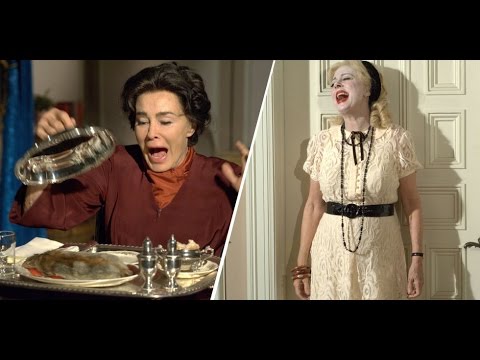 It once was the work onscreen that we judged.  Now we have the backstory, in this case on What Ever Happened to Baby Jane?, the first and last time two notorious rivals and divas, Bette Davis and Joan Crawford, would work together.  Their bitter fight come to a bruising climax in More, Or Less, the fourth episode of Feud: Bette and Joan, and the specter of Oscar hangs over our two dueling divas.  Behind their war over the ultimate status symbol in Hollywood, More, Or Less is also about the difficulties of being a woman in the film industry, both in front of and behind the camera.  Sadly, the more things change...

Joan Crawford (Jessica Lange) and Bette Davis (Susan Sarandon) have private fears about What Ever Happened to Baby Jane?, sensing that if it flops, their careers are essentially over.  Will people watch these two old women (old by Hollywood standards), who are considered has-beens in the industry, revel in grotesque acts against the other?  Things do not bode well for either of them: despite having just made a film, neither can find more work.

Baby Jane director Bob Aldrich (Alfred Molina) has his own worries; he wants to catapult to bigger and better things, but Warner Brothers head Jack Warner (Stanley Tucci) essentially tells him he isn't good enough to be among the great directors.  Aldrich rejects all of Warner's scripts as Baby Jane knockoffs, but he is stuck when forced to direct a Western starring Frank Sinatra.  Ol' Blue Eyes is a monster and nightmare to work with: demeaning to everyone, dismissive of Aldrich as director, and not afraid of threatening gangster violence on anyone who doesn't cater to his diva temperament.

This, therefore, isn't the best time for Bob's loyal Girl Friday, Pauline Jameson (Alison Wright) to try and break into the business as a writer/director.  Pauline has an unexpected ally in Mamacita (Jackie Hoffman), Crawford's loyal Girl Friday who tries to get Crawford to work on Pauline's picture, with Pauline directing.  Crawford, however, has fears about trusting a novice director and female at that, for her first vehicle after her second 'comeback' (Mildred Pierce being her first), and unlike Pauline, Crawford remembers how women directors were shunted off once silent pictures went the way of all flesh.

To the surprise of everyone, What Ever Happened to Baby Jane? becomes a monster hit.  Crawford and Davis are relieved and delighted, but the former soon begins to panic.  She senses that Davis, with the showier part, is running away with the success, and the potential for an Oscar nomination.  Crawford is particularly terrified and infuriated by the idea that Davis will get a nomination and she won't.  Should Davis actually win, it will be her third Oscar, something no other actress had yet accomplished (the fact that Crawford had won only once being more fuel for her wrath).

Davis goes full-force into promoting Baby Jane, making appearances in theaters and television (even belting out a novelty song called What Ever Happened to Baby Jane?, a brave act given she had no singing voice).  Crawford retreats into bitterness and the bottle.  Davis takes anything offered her, even a guest spot on Perry Mason (which given it's television, Davis isn't thrilled about).

Pauline finds her own dreams of moviemaking gone, but Mamacita, her secret ally, tells her over pie (something the health-conscious Crawford forbids her at home, but cannot stop her from having outside her watchful eye) not to fret.  Mamacita has been studying the growth of the American population, particularly on how women are slowly outnumbering men.  She tells Pauline that by 1970 the studios will be forced to hire more women directors and make more films geared towards women because of the majority of the audience will be women.

They'll be forced to cater to women, and Pauline's time will come.

Pity Mamacita never saw the rise of the Marvel Cinematic Universe or the growth of both the teen boy and Chinese market...

In the end, the Oscar nominations come out.  Joan Crawford is told to sit down by Mamacita, and we hear her wail of torment... I find that what has been said about films and/or television shows set in the past is true: they are not so much chronicling what has passed but what is now.  Intelligent television and film (for example, The Americans, also on FX) may take place in a particular time and place (such as the 1980s or early 1960s), but they are in fact commentaries about the world now.

Feud: Bette and Joan may be about the bitter rivalry between these two great actresses.  It is also about how the entertainment industry still struggles with giving women true parity with men on both sides of the camera.

We see this with Pauline, someone who hasn't been strictly in the background but who in More, Or Less emerges as a major part of the story.  Alison Wright is simply an undiscovered treasure (and in a curious turn, one of the major elements of what made The Americans such a great show). Wright balances the mixture of steeliness and vulnerability, between pushing for her own career and conceding the near-impossibility of it.

Pauline is burning with ambition.  She is bright.  She is capable.  She doesn't even want any special favors.  What she wants is a chance, a chance she won't get.

She has all the accruements that would make for a reasonable chance at a writer/director career but one: she is a "She".

What is interesting, to me at least, is how Crawford, who knows how hard the industry is to women, will not help a fellow woman.  Her reasoning is logical: after having her biggest hit in years, where there is now hope of a third wind to her career, she would be putting herself as a hostage to fortune by following up Baby Jane with a picture by an unknown, particularly from a woman at a time where a female director was almost unheard of (in the 'Golden Age', Dorothy Arzner was about the only female director of the era).

Mamacita's analysis is perhaps one of the most insightful regarding the state of the film and television industry today.  She (through screenwriters Gina Welch and Tim Minear) predicts that studios will have to eventually bend to giving women more jobs and make films with a female perspective based on the fact that the audience will be majority-female.  However, that precisely hasn't happened. If anything, Hollywood is becoming more resistant to female-centered films, female directors, and female executives (people like Sherry Lansing and Kathryn Bigelow notwithstanding).

Mamacita's prediction failed, in my view, because studios discovered the teen market, particularly the teenage boys, who wanted action over nuance, explosions over character, and sex/titillation over gender equality.  The roles for women have not improved, even when presented in more 'positive' light (Black Widow, the only female member of The Avengers, not only had the indignity of not having her own action figure upon Age of Ultron's release, but in that film, she was essentially relegated to 'love interest/damsel in distress').  The fact that so many films are made from comic books, dominated primarily by young men, with no end in sight for the Cinematic/Extended Universes, shows how current film will not bend to Mamacita's logic.

I've digressed greatly, but it's an endlessly fascinating topic: how despite being the majority of the population, women still are greatly underrepresented in film.  Add to that a limited shelf-life for actresses once they hit forty (something Crawford and Davis faced), and you see that Feud's subtext of the ageism and sexism in Hollywood is still as strong as ever.

More, Or Less again brilliantly manages to show the similarity between Crawford and Davis right from the beginning when both meet with their agents.  Crawford's phalanx of agents can't (or won't) get her new roles, and Davis is astonished and horrified to find someone old enough to be her son (and looking every bit his 22 years of age) to be her representative. In this opening scene, there's even a nod to Mommie Dearest, when Lange as Crawford appears in a fur hat and black clothes similar to the ensemble Faye Dunaway wore when meeting with Pepsi-Cola executives (and infamously shouting at this group of men when told she was being retired from the Board of Pepsi, "Don't F*** with ME, FELLAS!").

Lange as Crawford makes her almost sympathetic in her fear and paranoia about Oscar, and Sarandon as Davis gives us someone to respect, one who is hustling hard to make Baby Jane a hit.

In a smaller role, Toby Huss captures both the voice and cantankerous nature of the Chairman of the Board.

Again, this framing device of having Olivia de Havilland and Joan Blondell giving a joint interview in 1978 prior to the Academy Awards doesn't work for me.  I'm still hoping things will work out well for this bit, but so far, not buying it.

For its wit, its strong performances (particularly Wright), and for its insight into how the past can illuminate the present, we can't get enough More, Or Less.