Last week, I thought Feud was very much pro-Bette Davis.  Now, with Abandoned!, I think it's swung completely the other way and is pro-Joan Crawford.  Abandoned! displayed in all its naked, ugly 'glory' why the reteaming of Crawford and Davis for Hush...Hush, Sweet Charlotte ultimately collapsed, but also portrayed Davis in particular as the really vindictive, bitter bitch in this war; though Crawford could be petty and spiteful, Abandoned! makes her out to be almost a victim, partially of a Davis-Aldrich axis, partially out of her own decisions.

Production on the now-titled Hush...Hush, Sweet Charlotte appears to be going relatively smoothly.  Joan Crawford (Jessica Lange) is giving a good performance, earning the production team's respect and admiration.  Crawford is doing her best, even giving up drinking while on the job (a remarkable decision given she's a virtual alcoholic). Crawford, however, is worried that her costar, Bette Davis (Susan Sarandon) is undercutting her, particularly given how close and chummy Davis is with their director, Robert Aldrich (Alfred Molina).

Crawford isn't completely off the mark: Davis and Aldrich appear to be having some form of liaison, and she spots Davis in her hotel room apparently mocking Crawford's performance, weakening her fragile ego.  In reality, Davis is actually marveling how Crawford is able to do things in one take, but she is too mean to give her hated rival a compliment.  She is able to make her life insufferable by openly criticizing her, by cutting the script to take lines away from her, and worse, by pushing Aldrich to make Davis associate producer, giving her more power.

All this pushes Crawford back to the bottle.

Davis has become an absolute control freak: not only calling the shots on Hush...Hush, Sweet Charlotte (essentially emasculating Aldrich) but on her daughter, B.D. (Kiernan Shipka).  B.D. at sixteen wants to marry twenty-nine year old Jeremy Hyman (David Foy Bauer), whom Davis dismissively calls B.D.'s "elderly playmate Jerome", but Davis will have none of it. Eventually she consents with the proviso that Davis run the show.

Power gets to Davis' head: dictating Hush...Hush, Sweet Charlotte, controlling B.D.'s wedding plans, and undercutting Crawford, with the nadir being when Crawford's trailer on set is left abandoned while she took a nap.  Crawford is astonished, heartbroken, and furious to find the whole crew left her and Mamacita (Jackie Hoffman) stranded in the Louisiana bayou.

Back in Los Angeles, Crawford thinks she'll get a better deal, but soon she sees the rewrites to the script and how Davis again is exercising her powers on set.  Crawford has had enough and relies on an old Hollywood trick: she becomes 'ill'.  Davis is infuriated that Crawford is holding up production, but there's little she can do.  Aldrich for his part is firmly in Davis' camp, telling Crawford she can essentially take her ideas and stick them up her ass.  The war continues until the 'illness' so weakens the production that Crawford is fired, enraging Crawford enough to throw a vase in Mamacita's direction.  True to her word, Mamacita walks out.

Davis is shocked when B.D. tells her that her 'first marriage' has already occurred, having married the moment she signed the consent forms.  To replace Crawford, Davis vetoes Vivien Leigh (saying there's no way anyone would believe Leigh as a Southern belle, Gone With the Wind notwithstanding and A Streetcar Named Desire not even mentioned).  Davis has someone else in mind, her old friend Olivia de Havilland (Catherine Zeta-Jones).  At first, de Havilland declines (though she suggests that if they need someone to play a bitch, they should get her sister Joan Fontaine).  However, de Havilland eventually agrees, and everyone celebrates by opening up bottles of Coke.

Davis, spiteful, vindictive and bitchy to the end.

Abandoned! is a shift for Feud in that it is as close to portraying Joan Crawford as a victim and Bette Davis as a villain.  There is no way anyone could watch Abandoned! and not be pushed to Crawford's side in this awful battle to the death between these two old divas.

Crawford's sympathetic portrayal starts right off the bat, when we see her making a conscious and determined decision not to drink.  We see how Davis constantly undermines her on-set, how she pushes to cut down scenes favorable to Crawford, how she uses her small power as 'associate producer' to bully her rival, and even in bringing in Coke to mock the unofficial Queen of Pepsi.  Even the most sad scene, when a despondent Crawford awakes from her nap to find the crew has left her, gives Crawford a terrible sense of tragedy, of a woman so whittled down that it just about breaks your heart.

Davis' villainy is further showcased when we see how she was towards B.D., her need to make a production out of her daughter's wedding to please Davis, and how she genuinely didn't care about B.D.'s happiness (misguided as she might have thought to someone thirteen years her senior).

Abandoned! was wise in showing that Davis' friend and costar Victor Buono (Dominic Burgess) warns Davis to control herself, and even lets Crawford gets words of wisdom from her old friend George Cukor (John Rubenstein).  Sadly, by this point nothing can heal their vicious war.  Abandoned! also shows that deep down, Davis and Crawford resented each other because one had something the other thought she lacked.

For Crawford, Davis was 'the legitimate actress', and this fed into her sense of inferiority.  Davis came from the theater, while Crawford came up as a dancer in clubs before breaking into silent films.  For Davis, Crawford was 'the great beauty', a woman admired for her physical attributes while she wasn't (Davis telling Aldrich that she had overheard Jack Warner after her screen-test, 'Who'd want to f*** her?', a comment that demoralized the then-virgin.  Warner's comment that he wished Davis looked like Crawford put the final nail on that coffin).

Helen Hunt (yes, THAT Helen Hunt), directing this episode, makes great use of her actresses, both Lange and Sarandon giving great performances.  I'm still not with Zeta-Jones as de Havilland: Zeta-Jones being almost too glamorous to play the more elegant but still approachable de Havilland.

As a side note, if Ryan Murphy won't make a Feud: Season Three (should there be one) about Olivia de Havilland and Joan Fontaine, he is either missing the boat or far too reverential to de Havilland.

Not everything was perfect, of course.  Hunt's recreation of a bad de Havilland film, Lady in a Cage (which if memory serves correct has been mentioned earlier in Feud) was comically bad (at least I hope it was intentionally bad, for de Havilland couldn't be THAT campy and broad and deliberately awful).  The intercutting between the events chronicled in Feud with the faux-interviews of de Havilland and Joan Blondell (Kathy Bates) still jar.  The latter is not Hunt's fault.  The former is.

However, Abandoned! was a more sympathetic portrayal of Joan Crawford, even if, as Mamacita observed when leaving the hysterical actress, she did this to herself. Bette Davis may have won that round, and had a hit film, but she wins no one over to her side. 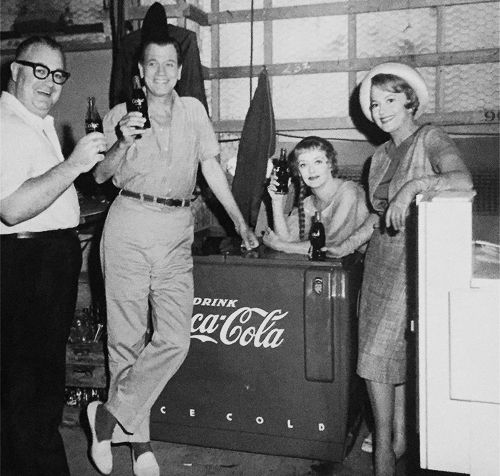 Next Episode: You Mean All This Time We Could Have Been Friends?
Posted by Rick at 8:54 AM