Hands of Stone: A Review 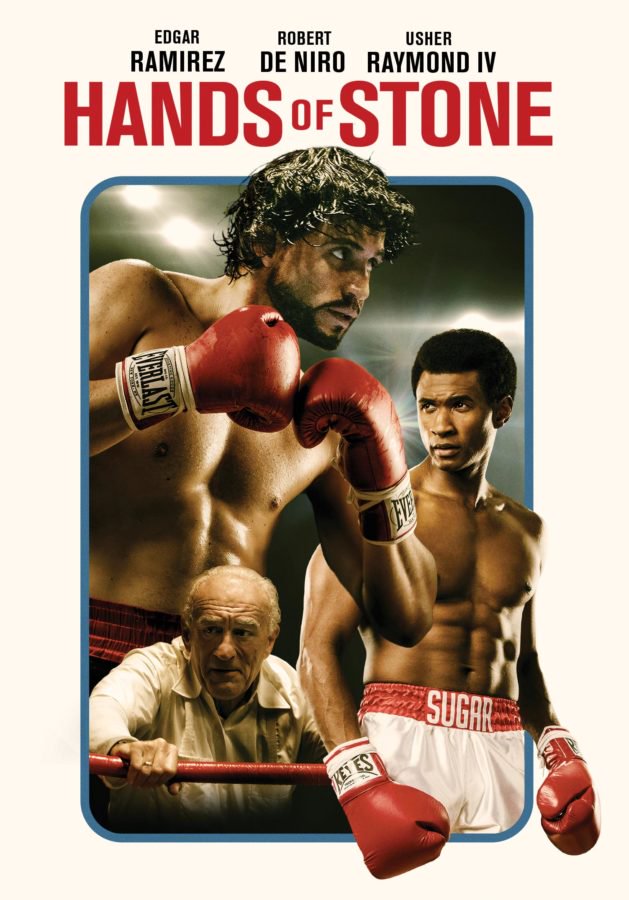 It's very curious that 2016 had two boxing films that featured the same person.  In Bleed For This, the main story wasn't about Ruben Duran, but he was the main antagonist against the film's subject, Vinny Paziena.  Now, in Hands of Stone, Duran is the main event.  Both films bombed at the box office.  Bleed For This being a flop isn't a great loss.

After seeing Hands of Stone, I think it being a flop isn't a great loss either.

Roberto Duran (Edgar Ramirez) is a Panamanian boxer with great skills and a chip on his shoulder the size of the Panama Canal.  He cannot handle the slightest criticism or advise: if you tell him a hair is out of place, he'll verbally harangue you for seven hours on gringo imperialism and what a monster you are.

He's perfect for Ray Arcel (Robert DeNiro), a legendary trainer who has been forced into retirement by the Mafia after Arcel suggested that boxing be televised.  The Mob thought that was idiotic, and tried to have him rubbed out.  A gentleman's agreement was struck: Arcel would live if he never made money off boxing.  Arcel, now in Panama, gets around this deal by pointing out that he's training Duran for free.

Duran ties himself up with Panama in body and soul: illegitimate and illiterate child of an American soldier stationed in the Panama Canal Zone, all his memories are of poverty and arrogance as to his own greatness.  His powers seduce young Felicidad (Ana De Armas), who produces many children for him, with Duran insisting that all his boys be named Roberto (no mention if he named any of his daughters Roberta though).

Duran sets his eyes on two things: getting the Panama Canal from the imperialist gringos and defeating Sugar Ray Leonard (Usher Raymond IV), for to Duran is another gringo (and as a side note, this is the first time I've heard the term 'gringo' applied to an African-American, I always believing it was reserved for Caucasians).  Duran has no problem drinking and sleeping his way through training, showboating at every opportunity to an eager press and sinking to the lowest level possible: when Duran unexpectedly shows up where Leonard and his entourage are, Duran insults Mrs. Leonard, publically calling her a whore and telling them that after the fight, he'd screw her (I had to change it up a bit). Duran wins the fight and the continued love of the Panamanian people, but he becomes more arrogant and intolerable.  He grows lazy and fat, treating his former friends in the worst way.  He doesn't even seem to care too much when Chaflan (Oscar Jaenada), the Fagin to Duran's Artful Dodger,  is gruesomely killed in an accident.  Leonard, for his part, is convinced Duran's boorish behavior was all staged to get him off his game and pushes for a rematch.  Duran's manager, Carlos Eleta (Ruben Blades) agrees over Arcel's objections.

Duran, too caught up with his Panama fixation, isn't eager but does it, and in a controversial move, quits during the fight, allegedly saying "No Mas" (No More), but more out of frustration at Leonard's fast feet than actual exhaustion.  Duran returns to an angry Panama, enraged by his act.

Eventually, he makes a comeback and wins.

Perhaps it is because I don't follow boxing as much as I do, say, baseball, or because I'm old-school when it comes to biopics, but to me, Hands of Stone went out of its way to make its subject so repulsive and unlikable that I ended up rooting for Sugar Ray Leonard.  Duran, as written by director Justin Jakubowicz, was so arrogant, obnoxious, unpleasant, mean/mean-spirited, and annoying (especially whenever he went on and on and on about Panama) that I found him someone I didn't care about.

I figure that you should care about the main character in a biographical film (even one as warts-and-all as Hands of Stone), but what the film ends up doing is making a case against the subject.  You do get the sense of why he was so hostile to Americans in particular (as a child, he was abandoned by his American father and saw a fellow countryman shot down when he tried to pull down an American flag and put a Panamanian one), but his constant arguing about anything, how he was always on the defensive, just kept you at a terrible distance.

Some scenes don't work the way they were intended.  Before the Duran-Leonard fight, Duran meets his father (who turns out isn't a Paul Newman-lookalike, but a Mexican-American).  There is no sense of release or set up or emotion at what should be a major moment in his life.  Duran discussing this exact moment with Arcel makes things worse, showing that the whole scene could have been cut without affecting the film.

Even worse, Hands of Stone sometimes loses focus as to whose story is the one being told.  We go from Duran's story to Arcel's with the introduction of a hereto unknown 'secret daughter' (one so secret not even what I presume to be his second wife, played by Ellen Barkin and who deserves better, didn't know about).  Apart from perhaps one scene of her rejecting Arcel's help she was a silent figure, adding nothing to even Arcel's story.

Exactly whose story is it anyway?

It's a shame since Hands of Stone is filled with some pretty great actors doing great or at least good work.  DeNiro didn't resort to his late-season mugging but showed he did care for Duran.  Usher, best known as a music star, showed he can be compelling onscreen (but shows he has yet to find a script that will really break him out in film).  Ramirez is one of our better actors around (who would have been great in Argo, if Ben Affleck had opted to hire an actual Hispanic to play a Hispanic as opposed to say, casting himself).  He brings that physicality to Duran, but the script fails him with making Duran such a raging egomaniac with a hair-trigger temper.

The best performance I think was Duran's fellow Panamanian Blades, about the only other person to challenge Duran for popularity in Panama (and who also contributed to the soundtrack).  Blades, who like Ramirez has command of and is commanding in both English and Spanish, plays Eleta as both shrewd agent and somewhat caring individual.  It was also good to hear some of his songs playing in the background, reminding us of Blades' far-ranging talents.

There's a story rumbling in Hands of Stone somewhere.   Pity it got lost along the way into being a somewhat dull, meandering story.