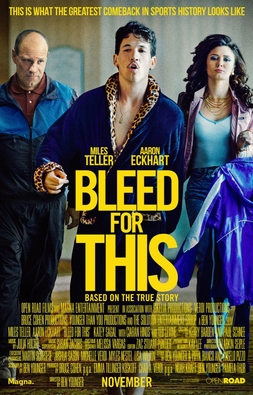 It's interesting that Bleed For This is based on a true story that on the surface would be fascinating but that in execution is shockingly boring.  There's certainly a story to be told here, but the end result is a bit dull, pushing on cliché, more fitting for a TV movie than a potential Oscar-bait.

Vinny Paziena (Miles Teller), who also goes by Vinny Paz, is an up-and-coming boxer with a great deal of talent but also highly arrogant and egocentric. He wins a championship, then tragedy hits.  Vinny is in a terrible car accident, and his neck is broken.  He's barely holding up, physically, and told he may walk again.  Operative term, 'may'.  Over the objections of his doctors, he goes against grafting and opts for a Halo, a device that will hold his head in place and allow for mobility once it is unscrewed.

In that time, with reluctant help from his trainer, Kevin Rooney (Aaron Eckhart, who is just floundering in weak projects that don't befit his talents), Vinny starts secretly working out to the best of his ability.  His father Angelo (Ciaran Hinds) is not happy with this, but ultimately goes along with it.

No one, however, wants to fight Vinny, terrified they'd be the boxer to permanently disable Vinny.  Vinny's hungry, however, and wants to make a comeback and prove himself to be the boxer he knows he is.  He works his way to a match against Roberto Duran: The Hands of Stone.  No one is laying odds on Vinny Paz, but he makes one of the greatest comebacks in boxing, no, sports history.

With all that, why does Bleed For This come across as well, boring?

I think part of the problem comes from the fact that Vinny isn't that great of a person and worse, is still a pretty opaque person at the end.  We gets little hints of the type of person he is (arrogant, obnoxious, egocentric, with a weakness for gambling and women), but after that, he is not a very interesting person to follow or care about.

I'm not saying he in real life isn't an interesting person or someone I should/shouldn't care about.  It's that in the movie he isn't a particularly defined figure.  From what I saw, Vinny isn't trying for a comeback because he loves the challenge of it, or because it's his desire to be a boxer, or because he still feels a hunger for the sport, or even just to prove to himself he won't be confined to a dull life.

I figure he has his motives, but whatever they were get lost.  What is supposed to be a big match against Duran never got a build up to where anyone who isn't invested in either boxing or Vinny's story would care.

Ironically enough, Roberto Duran had his life story told in a feature film this year, Hands of Stone, which like Bleed For This bombed at the box office.  Oscar-bait just isn't what it used to be. We're told he's a great boxer (though he comes across as more grating than great), but we don't see much proof of that.  We hear him talk a great game, but there's little proof in the pudding when it comes to the actual matches.

And seriously, did we have to start the film with a slow-motion walk (and even throw in a little tripping up by girlfriend)?

I don't have much to complain about Miles Teller's performance.  He's committed to the loud, Italian-Rhode Islander accented character (and has a chance to show off how buff he can get).  I read somewhere, though I can't remember where, that Bleed For This is a perfect film for those who want to see Miles Teller beaten up repeatedly, a sign of how far his reputation has fallen (though like the film says, once you're at bottom, you can only go up).

The one that should be embarrassed is Eckhart, who looked like he had a man-bun (it wasn't, just a balding head that appears to peak at the back).  What exactly Rooney sees in Paz that inspires him to keep with him is unclear.  The Northern Irishman Hinds came across as slightly comical as the Italian-American Angelo, one who is a bit shady himself but stands up for/with his son.  Katey Sagal is almost unrecognizable as Louise, Vinny's mother, and her role consisted of her praying while listening to the fights.

I think the big problem with Bleed For This is that it asks us to care when it gives us very little to care about.  I felt a bit bored waiting for me to be inspired or marvel at his comeback.  Everything felt a little rote, something that should be great but is less than the sum of its parts.

Bleed For This is OK, trying to be inspirational but coming across a bit blank.  Far from a knockout, it loses by split decision.