The Librarians: And the Curse of Cindy Review

THE LIBRARIANS:
AND THE CURSE OF CINDY

And the Curse of Cindy is very topical and has a strong message about the importance of finding worth within yourself versus in how many 'followers' you have.   It might even have been a subtle dig at cults and groups accused of being cults (perhaps some with Hollywood celebrities following them). That being said, why then did I find it one of the weakest episodes?  I think it has to do with the fact that the first part played awfully predictable, almost to where you don't even have to guess where things are going.

The Librarians, this time accompanied by Flynn Carsen (Noah Wyle) are sent to investigate what appears to be a cult that is using some kind of magic over the worshippers.  The center of this cult is a mysterious figure known as Cyndi. Who is she, and why does she have so many under her spell?  When they see Cyndi (Rachael Perrell Fosket), her geeky demeanor and appearance puzzles them even more, how someone like that could inspire such passionate adoration (literal adoration, as those not allowed within her compound make due with worshipping a massive statue of Cyndi).

One of the Librarians, Ezekiel Jones (John Kim) knows her from somewhere, but has a hard time placing the face.  The other Librarians, however, have no idea who they are.  It isn't soon before both Carsen and Jacob Stone (Christian Kane) have, despite themselves, fallen under Cyndi's spell and are love-struck.  Jones, who is with Stone when her equally besotted DOSA Agent Adamski (Julian Acosta) brings them, does not fall under her spell, much to the confusion of all save Stone, who is now totally in love.

For their part, Guardian Eve Baird (Rebecca Romijn) and Librarian Cassandra Cillian (Lindy Booth) are still trying to figure out what is the artifact, how Cyndi controls people, and where everyone else is.  With more investigating (and having to essentially kidnap, even tie up Flynn and Stone), they find that Cyndi has put people under a love spell.

Technically, it is not a love potion, but an obsession potion, tells them Jenkins (John Larroquette). It's based on a recipe from Aphrodite herself, now being brewed by Agnes (Jayne Taini), who might not be whom she appears to be.

Cyndi plans to use a DOSA missile to have a massive explosion of the obsession potion spread across the country, which should make people fall in love with her (Operation Aphrodite).  However, the potion needs a secret ingredient: Cyndi's tears.  These tears come when she watches herself on Life Show, a Big Brother-type show where she was coldly evicted.

Jones now realizes that Life Show is where he knows her from, but he knows her as Cindy.  He also finds that, contrary to what Jenkins asserts, the reason he didn't fall under Cindy's spell wasn't because Jones is totally self-absorbed (even though he is).  It's because he's already a fan and thus, doesn't need a potion.  Jones works furiously to show Cindy that what she has mistaken for love is obsession, one that can become dangerous.  An overdoes of the potion makes her 'followers' rabid to where they could literally tear her apart.  Realizing her error, she joins Jones to stop the launch, but now it's Agnes who wants to keep things going.

In the end, Jenkins comes through with the antidote, and Apep flees from Agnes.  Stone, highly displeased that Jones has videotaped his and Flynn's confessions of love, tells him the real reason Jones didn't fall under Cindy's spell.

Jones wasn't just a fan.  He was genuinely in love with her. 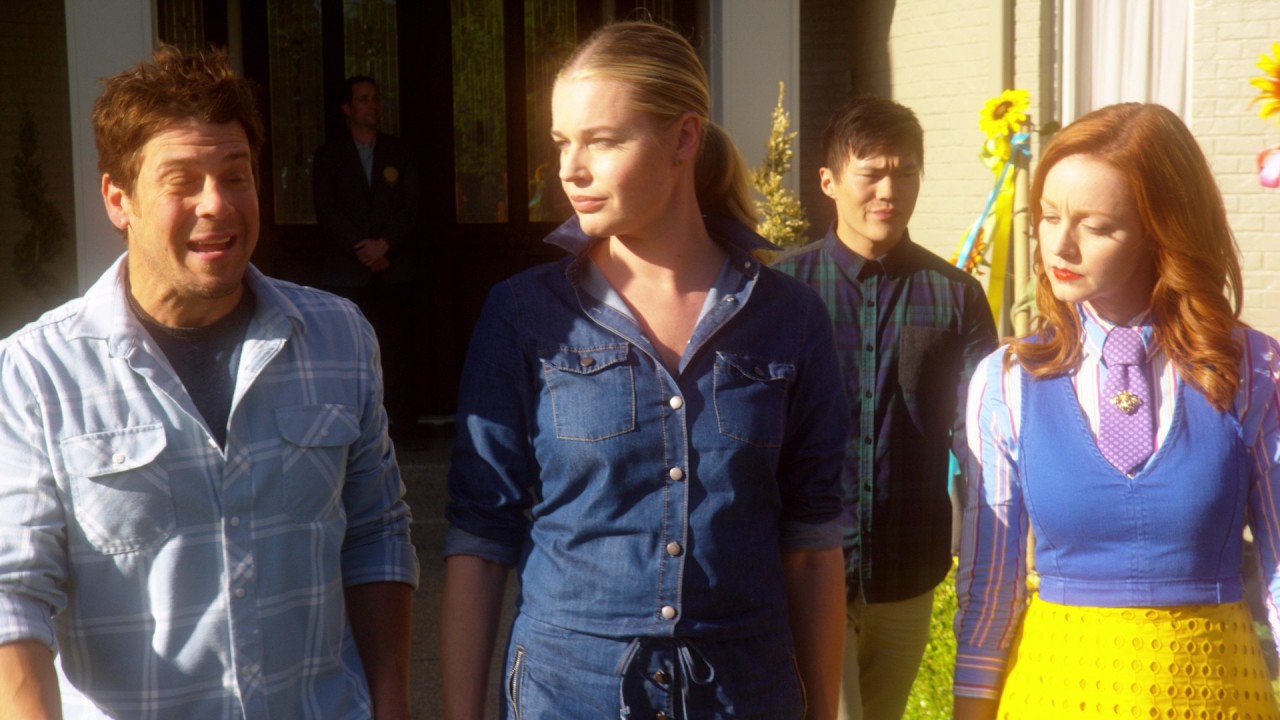 As I said, And the Curse of Cindy has some really clever things within it. At the top of that list is Kim, who at times has had a difficulty fitting in with the other Librarians.  Unlike Cassandra, Stone, or Flynn, Jones isn't adept at a particular field and appears gleefully lackadaisical towards things.  His expertise (if they can be called that) is in larceny.

However, And the Curse of Cindy gives Kim a chance to show a more dramatic, vulnerable side to Jones.  His scenes with Fosket show that beneath the braggadocio of Ezekiel Jones (who does have a tendency to refer to himself in the third person), he actually has a very good heart.  He is a deeper man than he lets on, and Kim has a wonderful monologue where he talks about his own past, how poor and demeaned he was as a child, and how he rose up for himself by finding the greatest love of all (loving himself).

Later on, Kim manages to steal the show yet again when giving essentially the message of And the Curse of Cindy: it's not about who or how many people love you, it's about who you love.  He even suggests that he might have found people worthy of his love (though he'd never say out loud that he loves the other Librarians).

This episode certainly was Kim's best hour, and I think should put to rest any of his or Jones haters who insist he has no reason to be there.

As a side note, I really like Agent Adamski and would so like to see him do another guest appearance, Acosta's mix of seriousness and dry humor quite amusing.

Another positive in And the Curse of Cindy is how it can be read as a wry commentary on fan-bases that are a bit fanatical in their devotion.  It brings to mind people like Tyler Oakley, whose fame is a complete mystery to me (putting videos of yourself squealing like a tween girl over an inconsequential boy band is no reason to have millions of followers).  There are many people who derive their self-worth from gaining attention (like all those 'reality TV' stars, almost none whom I would recognize or genuinely care about...I still don't know who Gigi Hadid exactly is or what merits anyone paying attention to what she does).   And the Curse of Cindy may serve as an antidote of sorts, with its strong plea that true worth doesn't come from the number of 'likes' or 'retweets' or followers on Instagram, Snapchat, Twitter, or Facebook.

With all that, why then wasn't I crazy over And the Curse of Cindy?  Again, I think it goes back to how a lot of it was pretty predictable.  Of particular note is when Stone keeps insisting that they must remain vigilant against Cyndi's spells, only to, you guessed it, fall immediately under them himself.  I also wondered whether Flynn (who was equally besotted) could not have been put to better use.  It's almost a shame that given how quickly Flynn pops in and out of things, he was relegated to the side for most of the episode.

Finally, the final effort to stop Project Aphrodite seemed a bit rushed and not particularly thrilling.

Still, while perhaps my lack of enthusiasm might be due to how I am immune from following 'reality TV' and all the trappings that come with it (therefore finding I can't relate much to things), And the Curse of Cindy is lifted by a strong performance from John Kim and a strong positive message of the importance of finding self worth within yourself, not from fickle 'fans'.

Next Episode: And the Eternal Question
Posted by Rick at 8:55 PM