Having dispensed with both the Best and Worst of 2016 So Far, I now tackled a few other bits that I need to get off my chest.

This list consists of Four Categories which don't fit within a Best Of/Worst Of List.  However, I'd like to offer a few thoughts on them anyway. 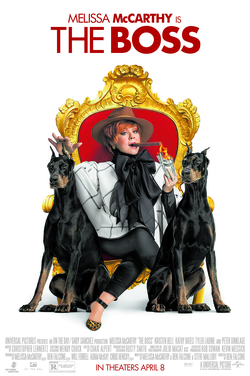 Despite the many times I hear about the comedic genius of Melissa McCarthy, I keep finding evidence against this assertion.  Exhibit One is The Boss, a film that she co-wrote with her husband, Ben Falcone (who also directed the film). It's such an ugly film, with a lot of elements that make for lazy writing: our lead character isn't evil, just in need of a hug.

I think she does well when she's given other people's material and other directors.  Writing herself and leaving it up to her husband to guide her lets her slip into bad tendencies, which gives us films where we see violence on children and straight men simulating oral sex as sources of comedy.

OK, the bra sequence was funny, but the rest, not good.

Exhibit Two in our Melissa McCarthy may not be a comedic genius, and proof that my earlier assertion that she is better with other people writing and directing for her may be wrong. 2016 had a large number of remakes, almost all of them of certified classics, and Ghostbusters was another entry into this sad category.

For the longest time, Deadpool was in my Most Overrated Film, but Ghostbusters took the prize because too many of my fellow critics were willing to give a bad movie a pass merely because it 'advanced women in film'.  I have consistently maintained that Ghostbusters would not have been funny if the leads were all men.  It's just not funny overall.  However, too many critics pushed a film that strained to be funny because they had a separate agenda: they wanted a female-driven film to succeed.  No one should promote a film, particularly a bad film, because they want positive steps for women, or minorities, no matter how noble the intention.

Despite excessive praise for a film that was bad, the public at large rejected Ghostbusters, and the hoped-for franchise (another bane of my cinematic experience) has died a cruel death.  It could have been funny, it could have been good.  If, however, the motive to remake Ghostbusters was to promote equality, it only made things worse and gave ammunition to those who insist women can't open films.

Just as it was a bad decision by Hillary Clinton to run a campaign built in part on 'It's Her Turn', it is a bad decision to tackle on a film like Ghostbusters if its more important to focus on gender equality than on actual comedy.

I'm not going to say Gods of Egypt is a great film.  It isn't, but I don't get the vitriol it unleashed (in the same way I don't get the lavish praise Ghostbusters got).  I know many of my fellow critics hated it, and they have a right to.  However, I think a critic should judge a film not by some ideal of 'art' but by what it was trying to accomplish.  Gods of Egypt was pretty much junk food, but it knew it wasn't a Werner Herzog exploration into the dark recesses of the human soul.

It's about gods of Egypt, a silly, frothy fantasy about warring deities.  I think that part of their hatred for Gods of Egypt was because the actors playing Egyptians were European (a Scotsman and a Dane as the two main deities, with Australian Geoffrey Rush as their father).  In the same way they praised Ghostbusters for being a step forward for women (the #ImWithHer of 2016 films), they detested the lack of multicultural casting of Gods of Egypt.  Now, I can agree that we do need more open casting to give minority and women performers a greater chance to work; however, let's remember...these are mythological creatures.

These gods don't exist.  I don't think anyone, when it came down to it, really cared whether Set spoke with a Scottish brogue or not. There was some positive to all the brouhaha on the lack of diversity in casting: Chadwick Boseman, a really fantastic actor who is also African-American, was cast as one of the gods (Thoth).  It also opened up a serious conversation about diversity in film, something Hollywood still struggles a year off from #OscarsSoWhite.

Still, when I saw Gods of Egypt, I didn't care whether the gods were played by actual Egyptians or not.  I understood they were mythological characters.  Moreover, I was entertained by it all, as silly as it all was.  Maybe because of how silly it all was.  It was a romp, nothing more, nothing less.

The issue of diversity in casting is an important one, and one I have written and spoken about.  I fully support opening up roles for all women and minorities that don't call for specific races or genders (Meryl Streep, for example, could never play Indira Gandhi, and to use an old line from Designing Women, Dustin Hoffman could never play Martin Luther King, Jr.).

However, while Gods of Egypt can be rightly trashed for a lot of reasons, to go after it because the mythological creatures weren't actually played by Egyptians is a bit much.

It's the Curse of the Threequel striking again.  X-Men: The Last Stand was a horror, so much so that they were essentially forced to reboot the franchise with a younger cast, starting with X-Men: First Class.

Side note: X-Men: First Class is one of the few films where I reversed my original decision, going from C- to B-.

That won't happen with Apocalypse, a jumbled effort that retreads past X-Men films and is a copy of so many other comic book adaptations.  It brings nothing new or original to the table, and worse, squanders Oscar Isaac in mountains of makeup as the title character to where he might just as well done a voice-over and let someone else stand in for him.

Tired, run-down, with the veterans sleepwalking through their roles (and diminishing a group of up-and-comers who if the film had focused on would have given us a better film), I truly cannot see how future X-Men films could be worse.  I even can imagine a world with no more X-Men films.

I as a rule dislike remakes.  I'm not opposed to them, merely dislike the idea that one can repeat the same thing and expect it to be better than the original.  When I learned that Disney was going to make a live-action version of its animated The Jungle Book, I thought they are sinking to the lowest level of lack of creativity.

To a point I still worry: we are going to have live-action remakes of Beauty & The Beast, Mulan and The Little Mermaid, adding to those already made of Cinderella, Pete's Dragon and the semi-remake Maleficent (a take on Sleeping Beauty).

I'm still waiting for a remake of One of Our Dinosaurs is Missing, but I sense I'll have to wait on that one.  Yet I digress.

The Jungle Book, far from being a retread, was something beautiful and original, expanding on Mowgli's story while keeping some of the trappings of the original (Bill Murray singing The Bare Necessities?  I'm SO there!).  Enchanting, beautiful, thrilling, and perfect for families, The Jungle Book is a rare example of a remake done right.

In a year that gave us remakes of such films as Ghostbusters and Ben-Hur, it was nice to see that someone knew better than to slavishly copy or try and outdo the original.  Instead, The Jungle Book was its own creation, acknowledging what came before without stomping on the original.
Posted by Rick at 1:00 PM