Author's Note: This is the original review for X-Men: First Class.  I have revisited my original views on the film.  I've decided to keep this review as I originally wrote it. However, my views have changed since then. Scroll down to the bottom for a link to the updated version.

Let's start at the end: you can leave as soon as the credits start.  X-Men: First Class has no teaser scene at the end of the film, which is an innovation for comic book adaptations.  This sets it apart from the norm, and that would give it a certain quality.  The appearances from some of my newly-favorite actors (James McAvoy, Michael Fassbender, Jennifer Lawrence), should also elevate the project and be a redemption against the bitter memories from both X-Men: The Last Stand and especially X-Men Origins: Wolverine.  Alas, this...reboot...prequel...whatever you want to call it, suffers from the sins of its predecessors: a lot of information that has to be rushed through in order to get to the climatic sequence at the expense of knowing who the characters are (both in terms of personality and even in name).

You couldn't have had two more different upbringings than those of Erik Lehnsherr (Fassbender) and Charles Xavier (McAvoy).  The former is a Jewish boy at a concentration camp in Nazi -occupied Poland, the latter a lonely WASP in upstate New York (a bit like Franklin D. Roosevelt, who was President in 1944 when we start the film).  Erik is terrorized (and it's strongly hinted, tortured) into using his powers to control metal by the Mengele-like Dr. Schmidt (Kevin Bacon).  Charles, meanwhile, has found a friend who, like himself, is different: he can read minds, and Raven can take the form of anyone, while her own features are a shocking blue.  Let's move on eighteen years.

Erik has made it his life's effort to hunt down as kill as many escaped Nazis as he can find (think of a Simon Wiesenthal with supernatural powers).  His Top Target is Dr. Schmidt, but more on him later.  Xavier, finishing his dissertation at Oxford, is too wrapped up in his work and the women he can bang to pay much interest to anything else, except perhaps Raven (Lawrence), who is like a sister to him.  In Las Vegas, CIA agent Moira McTaggert (Rose Byrne) is tracking down some shady business.  She makes a shocking discovery: the American general is meeting with Dr. Sebastian Shaw (Bacon), who can control fire, and more frightening, a woman in white turns into ice and a devil-looking man whisks said general back to the War Room from Dr. Strangelove.  Agent McTaggert knows only one person who can help: a newly-minted professor at Oxford who has written about genetic mutations. 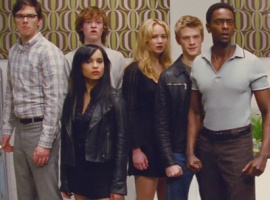 Soon, Xavier and Raven are recruited to track down Dr. Shaw, who is planning something nefarious with nuclear weapons.  Protecting him is Emma Frost (January Jones), said woman in white, who like Xavier can read and enter the thoughts of others.  Shaw has two other henchmen: the devil-looking one and another who can control wind.  Don't ask me for their names, only the devil-looking one had one that was used: Azalel (Jason Flemyng).  However, Erik has also tracked down Shaw, and in a battle gets in the CIA's way.  Xavier persuades Erik to join forces to capture a common enemy.  They also agree to find more mutants and train them.

The duo soon make fast work of it: finding four to join them, Raven, and even Dr. Hank McCoy (Nicholas Hough), who is 'in the closet' so to speak.  These kids are oblivious to the danger coming: Shaw basically creates the Cuban Missile Crisis in an effort to bring nuclear holocaust, and thus kill all the humans to leave the mutants to conquer the Earth.  Now, even with the defection of winged mutant Angel (Zoe Kravitz), the other youngsters have only a week to train to stop the Soviets from placing those missles in Cuba...and for Erik to avenge his parents.

The disappointment in X-Men: First Class is that at an incredible running time of two hours and twelve minutes, the film is far too long for the story it's NOT telling.  It's not an origins story because, like so many other comic book adaptations, we the non-comic book readers never get a chance to know who these characters are (sometimes literally: I had no idea what the backstory for the characters Banshee or Havoc are, let alone who Riptide is--that, I discovered, is the name of Shaw's wind henchman).  There is no real focus in X-Men: First Class, because director/co-writer Matthew Vaughn appeared too interested in showing off what his camera could do as opposed to how best to serve the story.

The best example I can give of this is at the training montage.  The constant splitting of the screen to create various rectangles and squares where we see the mutants learning to use their powers does lend it the appearance of a graphic novel, but it starts to become distracting (especially when you have two angles of the same event being shown simultaneously).  Another poor choice was to show the meeting room of the generals.  Granted, Erin Boyd and Sonja Klaus' set design is excellent in capturing the look of JFK-era 1960s, but what possessed Vaughn to make a deliberate copy of the War Room from Dr. Strangelove.  It might have gone over the heads of some of the audience, but I was half-expecting Mayor Quimby to send for the Esteemed Representatives of Television.

I think the flaw that pushes X-Men: First Class down is what I always find brings any film down: too many hands on the script.  The credited writers number four (Vaughn, Jane Goldman, Zach Stentz, and Ashley Miller) and that is not counting the two people credited with the story (Sheldon Turner and Bryan Singer). That comes to six people who brought this story together, and the fact that so many people were working on the film shows in the final product.  We never get a true focus into what motivates the characters apart from Erik.

We're suppose to believe that Raven (aka Mystique) is Xavier's close friend.  However, she appears to have little conflict in leaving him at a critical point in his life to follow Erik (now Magneto).  The closest I can come to a reason is that they had a romance based on their belief that they are if not better than humanity that they shouldn't change who they are to suit non-mutants.  Given that for most of X-Men: First Class we've had a romance between Mystique and Hank (who becomes Beast), it seems even more strange.  We don't know why Emma Frost is so loyal to Shaw or (as stated earlier) why Angel dumped the group even after she saw one of her compatriots killed.  The story is so sprawling that the characters get short-changed, and we have to sacrifice character development for the next action scene.

Too much time is spent in Erik's Avenging Angel mode before we get him and Charles together, which is a disservice.  If we had a greater focus on the conflict between Erik's and Charles' worldview, we could have seen the rise of Magneto and Professor X.  We have a strong story between how these two friends became fierce rivals, but X-Men: First Class doesn't give us one.  What the film ends up with is a series of events tied together by having the same characters there, rather than having one event flow from another.

The performances were much better than the film deserved.  Fassbender showed the moments of humanity in Erik, and McAvoy makes his Charles a somewhat swaggering figure.  Lawrence did the best job as the conflicted Mystique, who cares for Charles but who has a worldview closer to Magneto than the Professor.  It's hard to judge the other performers since we never get a clear idea who they are as individuals (so much time wasted, yet so little shown in regards to their training).  I question how Bacon could go from German to American English without a trace of an accent (maybe nuclear energy affects the voice?).

There are also other things that made me dislike X-Men: First Class.  Henry Jackson's score had a terrible habit of announcing its presence, especially in the climatic sequence when Magneto raises the submarine and the ensuing battle.  It would be nice to have music that serves the story as opposed to being big and self-important.  I wasn't too thrilled with one of Dr. Shaw's lines when he raids the secret compound where our young mutants are.  "If you are not with us you are technically against us."  From what I know, George W. Bush is no longer President--you can stop using his line as code for "this guy's evil".

I also may be a bit nitpicky here, but when we see a map of the Cold War combatants we see U.S.A. in blue and Russia in red.  If it's the 1960s, shouldn't the map technically have read "U.S.S.R." or "Soviet Union"?  I suppose because the majority of the target audience did not live during its existence and remember the U.S.S.R. as something from ancient history, they wouldn't have particularly noticed or cared.  Yet, I digress.

Finally, there are two cameos from previous X-Men stars: one in the mutant recruiting montage and one after, the first delighted audiences (I wasn't particularly thrilled) and the second went by so fast most didn't even notice it.

In short, X-Men: First Class had a lot of potential to do what good science-fiction/fantasy can do: address real-life issues by placing them in another context.  Sadly, more interest was spent on raising a submarine than in giving the audience true motivation for the character's motives (or even to give them names).  There has to be something wrong with a film where one is more interested in the fact that Brendan Fehr is in the movie than in the movie itself.  Fehr is a good actor (here, playing the Communications Officer), but my mind went to how much I enjoyed his work in the too-short and quickly cancelled Roswell than in what is suppose to be a major battle between the Soviets and Americans, and later between the humans and the mutants.  In the final analysis, First Class needs a refresher course.

Update: Since the writing of this review, X-Men: First Class was revisited as part of the Fifth Anniversary "Second Look" Series.  The grade has been changed from C- to B-.
Posted by Rick at 1:02 AM