JUST GO WITH IT

Perhaps it shouldn't be a shock to see an Adam Sandler comedy where the objectification of women creeps in and where the Sandler character is irresistible to females.  If anything he is consistent in his roles: the man-child whom women want.  However, Just Go With It also carries other unfortunate traits: a shameless misogynist worldview, hints of homophobia, and a general contempt for the audience.

Danny Macabee (Sandler) is about to get married in Temple when he overhears the bride and her party discuss what a loser he is.  Devastated, he leaves and goes to a bar to drown his sorrows.  It is here that he makes an interesting discovery: women will go with him so long as he's wearing a wedding ring.  Cut to twenty years and a major rhinoplasty later.  Dr. Danny, now a plastic surgeon, is still trying this old shtick with considerable success: despite being in his forties, he can still get beautiful women old enough to be his daughters.

Now his loyal assistant Katherine (Jennifer Aniston) looks on with bemused disapproval on his hijinks, but other than that is uninterested.  However, Danny's days as a swingin' middle-aged bachelor may be coming to a close.  A beautiful elementary school teacher, Palmer (Brooklyn Decker), has entered his life and in one magical and surprisingly chaste night, he has found love, and she has found his faux-wedding ring.  Outraged, she storms out. 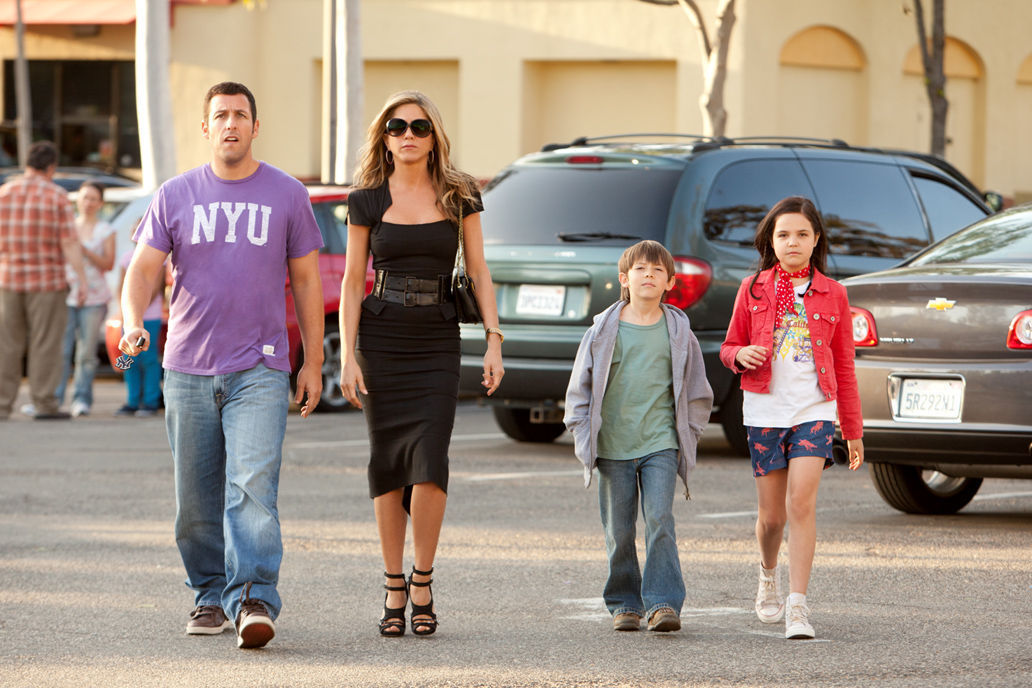 In an effort to win Palmer over, Danny tells her that he is married, but is going through a divorce.  Of course, to have a divorce, we need an ex-wife.  In comes Katherine, who tortures Danny with excessive demands for a new wardrobe and Palmer by making cracks about her age.  Just as Danny is about to see 'Devlin', the fictitious wife's name drawn from Katherine's college rival and a euphemism for using the toilet, off, Katherine gets a call about her kids.  Well, now Danny has children, and in order to keep up this subterfuge he has to talk Katherine's children, Maggie and Michael (Bailee Madison and Griffin Gluck) into all this.

They are willing to go along, but for a price: for Maggie, acting classes, and for Michael, a trip to Hawaii to swim with the dolphins.  He doesn't want to pay, but they create such a scene with Palmer that he agrees to take everyone to Hawaii.  Into the mix comes Danny's cousin Eddie (Nick Swardson), who now tags along as Dolph Lungren, the fictitious lover to Devlin/Katherine.

In Hawaii, all is not going well.  Eddie/Dolph, sporting an insulting/idiotic German accent, can't get into Katherine's bed, and neither can Danny get into Palmer's.  However, in a surprise twist, the real Devlin (Nicole Kidman) is at the same resort, along with her husband Ian (Dave Matthews).  Now it's bedlam with Danny and Katherine pretending to be married while every person is trying to find someone to screw.  Eventually, Danny discovers the joy of 'fatherhood', Michael learns how to swim, Katherine learns that Devlin's life isn't perfect, and I discovered I might have made a mistake in paying to see Dave Matthews in concert.

Just Go With It is just so mean to the females, to all the females, making them into remarkably stupid people without any depth and worse, just a vehicle for men's gratification.  This is especially true for Decker's character.  We're suppose to believe she's a teacher, yet for a teacher she seems dumber than some of her students in her almost naive acceptance of everything told to her.

Every explanation, no matter how bizarre or ridiculous, such as how 'Dolph Lungren' sells sheep on the Internet, she accepts so unquestionably that she would make Rose Nylund look like the Queen of MENSA.  Granted, we should accept that women in almost every Adam Sandler film  are incapable of deep thought (The Wedding Singer being a strong exception), but considering that when we first meet Palmer she is both intelligent and with a sense of decency it seems more insulting (unlike every other woman he's met, she is horrified by the thought he's married).  What could have been an interesting twist (the one woman he wants is the only one that won't give in to him) is dropped almost as quickly as Decker's clothes.

All the characters are rather repulsive in their behavior, even the children.  Actually, let me amend that: especially the children, two of the most repulsive, self-centered, manipulative creatures that have come down the pike in a long time.  Maggie has grandiose aspirations to be a 'grande dame' of film, and to assure this, she adopts a British accent when meeting Palmer, a simply insane act whose explanation Palmer again accepts without question.

Michael, looking all stern, blackmails her mother's boss into paying for a trip to Hawaii to fulfill this dream of swimming with the dolphins without bothering to tell him he doesn't know how to swim.  On paper (via Allen Loeb and Timothy Dowling's script) it might work, but as executed by director Dennis Dugan (who has helmed other Sandler works such as Grown Ups, I Now Pronounce You Chuck & Larry, and Big Daddy) can't make it funny; my theory: the gap between a child forcing a grown man into taking everyone on a very expensive trip and the discovery of his lack of nautical skills is too great. 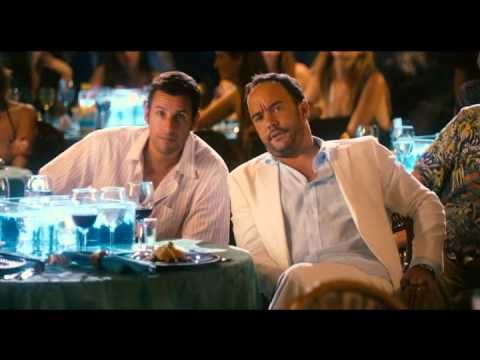 In fact, most everything about Just Go With It is not funny but cruel and mean-spirited.  The whole idea that women are so shallow that they will sleep with a man they think is married makes them look like shameless sluts.  The two main women appear dumb (Palmer) or vicious (Katherine) in how they interact with Danny.  There was no reason for Katherine, even in the guise of Devlin, to make rather sharp comments about Palmer to her face.

I don't want to go into the performances of the men.  Suffice it to say that Sandler didn't stray from his fan base (teenage boys) by making Danny less of a man who won't commit due to heartbreak and more a man who can't accept he's entering middle age and still behaving like a teenage boy; at 44 there is a twenty year difference between him and Decker, so yes, he is old enough to be her father, making the situation even creepier than normal.

I don't want to get into Swardson's cousin so in one phrase I can sum him up: the guy who is even less mature than Adam Sandler.

There are certain moments that are cringe-worthy (seeing Dave Matthews pick up a coconut with his buttocks and not subtle messages that he is gay, with Devlin oblivious to her husband's almost naked desire for sex with other men) and some that have the wrong reaction.  You're not suppose to cheer when a child falls face-first into mud, but the children were so horrible in their fake accents and manipulative manner that you can't help but enjoy them getting some comeuppance.  Just Go With It asks for far too much by having these children be terribly, terribly vicious and mean to Danny and then ask us to feel sorry for them because their own father was not there.

It short, Just Go With It is trite, mean-spirited, witless, with the only thing going for it being beautiful shots of both Decker and Aniston showing off how good their bodies are at 24 and 42 respectively.  It's good to know both work out, but Just Go With It makes no effort to show off their acting talents.  It does go to show that what passes for 'romantic comedies' requires two things: the stupidity of women and the adolescent minds of men.