Everything Must Go: A Review I've found that there are two Will Ferrells.  The 1st Will Ferrell is the Ricky Bobby/Ron Burgundy/George W. Bush type: shallow, empty-headed boobs who live oblivious to how stupid they are yet manage to stumble into great success.  The 2nd Will Ferrell is the Stranger Than Fiction/Everything Must Go type: sad-sacks who are victims of forces out of their control.

It's safe to say that it has been the worse day of Nick Halsey's (Ferrell) life.  First, he gets fired from his job of sixteen years though in fairness to the company, through some fault of his own. He accepts this terrible situation the way he accepts all things: by being passive-aggressive and drinking excessively.  Once he drives himself home, he finds everything he owns out on the lawn, the locks and alarm code changed, and a letter from his wife saying that it's over and he's never to contact her again. I imagine a lost weekend in Denver mentioned by the company must have been the trigger.  To complicate matters, his joint account is inaccessible, his cell phone service is cut off, and the company car he was promised he could keep was taken shortly after: the Swiss army knife he stuck in the tire of the man who fired him may have had something to do with the reneging of that agreement.

Still, Nick has his booze, which is his only tonic.  Circling Nick's yard on his bicycle is a neighborhood boy. Kenny (Christopher C.J. Wallace), and also observing him is his neighbor from across the street, Samantha (Rebecca Hall).  Nick has no intention of repairing anything or leaving his front yard, despite the warning from his AA sponsor/Detective Frank Garcia (Michael Peña) that Nick can't live in his yard.

Nothing doing, Nick believes.  Why should he leave?  Garcia gets him a permit to hold a yard sale, which would give him cover for a few days to stay outside legally.  In the three days he has to hold this 'yard sale', Nick starts to bond with Kenny and takes him under his wing and starts taking some steps to pull himself together until getting a required third-act twist that leaves things in limbo.

Everything Must Go is based on the short story Why Don't You Dance? by Raymond Carver, so writer/director Dan Rush I imagine would have to stretch it out to make it the ninety-seven minutes it is, which is rather short in itself.  He chose to do so by giving us self-consciously quirky moments (Nick having to use Kenny's bicycle or having him witness the strange goings-on of his neighbors), and I've never been a fan of films that are deliberately quirky, that show us the offbeat side of life rather than let it spring from the situations the characters are facing.

As seen in Everything Must Go, Nick is an extremely passive character who doesn't seem to understand that he is responsible for where he is at this point in life.  The film reminded me strongly of another movie about a man who appeared besieged on all sides by a cruel and unforgiving world but who could have solved his problems rather easily: A Serious Man.  Both films have as their leads men are remarkably passive and pathetic, who seem pretty resigned to their fate and who seem to believe their is no true resolution to their dilemma.

There were moments that didn't ring true.  Chief among them is when Nick finds his old yearbook and sees an entry from a girl who wrote that he was a "diamond in the rough".  Even though it's been twenty years, the phone number still works, and thanks to that he's able to bicycle to the home of Delilah (Laura Dern); side note: all I could hear was that damn Plain White T's song, and if you have it in your head now, well, too bad.  Why should I be the only one to suffer?

While it was wonderful to see Dern again, and to be reminded of what a good actress she is, not only is she in the film for too short a time but it does stretch credibility that Nick would be able to find her after all those years. 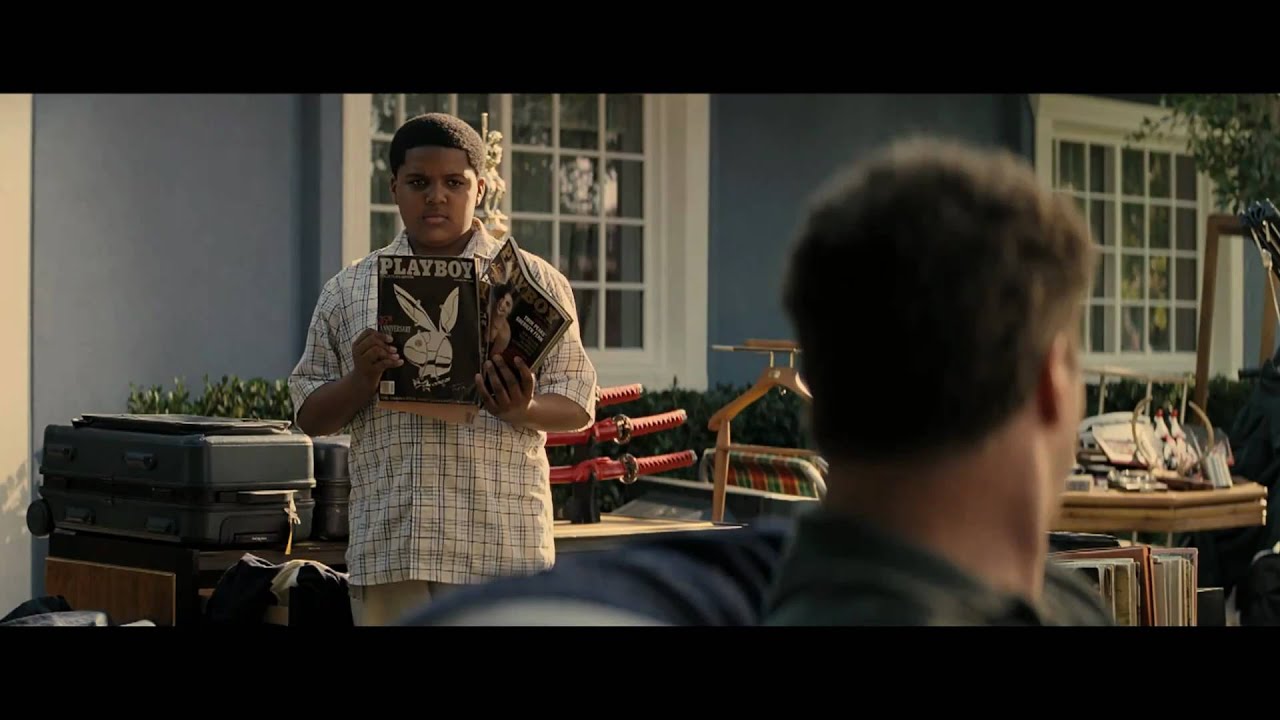 The moments where Everything Must Go attempted comedy fell flat, with the whole "get your freak on" antics of the neighbors almost forced, as if it were added to remind us that the film is suppose to be a comedy.  Near the end, we get a twist involving Nick's wife that also doesn't work; not only is it rather convenient that Nick is at the right place and right time to find out her secret, but is seems rather disingenuous, almost fake.  The twist isn't particularly good or clever, and comes so out of left field it is as if Rush had to write it in almost because it is expected to be there.

I had big problems with the lead character.  Not only is he unwilling to do anything to help himself or have anyone else save perhaps Kenny to help him, he is remarkably passive.  I say this again and again because one would think Nick would be a mental adult to admit that he has to let go, metaphorically and literally.  However, Nick in the end doesn't pull his life together as it is pulled together for him by others namely Kenny, who has found in Nick a friend/father figure.  Everything Must Go from his viewpoint would have been a more interesting film in my view.

This isn't to say Everything Must Go is a bad film.  What raises the film are the performances from an all-around cast save for Stephen Root as the sexually adventurous neighbor.  Ferrell gives a strong performance of a man who really doesn't care much, and although he still has elements of Ferrell 1.0 (his actions against the tires for example), he gives Nick a few moments of hope where this alcoholic may slowly put himself together.  The part in the film where he sees home movies of himself as a child (and thus, his life is really Daddy's fault) don't ring true but Ferrell certainly projects the mixture of hurt and regret Nick has.

We get an incredible performance from Christopher Jordan Wallace.  He is best known for playing the younger version of his father, Christopher Wallace aka Notorious B.I.G. in the biopic of his late father's life.  Judging his performance in Everything Must Go, Wallace has a promising career as an actor should he choose to pursue one.   Kenny is a complex character: someone who sees in Nick someone to emulate but who also accepts the deep flaws the man has.   The character of Kenny could  have been either a sweet kid or a manipulative operator, but Wallace makes him a kid who wants to be more than what he is now, and who finds in Nick a role model and a friend.

Hall has good scenes with Ferrell as the neighbor who cares but who has issues of her own.  I suppose it's expected that she try to be friends with a man obviously falling apart in front of her, but she is sympathetic in her own struggles.  Curious side note: in Everything Must Go we never see Nick's wife (and only hear her voice once) and we never see Samantha's husband (only his back once).  The spouses are not the important thing in the film; rather, it is the fact that they provide a plot device that is.

Dern, as I've stated, was in only one scene, but any appearance from her is welcome.  Her Delilah was a good woman who cared for Nick because of a good thing he'd done in high school.  She, in short, was a real person, and while the situation didn't follow a pattern between her character and Ferrell in this case it was a plus, making Everything Must Go slightly smarter and more real than most films which would have focused on their relationship rather than make it one scene.  This I had no problem with.

One thing I had a big problem with was Peña.  His performance was rather quiet but again, that last-minute twist never rang true for me.  It took me out of the film entirely, and I left slightly displeased.

Everything Must Go has some wonderful performances (from Ferrell, Wallace, and Dern) but there really was no conclusion (not unlike a Coen Brothers film).  If it were not for that last-act "shocking" twist which I felt was tacked on, Everything Must Go would have been a good film about a man who has given up but for whom there is still a shred of hope that he will let go and move on.   On the whole, this is a film that will go, but not far.