The Back-Up Plan: A Review

Not Having My Baby...

The desire to be a mother can be taken care of so simply these days: all that is required is a bit of sperm, some good eggs, and voila: a child is born.  The Back-Up Plan takes the idea of a woman not waiting for marriage to be a mother but throws a wrench: finding the perfect man post-pregnancy.  Despite some flaws within the story, The Back-Up Plan has enough wisdom to know what it is that it makes the viewing experience palatable.

Zoe (Jennifer Lopez, aka J-Lo) is a successful pet shop owner who wants to be a mother.  However, she hasn't found "The One".  Therefore, she opts for artificial insemination, and after the triumph of the procedure not even the rain can dampen her spirit (no pun intended).  However, a stranger who gets into the cab she has hailed can.  In the way only film can make it, this same man keeps appearing and reappearing.

His name is Stan (Alex O'Loughlin), a cheese maker.  He charms Zoe into going out with him, and a romance begins.  However, shortly after starting this relationship, Zoe finds she's pregnant.

Despite her fears, Stan stands by her, even if it means enduring her worries of abandonment and a particularly horrifying birthing scene with the members of her Single Moms & Proud support group.  However, after stating that the children Zoe's expecting (we discover they are twins) 'aren't his', she dumps him.  Eventually, here Nana (Linda Lavin) who has had her own commitment issues with her fiancee of 22 years (Tom Bosley), convinces her that despite what Zoe thinks, Stan is The One.

The Back-Up Plan, to its credit, doesn't even bother pretending to be a deep film;  it does pass itself as a comedy, but the actual laughs are few and far-between.  In the entire movie, I laughed only twice: at a romantic dinner that ended badly, and at the birthing scene of another mother.  In the first one, the comedy, to my surprise,  flowed naturally from the scene, at least the beginning, and actually funny.  The second time I laughed I admit it was more because it was so idiotic that it compelled you to laugh at the stupidity of it all. 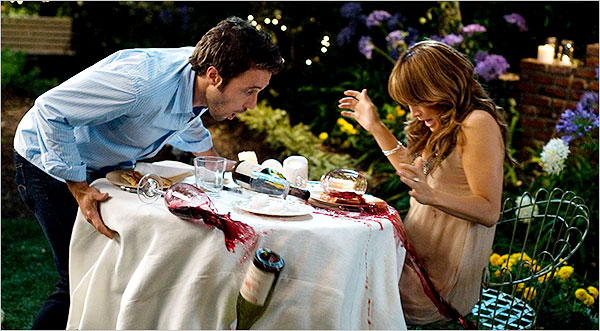 However, Kate Angelo's script would have worked better as a television series than a feature film.  The Back-Up Plan did play out like a sitcom, with some exceedingly exaggerated characters: the New Age-style support group and Zoe's "wacky" sidekicks were especially weak and cliched.  Further adding to the weakness of the story itself was Anthony Anderson's two scenes as "Playground Dad" (that is how he's billed).

Here's how he's introduced: after Stan wanders into a park after discovering Zoe will have twins, he watches the kids in a park, drawing the suspicions of Playground Dad.  They then sit together after Stan tells him how shocked he is to find he's having twins (from the dialogue it makes it sound Stan is the actual father) and Playground Dad gives him a few pointers.  One wonders why Playground Dad in his two scenes wants to frightening Stan so much about the future, or how they got to be confidants.

There were other parts in The Back-Up Plan was trying too hard to be funny when a more subtle approach would have worked.  One particularly grating scene was when Zoe was taking her pregnancy exam.  The entire scene, or any that include her dog, did not work, and if Angelo and director Alan Poul would have done better to not tried as hard as they did to attempt laughter.  Take the surprise dinner scene: the beginning of the comedy worked because it was believable, but the rest of the scene looked rather forced, as if they were going for making audiences roll in the aisles but only ended up having them roll their eyes.

The supporting characters, as I've stated, are thin and almost unimportant.  In the beginning of The Back-Up Plan, Zoe asks a male friend/employee to give her some of his sperm.  We then see him a few times but never understand the relationship: were they just friends, or did they have a past, or just boss/employee, or what?  The same goes for Nana, who is on screen so briefly in two scenes that her character suffers when,  if they had taken a different tact, would/could have been the voice of reason to an insecure Zoe.

One thing that did surprise me was that in the opening scene of The Back-Up Plan, we have Zoe's voice-over narration, something that I've never been a fan of, only to never hear her narrate her story again.  A film that drops voice-over so quickly has issues keeping an even tone: flat-out comedy or tender romance.

Given all that, The Back-Up Plan still has enough charm to it to be a mildly amusing film.  O'Loughlin makes Stan a more three-dimensional character than the script does, and although like most of the characters is rather thinly-written his performance is one of a man who will stand by the woman he's fallen in love with despite his and her fears.  Granted, sometimes he did appear blank, almost as if he were reciting lines, but to his credit I think he did the best he could.

Same goes for Lopez.  J-Lo made Zoe no real different from Charley in Monster-In-Law: a generally sweet woman who finds a dream man only to find complications on the road to wedded bliss.  At times she can be quite charming, almost endearing, and at others a bit distant from her character.  On her performance (as well as O'Loughlin's), I put the blame more on how they were directed than on their abilities to act.

In short, The Back-Up Plan is not a smart film, and it plays like an extended pilot for a television series, or a best-of highlights of the first season.  However, if one goes into it without high expectations and allows themselves to be charmed by a perfectly good premise, admittedly with some flaws, The Back-Up Plan could work as a back-up movie for a rainy day.