Maybe we're just going to have to admit that Twilight will have an impact on the culture for a while and it will be completely bad. Since Stephanie Meyer published her first piece of trash we have had endless variations of the lovelorn vampires and the women who love them series: Vampire Academy, Evernight, House of Night, Morganville Vampires.  It's a mad effort to cash in on this curious freakshow of literature: the bad boy as monster that can't be resisted.

Now, the Twilight mystique is infecting movies.  Case in point: Red Riding Hood.  Certainly things are made muddier by the fact that Twilight director Catherine Hardwicke directed Red Riding Hood, that Chief Swann (Billy Burke) is playing the protagonist's father, and that one of the finalists for the role of EDWARD CULLEN (Shiloh Fernandez) is playing the somewhat brooding main male lead.   I can't say for certain that Hardwicke borrowed from her previous film, but Red Riding Hood can't be a coincidence.

We are in Europe (the script by David Leslie Johnson doesn't make exactly clear where our story takes place, but given the snow and the name of the town, Daggerhorn, I imagine it's a German or Swiss setting), and the village is a remarkably idyllic world, except for the sacrifice the villagers must leave for the wolf.  Valerie, our Red Riding Hood, as a child is smitten with woodsman Peter, our EDWARD CULLEN-like lead.

Ten years later, Valerie (Amanda Seyfried) is still smitten with Peter (Fernandez), but she has been promised in marriage to Henry (Max Irons), the local blacksmith, which I figure in Daggerhorn makes him upper-class.  The match is ideal to her father Cesaire (Burke) and mother Suzette (Virginia Madsen).  However, we have a horrible tragedy: Valerie's older sister Lucie (Alexandra Maillot) has been murdered.  The killer is obviously The Wolf.

The villagers, including Peter, Henry and his father, and Cesaire go off to track and kill the beast, and while they do, alas, Henry's father is killed.   Father Auguste (Lucas Haas) has already sent for a Werewolf Killer, the famous Father Solomon, and it appears he has arrived too late.  However, Father Solomon (Gary Oldman) knows the Werewolf is still alive, and that he is one of the villagers.

Is it Grandmama (Julie Christie)?  Is it the village idiot (Cole Heppell)?  Maybe Father Auguste himself?  Could it be Henry?  Worse, could it be Peter?  It couldn't be Peter, especially after he and Valerie had a roll in the hay, quite literally, after celebrating Mardi Gras Northern European-style (well, celebrating the killing of the wolf anyway, but with the debauchery and costumes, you might as well have had a zydeco band playing).

As Solomon continues his search for who among them is the Wolf, he makes a shocking discovery: Valerie can speak and understand the Wolf.  It is irrelevant that this comes as a shocking discovery to Valerie herself: now Solomon has an accomplice of the Wolf's here.  Therefore, she is to be sacrificed or at least used as bait to lure the Wolf to town.  She manages to escape thanks to Peter & Henry, who've put their differences aside to save the one they love, but even then Valerie is suspicious until she reaches Grandmama's house, and we discover the real identity of The Wolf (who oddly enough, is the only person who hasn't been targeted as a suspect). 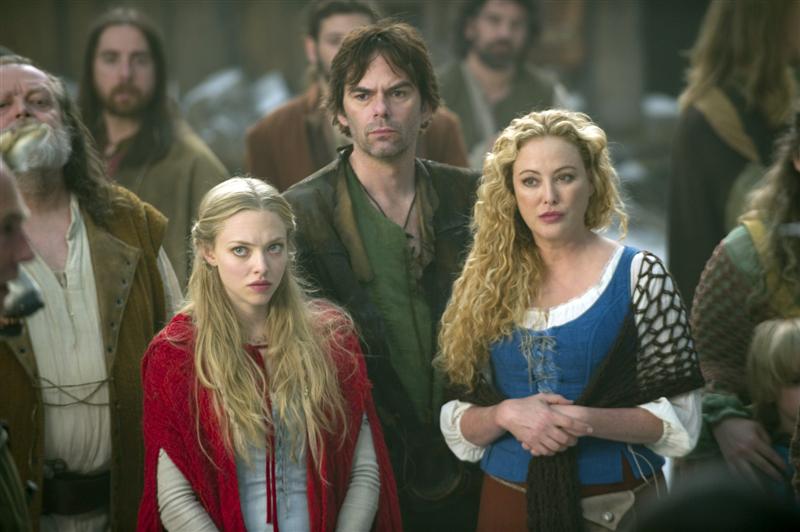 In its efforts to be clever, Red Riding Hood made a glaring mistake that would have solved the mystery in ten minutes.  Fathers Solomon and Auguste make it clear that the Wolf cannot set foot upon Holy Ground, so wouldn't it have been simpler to have every villager take a stroll into the church and see what happens?   For a werewolf hunter Solomon is pretty inept: just making grand pronouncements and having a escort of strong black and Asian warriors carrying a large elephant where he can lock people away.

Side note: I applaud Red Riding Hood's efforts at multi-ethnic casting, but I kept wondering how black and Asian warriors found themselves in medieval Europe, but I digress.

Another problem with the film is that it has a curious obsession with presenting everyone Valerie comes across as the suspect, even Grandmama, then almost as quickly establishes that they couldn't be the Wolf.  A good mystery should allow us clues, sometimes false ones, granted, but clues nonetheless, to allow us to solve the mystery, not throw a suspect our way, have us examine him/her, give us strong evidence for his/her guilt, then say, "Nope, guess again".

When we're given the actual identity of the Wolf, we say, "Well, the only person we haven't been given any indication of is the guilty one".  It might not be exactly cheating, but it doesn't play fair with us.

Red Riding Hood goes for a quasi-real, quasi-fantasy look that is too self-conscious to draw us into the story.  Mandy Walker's cinematography is very pretty, but even in the early part with the children Valerie and Peter you got the sense that this was a set.  Its unreality became a problem: if you look at the village and it looks like something built for an amusement park, you won't ever accept it as being real.  You also started to wonder why it was, to quote a book, "always winter and never Christmas".

The film has very good actors, and Billy Burke, so one would think the acting would recommend it.  Alas, this is not the case.  Any movie that reduces Virginia Madsen to mere decoration just doesn't know what it's doing.  She is underused in Red Riding Hood, as is Christie, who is only there to provide a "Grandmama" to the story.  Burke is still trying to act, but regardless of what his character is, I couldn't shake off Chief Swann roaming in my head.

Oldman was, well, doing his Vlad the Impaler from Dracula, right down to the accent.  I did expect him to talk about how he had "crossed oceans of time" to be there.  It wasn't so much a performance but an imitation of previous work.

Sadly, there were echoes of Van Helsing with Oldman's performance in Red Riding Hood, and some points that just didn't make sense.  His first scene is when he arrives in town with that big elephant and his retinue of warriors.  Among those he brings are his two daughters, but almost as soon as they arrive, they are sent off by Papa in tears, never to be heard from again.  That being the case, why bother introducing them if you're not going to use them?

Our love triangle left much to be desired.  Seyfried did the best she could but was hampered by both a weak script and poor direction.  It was as if she were told to deliver all her lines in a breathy tone though truth be told, I think Hardwicke gave that direction to every actor; I wasn't a big fan of her voice-over narration but then again, I'm never a big fan of voice-over narration unless done right (examples: Blade Runner, Sunset Boulevard).

I can't gauge how well either Irons or Fernandez are as actors since they were, judging from the film, directed to look pretty and pout: the latter for Fernandez more than for Irons.  It's their breathy deliveries and constant forlorn looking at Valerie that became almost a parody of Bella Swoon, I mean Swann, EDWARD CULLEN, and Jacob...Black...Oooh from Twilight .

Yes, Irons and Fernandez are very pretty, but they, like Seyfried, are not given much to do. Given how brooding Peter was in Red Riding Hood, I can see why Fernandez was a finalist for EDWARD CULLEN.

At one point in Red Riding Hood, the film appears to be channeling The Crucible, with people accusing Valerie of evil, but it's played in such a way I did expect the villagers to cry "A WITCH, A WITCH" and have Father Solomon ask "And what do we do with witches?"  Worse for the story, we get all these love triangles and quadrangles and dodecahedrons that it soon begins to turn into Peyton Place: Medieval Times.

Here are the problems with Red Riding Hood in a nutshell: an excessively complicated mystery, a ridiculously somber and serious tone for the story it's trying to tell, a stereotypical village idiot, a lot of moody cinematography (though granted, it was pretty), and ending the film with a strong suggestion of bestiality.  Seriously, you can't have a woman looking at a wolf with a smile and not wonder exactly what they are thinking.

The characters are not allowed to grow and develop and consequently, the actors aren't allowed a chance to show said character's growth and development, because too much time was spent on solving the mystery of who is the Wolf.

It was a good try, but Red Riding Hood takes itself far too seriously to be truly enjoyed.  Even in the parts that could have provided a bit of levity (those Dark Age folk could really get down), the film is determined to be moody and excessively romantic.

In short, Red Riding Hood is not everything that a big bad wolf would want.