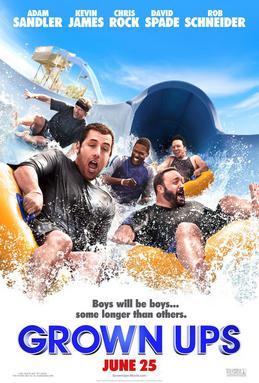 The old commercial went, "It doesn't get any better than this". When it comes to Grown Ups, it certainly can't get any worse.

It's 1978, and five friends who are on an elementary school basketball team win the championship. Thirty years later, each has learned that their beloved Coach (Blake Clark) has died. Now, they reunite for his funeral...at least that's how it starts. These five disparate men (along with their wives, children, in one case a mother-in-law and in another a nanny) stay on in a rented lake house...and stay on....and on...and on...and on...and on...in what appears to be an almost literal Endless Summer.

Side note: if it's 30 years later, would that mean this film is set in 2008? Why then are we two years behind? Just a thought.

Each of them is facing distinct situations. Lenny (Adam Sandler) is a Hollywood agent with three kids: two young boys totally wrapped up in their video games and Vas mineral water and a daughter who is extremely cute and precious, as well as his smokin' hot wife Roxanne (Salma Hayek). Eric (Kevin James) is your requisite fat guy who has a secret situation involving his finances and whose wife Sally (Maria Bello) continues to feed their son breast milk straight from her tit even though the child is "48 months" (that's four years old for those who can't multiply).

Kurt (Chris Rock) is a stay-at-home dad who is passionate about Rachel Ray but who is constantly put down by his wife Deanne (Maya Rudolph), his kids, and his mother-in-law (Ebony Jo-Ann). Marcus (David Spade) is still chasing women left, right, and center. Rob (Rob Schnieder) is a New Age-type married to Gloria (Joyce Van Patten) who is old enough to be his mother (maybe even his grandmother). Now they come together to mourn their mentor and to catch up on old times.

Here is my beef with Grown Ups: it wants it both ways, to be a slapstick somewhat gross-out comedy and simultaneously be touchingly sweet and sentimental. It should have had the courage to pursue one or the other but it keeps going half-way up one road then turns to plunge straight down the other.

Of course, Grown Ups had to throw in all the requisite embarrassing moments and physical comedy (which consists almost entirely of physically torturing someone): it's par for the course to appeal to Sandler's fan base (which I'm guessing are teenage boys and those who think like them). The gentle moments I figure are an effort to appeal to adults, but it's almost a compulsion with Sandler and his co-writer Fred Wolf: every time they can have a completely gentle, sentimental, touching moment, they have to throw in an act of physical violence or gutter humor to try to get us to laugh.

Here are but two examples: getting the kids to drop their cell phones and have fun talking into cup phones: sentimental. Hearing Kurt's grandmother farting into the cup phone: vulgar. Roxanne rediscovering the simple joys of skipping stones: sentimental. Throwing the rock and hitting her son's crotch: vulgar. I keep getting this picture in my mind of Sandler writing the script: whenever he comes close to getting through a gentle moment he puts in a vulgar sight gag to kill the mood then jumping up and screaming "I can't help myself" like Peter Lorre in the film M. 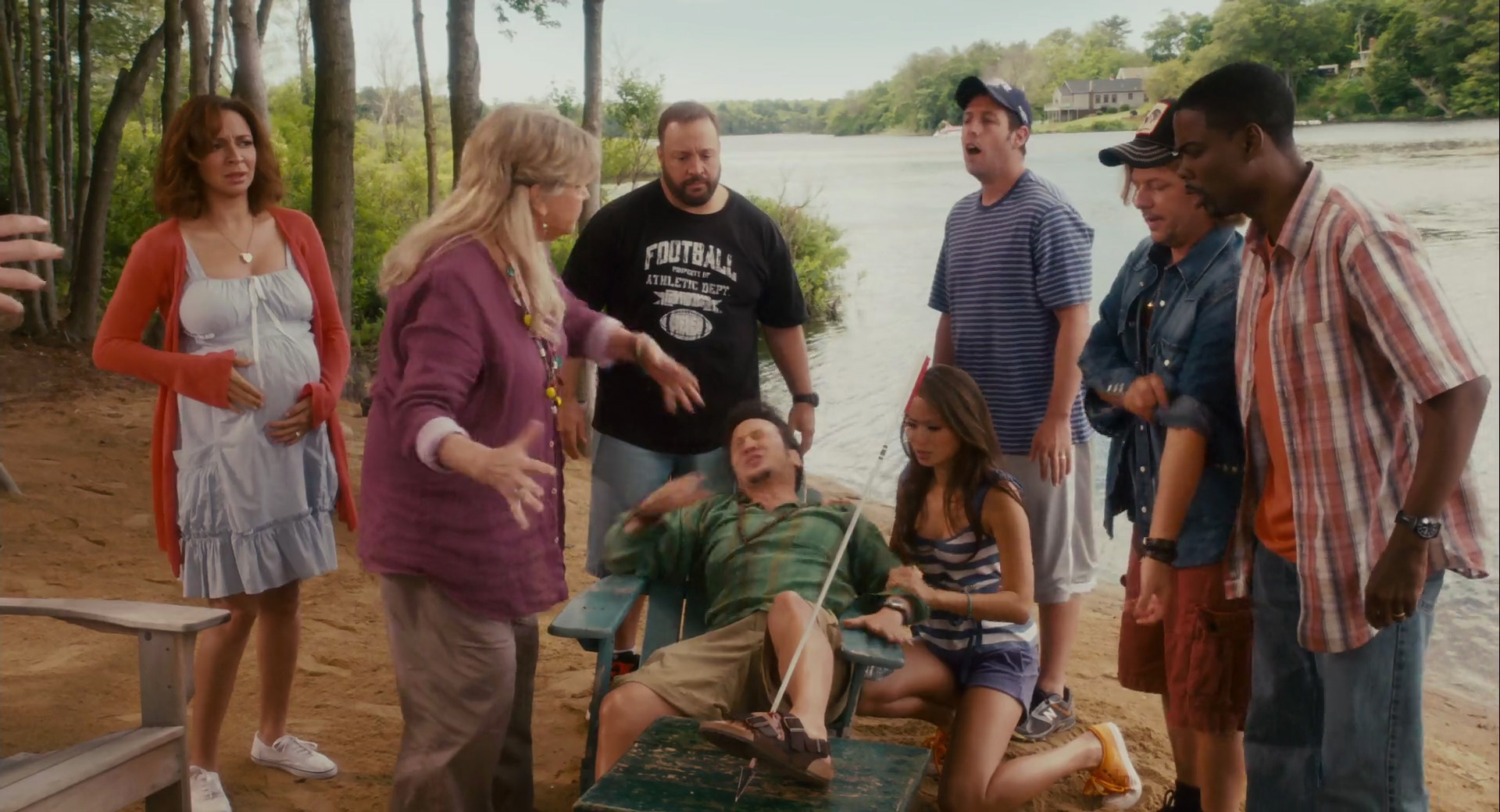 The second problem is its length. At an hour and forty some-odd  (sometimes very odd) minutes it isn't a long film. However, once the funeral and disbursement of the ashes is over the five groups just linger on in the lake house for no discernible reason. In fact, part of the earlier plot involves Roxanne's desire to leave for her fashion show in Milan, but once she discovers the joys of the simple life she stays. In fact, she appears to forget all about her career.

They all stay on and there really is no reason to have had the funeral angle in the first place since it wasn't a necessary plot device to get these guys together. Once they all go to a water park I figured that the writers and director Dennis Dugan all had basically run out of ideas or things to do, so they just kept the characters lingering at the site for no reason other than to stretch the film. As if the lengthy water park sequence wasn't bad enough, they had to stay on for a Fourth of July celebration where our heroes had to do a rematch with the group that they defeated 30 years ago. You wanted to tell these guys (Colin Quinn, Tim Meadows, and Steve Buscemi) to just get over it. An elementary school basketball game can't possibly be that devastating emotionally.

We can't say that anyone acted in Grown Ups (though knowing the talent that Maria Bello is, I actually felt sorry for her whenever she had to pump breast milk to feed a bird for 'comedic effect'). Sandler isn't the man-child he's perfected and he is making the effort to act in a slightly more mature manner but delights apparently in undercutting himself at every chance. Rock also went against his persona by being a househusband, and they did all right though nothing extraordinary. Spade was just himself: an unrepentant bachelor chasing women, even if they were the hot daughters of his friend.

The one I felt sorriest for was James, the constant source of fat sight gags that apparently were funny to everyone around me but not me. I figure the reason I couldn't laugh was because they were so predictable. James breaking his pool when trying to get out: predictable. James not being able to water-ski because he's so fat (HOW FAT IS HE?) that his weight anchors the speedboat...predictable.

This isn't to say there weren't funny moments. Rock's mother-in-law was funny at the funeral: I wanted to know exactly when she stole the hat Aretha Franklin wore at President Obama's Inauguration. I did laugh a bit when Schneider broke character after having an arrow land on his foot (again, that whole Arrow Roulette bit was unfunny, even more so in slow motion) and when Van Patten broke character by mocking her much-younger husband.

Speaking about the funeral, I didn't understand why anyone thought the whole thing was funny. If we're to believe this was a beloved mentor and dear friend, why was everyone taking this like a bad high school reunion picnic? I thought everyone there was unusually cheerful for a funeral. In fact, Hayek was the only one who wore the appropriate black, and their behavior indicated the whole thing was a joke, not a somber and serious affair. If it had been reality, I think the family would have thought their antics would have been highly disrespectful of Coach's memory.

Yes, you have cheap sight gags and forty year old men acting like teenagers in their first weekend without parental supervision and full access to the adult channels. I can't believe a movie (or laugh at a movie) where a guy walks around with a KFC bucket on his head after scattering a person's ashes (actually James wears the bucket twice) or where men are ogling girls old enough to be their daughters.

I can laugh at a good comedy, but one that is so obvious, dumb, and is still trying to be sweet and gentle is one that I can't bring myself to embrace no matter how many people around me do. Grown Ups almost makes me despair that the reason so many people think it's actually funny is because they see themselves in it and think it's true to life.

If that's the case, Dear God Are We In Trouble...